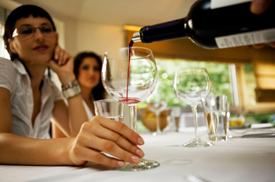 The biggest shock early on was visiting an artisan winery, asking for the “trade discount,” and being asked a question in return… “Are you a winery principle?”

I was stopped dead in my tracks. I was new to the wine business and the tasting room I was working in was filled with people constantly throwing that one out to me. I learned quickly that there is one. When I thought I’d give it a whirl, I was flabbergasted. Now I’ve become a principle, and I know just how exhausting it can be to always be asked by others within my business, what I can give them as an advantage… I’m trying to make an honest living, and have already reduced prices to the lowest common denominator, which are as fair as fair can possibly be.

So, when I get asked by an importer (let’s say), who has absolutely no Petite Sirah in his portfolio, for free tickets to an event, so he can “take care of ‘my’ brands” (yes, I check out that kind of statement), I respectfully tell the importer that there are no trade tickets.

If any one one of the participating wineries has asked to clear someone through, I do it without thinking. It’s the abuse that I take issue with. If I’ve been lied to, I don’t have to take anything away from the group’s meager profits.

I got the following from a winery friend. The winery had a devastating fire and has to rebuild from the ground up. Here’s the story, as you continue to consider the trade discount.

This recounting will give you insight into the plight of small wine companies, including the one who asked if I was a principle… and go forward with more empathy.

Thanks, Jo, for “listening”! Yes, you are so right, I might need to announce more often that, during such stressed times, folks need to be a bit more careful before stretching me so far that there’s no return to civility!

Just to lend a bit more insight, this is what transpired:

Two young (30ish) couples show up with three children under the age of four. (We have a No Minors posting on our doors, but we allowed them to take a table on the deck, because we’re busy, yet). We do point out that we normally cannot accommodate families with children, who are walking age, due to our liquor license rules. (We serve wine by the glass, but we are not a restaurant; hence, the “No Minors.”) One of the men came into the tasting room and stated that he works at two wineries and would like to receive the “industry discount.” I asked him for his card, but he only produced two very worn cards with the names of other winemakers/winery owners.

I told him that I normally do not accept the business cards of others for a complimentary tasting, but that I’d give them 10 percent off any wines purchased. He balked and stated that, since I’ve already had an “attitude” regarding the children being present, he’s lost interest. He went off and the two wives came in to purchase two tasting flights for $10 each, to take back to their table. They spend at least one and a half hours here, taking time with sharing their flights with their husbands (and the wood-fire pizzas we make/offered as complimentary), while the children played with an array of toys on the deck. They eventually decided to pack everything up and leave, with one of the wives purchasing one bottle Pinot Noir ($24) at 10 percent discount. I suggest that her husband ask the business(es) he works for to give him an actual card with his name on it and she said that the reason they have not is that they are just “up and coming.”

Although I saw several red flags here, I must say I was not – at any time – short or unreasonable with them. It is simply sad that these young people seem to have such a sense of expectancy that they’re so quick to lay blame on others who do not agree with them. My husband and I agreed later that we’re not going to allow this to happen again and will, unfortunately, need to send folks away who bring their very young children. I will also add an FYI on our website.

One of my assistants commented (day of incident) that these folks should have gone to Chuck-e-Cheeses. Yep!

Thanks for your always wise and helpful comments. I do appreciate your sensitivity and benevolent stance! This can, at times, be a challenging turf for those who believe in treating everyone with uncompromised kindness and respect, even to a fault. One cannot go wrong with this, but, of course, it can be abused. I do have a sense of humor, as well, which comes in handy, more often than not!

It’s important to note that posting a blog about this incident was perfectly fine by my friend.