Commitment of Joy Sterling and Kevin Jorgeson toward our Earth

These days, Mother Nature is cleverly disguised as Joy Sterling, of Iron Horse Vineyards. For as long as I’ve had the pleasure of knowing Joy, I’ve found this to be true. She has the intellect, understanding, compassion, and resources to pull it off. 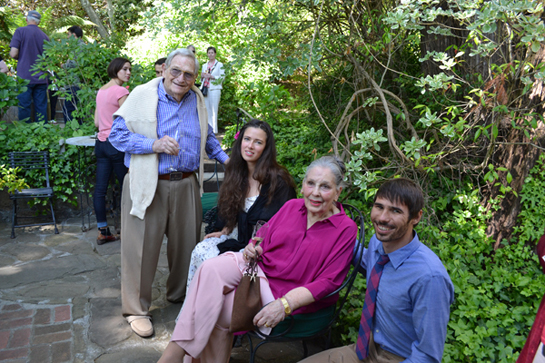 She cares for the earth in ways that many of us can’t even begin to imagine. She has many other sides to her personality, knowing exactly what and when to create as a special sparkling wine with focus coming from Green Valley of Russian River Valley. Her brother Lawrence Sterling grows it, and she markets it, besides being the winery’s CEO. Parents Barry and Audrey Sterling couldn’t be more pleased, you can just see it as they look at what their children are accomplishing.

If there is a possibility of an environmental theme involving something to do with our planet , you can bet that Joy Sterling has already got it covered, while the rest of us are still slapping our foreheads wondering, “Why didn’t I think of that?”

Take, for instance, her guest speak at this past Sunday’s Earth Day celebration. Kevin Jorgeson (above). Kevin, along with his partner Tommy Caldwell, in January of this year, bravely free-climbed the 3,000-foot Dawn Wall of El Capitan, in Yosemite National Park. Kevin was a very fitting speaker. How many of us know anyone with this much guts and glory for facing Mother Earth, and achieving what seemed to be absolutely impossible? This daring duo completed the first ever free climb of this wall, making serious history, by finishing their quest to be the first ever to free-climb the Dawn Wall. 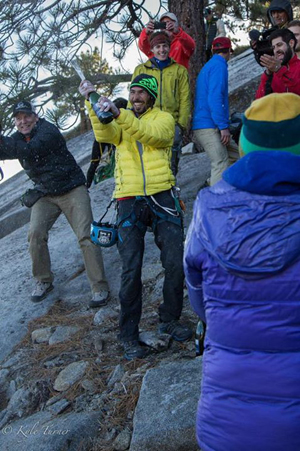 “In 2009, Kevin asked Tommy Caldwell if he needed a partner for his new project on El Capitan in Yosemite National Park. Over the next six years, Tommy and Kevin spent hundreds of days working out the pieces, failing constantly, but keeping the dream alive that one day, they might free climb this route.

“On December 27, 2014, Kevin and Tommy started their “push,” to leave the ground and not return until they either succeeded or were stormed off. [It was] 19 days later, they stood on top of El Capitan having completed what many are calling the hardest route ever climbed.” 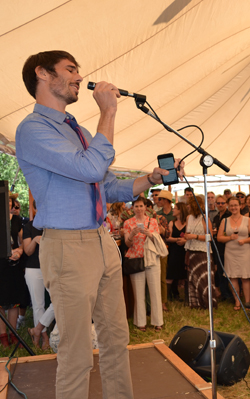 I liked the way he presented himself. He took the microphone from its stand, so he could have free 360º access. The way people had positioned themselves, if they couldn’t fit into the tent, was that they they sat behind the stage. He wanted everyone to be included, and so he was free-form, as he had had to be on the face of that wall. Understanding where the greatest opportunity was at the exact right moment, in order to achieve his goal..

Jose (my partner) told me that he liked what he had to say about dying: You die once and then you die again when people stop talking about you. Some of us are driven to outlast time… Kevin is one of those people. It’s that driving force to not be soon forgotten.

Kevin’s own words on his Facebook page:  My goal after the Dawn Wall is simple: Help turn inspiration into action. And, speaking of his Facebook page, let’s return to above for a moment. Remember what I wrote?

“If there is a possibility of an environmental theme involving something to do with our planet , you can bet that Joy Sterling has already thought about it, while the rest of us are still slapping our foreheads.”

Well… When Kevin and Tommy reached their goal on the top of the Dawn Wall, guess what they had as a celebratory sparkling wine? And guess who made sure that there would also be a limited production… There were only 300 cases produced; so contact the winery, if you’d like to reach new heights, too. www.ironhorsevineyards.come