Earth Day is just days away…. California’s drought versus viticulture is very complex, but has the ability to get people thinking more intelligently and scientifically. And, the Green Parade may have finally just arrived, more than a few decades from the summer of love, peace, and ecology.

I’ve got to hand it to Dan. He’s been a friend for a very long time, and writing about wine for as long as I can remember. He was located in Los Angeles and working for the LA Times when we met. Once he moved into Santa Rosa, we obviously got closer, as did all of his stories based on his location. Dan has always been on the leading edge, provocatively and thoughtfully so. I like what he began with his story about weaning vines off water. I know it’s already begun as a first chapter. It’s the second chapter that’s now become critical of what to do in California viticulture. Winemakers who are already enlightened are now quietly thinking… “Get on board with sustainable efforts, “y’all!”

One wine pro privately shared with me: Grape growing opponents have already begun drawing on this article as evidence that we are wasteful in a time of drought, as evidenced by the comments on the PD website.

Personally, I just wrote about overhead irrigation (or irrigating for frost protection at the absolute wrong time of day, if THAT was the intent). It was an egregious and blatant use of water, right after we had had rain, and it hit a chord for wastefulness.

Dan Berger’s story has begun an important process in a meaningful way. I’d like to add more to what has begun, based on what I’ve also been learning along the way.

So, how does over use of watering get turned around?

The answer is very simple… Science… if science is ever simple. But, it is, if you just pay attention.

Dan’s story included a winemaker who has been intuitively farming for a long time. What he had to say reminded me of my early gardening advice. It came from my 90 year old neighbor when I first met him. I was buying his fruits and veggies, began my own organic garden, and then I took his advice:

Dry farm…. Don’t water your plants. Let the roots go deeply into the ground, so you produce strong plants. They’ll give you plenty of fruits and vegetables that will taste great.

And, he was right. I put up 30 quarts of tomatoes, my first year, without even trying to have so many tomatoes with about five plants.

Does this also apply to California?

Not the same way, at all… The difference between the East Coast and the West Coast is that the East Coast dry farming is dependent upon rain. He didn’t want me to be at my garden every day; however, if it ever did get dry – with no rain for a long period of time – he suggested doing something about it. Still… All of this is intuitive. 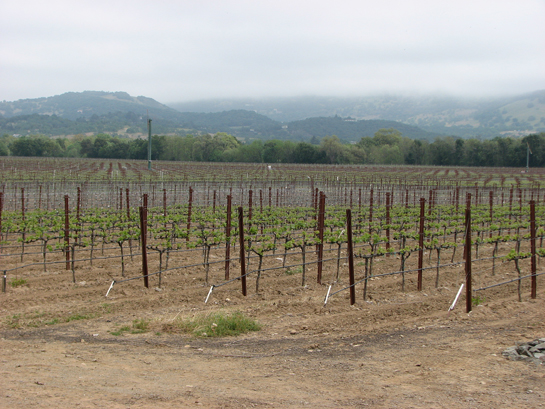 What if science were to enter into the conversation?

I’m very fortunate to be working closely with The Rubin Family of Wines, located in the Green Valley of Russian River Valley. Proprietor Ron Rubin is a master at life. He doesn’t do anything halfway. The Sonoma County vintner throws himself into what he does, paying close attention to every single detail. So, when he bought his 40-year dream winery, he set about hiring every single accomplished consultant, who would become his advisory panel. This is beyond having a staff whose skills were spot on from the onset.

Sustainability was his first concern.

With science to now back it up, it’s the conscientious brands that are already on line with programs like Ron Rubin’s. They’re the ones already quietly leading the green parade, with the help of certified scientists. Those who aren’t there yet, please get on board.  As we approach Earth Day, the timing of the Green Parade to have great success has never been better… or more critical.

As a scientist and practitioner working with the water needs of grapevine vineyards, I applaud the work done by Mr. Williams and agree wholeheartedly with him that many growers are using excessive amounts of water to irrigate their vineyards. However, to extrapolate the experience of dry farmers to that of the industry as a whole is not complete. Some vineyard soils are indeed able to support a vineyard throughout the season without irrigation when practices, such as those applied by growers like Williams, are implemented. However, a large proportion of vineyards cannot withstand the stresses experienced during a portion of the dry summer months experienced here in California, and it is a mistake to assume that all, or even most, vineyards can be farmed in this manner.

That said, as a contributing [scientific] writer for a leading wine industry publication and a frequent public speaker, I have chided the industry publicly for using more water for irrigation than is necessary for vineyards. Unlike many other field and permanent crops, grapevines are thrifty water users and can be very water use efficient if water is managed carefully, using specialized sensors and devices for measuring soil moisture and plant moisture status. We delay irrigation for as long as possible into the summer months, encouraging the vines to extract as much rain-fed moisture from the soil water bank as possible. By doing this, we wean the vines off the “quick fix” of irrigation, as Williams stated, encouraging a deeper and more extensive root system. We have found that repeated years of doing this allows us to delay our first irrigation well into the latter weeks of summer. In fact, in this manner, we do find that some vineyards may be dry farmed. Yet, as I have said, most vineyards require a small amount of irrigation to get them through the period between the depletion of winter/spring moisture and the beginning of fall rains. And by imposing a mild stress on the vines, we put the vines into a water-use-efficient state where we need to irrigate with only approximately 20 percent of what the theoretical water use is for a vineyard during the period of irrigation. The net of this is that we irrigate with only a small fraction of the 100 gallons per vine that Dan Berger referred to in his article about Mr. Williams.

In essence, I have more in common with Williams’ methods than with the industry as a whole, and feel that growers can make great strides in reducing their water footprint by employing best management practices for vineyard water management. But having worked with vineyards all over the North Coast and the state, I can honestly say that to say that all vineyards should be farmed without irrigation is misleading and more needs to done in this regard to make it complete.