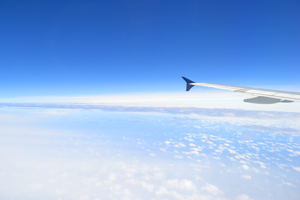 Being fussy isn’t easy, especially when you’ve written about that one yourself. In my story, it’s called Road Warrior Survival Guide. In the air, it’s probably called Air Warrior Survival Guide… Or, at least it should be, because flight attendant service seems to be a very difficult job, these days… Having to put up with people’s beverage choices.

Somewhere over the Atlantic Ocean, on the flight from Charlotte to San Juan, Puerto Rico, I forced a flight attendant to abandon her cart, in what seemed like a smoldering rage.

Maybe I should have asked for the wine, but I was just trying to digest the food I had had, in an airport restaurant. Why don’t chefs of great merit have restaurants in airport locations, for people who love whole foods? I think they’d make a killing (no pun here). Why does it have to be food trucked in by some company like Sysco Foods? Everything is either frozen, already flavored, and/or commodity GMO crap being pawned off as food. An airport, where people who are traveling for business – most especially – are used to having great food and wine choices. Hit an airport and there goes the fine wine and dining neighborhood.

We were going to be in the air for four hours, with the beverage cart coming by after an hour. I asked for the following… Hot water with lemon slices. They have hot water for tea, they have lemon slices for beverages, right? I got the stoic face: no smile, no eye contact, no “just one moment.” I was sitting in a seat low to the ground. She was five feet 11 inches tall… (At least the memory is this image.)

It was just the “turn around, return to the galley,” and all but throwing it at me upon the return. It was just another notch on her “Air Warrior Survival Guide.” I’m betting that it made it into her round table discussion that evening, when the flight attendants and pilots got together to discuss the day’s tiny annoyances. 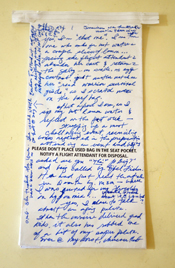 While she was handing it to me, I had to put down the barf bag down, on which I was scribbling about her survival guide versus mine. I smiled and thanked her, while accepting the styrofoam cup she pushed toward me, expressionlessly.

Yes, I’m that one… It’s official, I thought to myself.

“One peep out of you and we’re going to pull into the next airport and offload you,” is what she was thinking.

I finished writing on my barf bag, and then returned to thinking about the adventures I was going to be having in PR. I was comforted in the fact that I was heading to Laurel to get some real food and gracious hospitality, in Santurce, Puerto Rico… Jose’s city of birth on the island, one of my favorite neighborhoods on la isla de encanto.