Once upon a time, Dalst Wine Cellars was a client of ours. If you like a writer, it would seem that that person would make a great PR person for you, right? I thought I was up to the challenge, but I quickly found that I wasn’t. I know how to talk about wine and my database is filled with wine writers, with whom I have relationships. Those wine writers, however, want to write about wine, not anything that I call a peripheral… Wine cellars, wine websites, wine concierges, the list goes on, as I’ve tried most of it, but without the results that I, or our clients, want. So, I’ve always had to pull the plug. I’d rather turn someone down than to let someone down, and when I see that it’s futile, I have to stop taking someone’s money in the hope that some wine writer somewhere will get as jazzed as I was with the initial concept of working with some really great people.

That’s how it was with the Dalst Wine Cellar guys. It wasn’t easy to give up on two really great guys, but I just had to. Meanwhile, I just went back to check and they’re still in business. I’m so pleased.

The Dalst alcoves are made with stone powder from the Comblanchien Quarries (Cote de Nuits in Burgundy, France). The cast limestone is formed into an alcove shape, which acts as a perfect insulator for the wine bottles that are stored inside. The thermal mass of the stone absorbs the ambient temperature of the room and re-radiates it back into the bottles. The bottles are entombed in the cold chamber that’s created by the alcove. This means that the bottles are perfectly cooled and safe from temperature fluctuations, which could result from power outages in a traditional wine storage unit. Because of these inherent properties, Dalst alcoves are able to keep the temperature of the room constant, and are able to do so with less of an impact on the local power grid. 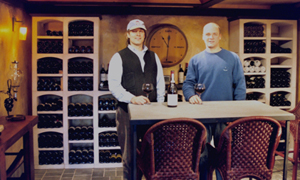 The following are images of Dalst Wine Cellars‘ installations, which are beautiful finished products. 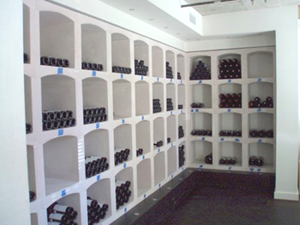 Hedges Cellars of Washington State opened a tasting room in downtown Seattle. The next two images show their wall racking system, and also shows what an installed walk-in unit looks like. These images made me want a Dalst system in my home, sooner rather than later. 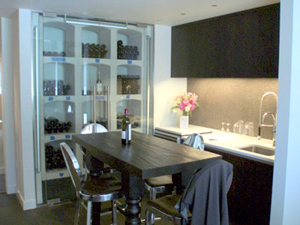 Project manager Perry Ulander of Schuchart Corporation said the following about his experiences working with Dionysi on the Hedges installations, “I had a great crew to work with on the Hedges project, Dionysi included. Not everyone cares about delivering quality products in a professional manner these days. Fewer still value open, direct and honest communication. And then there’s the extremely rare people who can do their job with style and grace with a bit of warmth and compassion thrown in for good measure. Dionysi’s genuine, pro-active concern for delivering quality product in excellent condition in time to meet schedule was greatly appreciated. We had a couple of minor delays in the construction schedule, but when it came time to install, Dalst was there.” 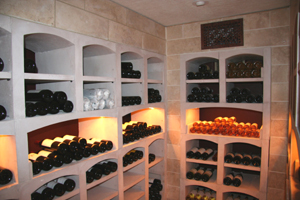 The final image is what Ted refers to as a small to medium sized installation. The aesthetics are gorgeous, and I’m thinking that the lighting is only there to impress friends when they arrive. I remember a similar wine cellar in Sarasota, Florida. John Ash and I were the wine representatives at a winemaker dinner. The home sat on the Gulf Coast with a pure white sand beach in front of the home, and I positioned myself at the edge of the infinity pool, the first I had ever seen at the time – years ago. The home had an amazing wine cellar with all the bells and whistles, but was dark and delicious when all the lights were out. Here’s to wine cellars everywhere. Isn’t it great to know that you now have an environmentally friendly option?