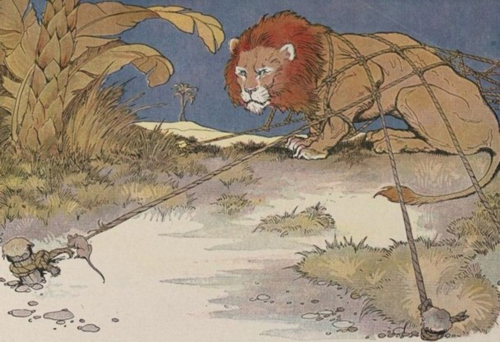 The Lion and Mouse
An Aesop’s Fable

Once when a Lion was asleep a little Mouse began running up and down upon him; this soon wakened the Lion, who placed his huge paw upon him, and opened his big jaws to swallow him. “Pardon, O King,” cried the little Mouse: “forgive me this time, I shall never forget it: who knows but what I may be able to do you a turn some of these days?” The Lion was so tickled at the idea of the Mouse being able to help him, that he lifted up his paw and let him go. Some time after the Lion was caught in a trap, and the hunters who desired to carry him alive to the King, tied him to a tree while they went in search of a wagon to carry him on. Just then the little Mouse happened to pass by, and seeing the sad plight in which the Lion was, went up to him and soon gnawed away the ropes that bound the King of the Beasts. “Was I not right?” said the little Mouse…. Little friends may prove great friends.

It took me a while to learn this one, I have to admit… And, it was taught to me as a child through Aesop’s Fables.

The story is The Lion and the Mouse. It’s been around since 620 B.C.; so most of us have either heard the story, or we’ve read it on our own.

I’ve learned the hard way that this is important PR advice, regardless of the industry. This has been important in all of my careers. (I’ve had seven different ones… including the most important one, motherhood.)

I find myself suggesting this to people, from time to time… Don’t burn any bridges that you don’t have to. I could write lots of words right now about why it’s important to not burn our bridges. I’ll suffice it to say, we do get better with this as we get older… Patience and acceptance of what is at odds with our thinking comes into play more and more as we age.

I have learned over the years, it’s better to see an obstacle as an opportunity for more information, than a be-all-to-end-all stumbling block… Just sayin’…

So, instead of writing more reasons why we’re well advised to not burn our bridges, here’s the story as a refresher, for anyone who’s forgotten and wants to return to the days of youthful stories being handed to us as wisdom…