The importance of an editor ~ So get over it

The importance of an editor cannot be underscored.

I’ve hired one for everything that I put out there, and there are even times when my mistakes might go unnoticed. Not very many of them, but it does occasionally happen.  This is because we – most especially those of us who write the original document, or even blog posts – read things exactly as we know they should be, not as they are.

I’ve had some of my stories printed in magazines, and some mistakes are still missed by an editor. It happens.

When this meme below showed up on Facebook, I thought, “This is so me.”

I’ll never forget the agitated reader, who decided that because he didn’t agree with my opinion, he’d leave a comment about it and dismiss me because I had used the word “then” instead of the word “than.” Never mind that I had an important opinion that was controversial, but he found that one little mistake that meant I was the world’s worst writer. I’m still chuckling, because I have a much different view of what makes a good writer, and it’s not because the writer is a god.

No one is perfect, not even the guy who thought he had nabbed me as a bad writer because I overlooked a mistake, even though I had read the blog over and over again for any mistakes, probably 40 times… (It was a long and winding road for that story.)

Repeat steps #3 and #4 as often as you edit, ending in the “edit” step, if you believe you’ve got it down to a perfect deliverable.

If and when I make a mistake, and I know I make them, I first apologize; especially if it’s a name faux pas.  I feel really awful when that happens. Emotionally, I have to forgive myself for not being perfect, after I apologize to the person whom I’ve offended. But, I also keep in my heart how our First Nation people work: i.e., they always leave one mistake in their work, because this is the point where the spirit of the work is allowed to enter and exit it.

I do love your edits when you contact me, because I appreciate you letting me know that my work has a mistake in it. Feel free to let me know that I’ve tripped again. (I’m the first one to admit how clutsy I am.)

Or, just leave it in the comments section of that blog story. It’s not important to me whether I’m corrected off-line or on-line.

If you’re like the gentleman above, expecting perfection from me as a mark of my competence, you’re going to be disappointed in me. I’m okay with that, too. (I’m not here to please all of the people all of the time. That’s an impossibility, as we all know.) I was always an A student, not an A+ (unless I flunked, because I had gone boy crazy… but, that’s another story). I’m well over worrying about that + attached to an “A.” I’m not a Mother Theresa, a Gandhi, or a Dr. Martin Luther King… Just not my calling, being perfect… And, I’m betting that if you asked each of these people, not one of them would profess perfection as a deliverable; perhaps excellence as a goal, but not perfection as a constant deliverable.

For the record, this blog post was edited 13 times, as I now add this official thirteenth edit. 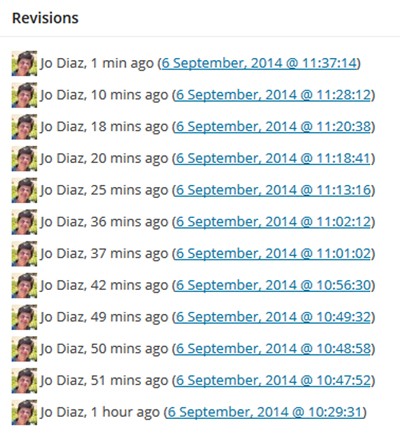