Fusion Food in the Vegan Kitchen and great wine pairings 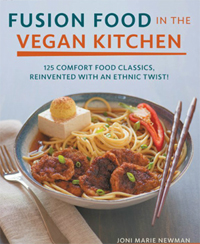 When Fusion Food in the Vegan Kitchen arrived, I wondered how limited the audience could be. Yeah… Not even.

If people think that being vegan lacks flavor or excitement, think again. Jose and I have really pared down the foods that we do eat, and he’s come to have even more discipline than I have. For most of our 30+ years together, it’s been the other way around, when it comes to food. When Jose becomes committed, however, we all just have to step out of the way.

While he’s not a vegan person, he’s still perfectly happy to explore the foods within this world, because now it’s all about finding new flavors. He’s eliminated so much from his diet that fresh ideas and flavor combinations are what he now craves. It’s no longer about quantity. It’s about quality, and he’s become pretty youthful again in this regard.

Fusion Food in the Vegan Kitchen, published by Fair Winds and written by Joni Marie Newman, offers fresh ideas and flavor combinations for anyone, as it would for any vegan on the path of finding culinary satisfaction. The book is subtitled: 125 Comfort Food Classics, Reinvented with an Ethnic Twist!

And, if you’re not vegan, think of the book this way… It’s got the greatest, most unique vegetable dishes you’ll ever see in one place at one time. Consider your friends who come to visit for special occasions. You’ll never have to fret again.

I have an amusing life story that has to do with fretting and having a request for getting something together for a fellow vegetarian in the mid 70s. This story is a warning to never let something like this ever happen to you, by being unprepared.

Peter Frampton was coming to Lewiston, Maine to perform in a concert, which was being produced by my friend Andrew A Gavatsos. Because I was probably the only vegetarian that Andrew knew at the time in that area, I was asked to get something together for dinner for Peter. Honestly, if I had just stuck with what I knew… raw fruits, veggies, nuts, or a nice soup… I would have hit a home run. Instead, I thought that I had to “cook” something. With no internet and no vegetarian books, I got a recipe for cabbage in God only knows what cookbook I had. I was eating mostly raw foods at the time… Not cooking for myself and my daughter. What I didn’t know is that this was a recipe for sour kraut… Yeah, it was that bad, but I didn’t know it, because I had never cooked it, or even eaten it.

Oh my gawd…. I actually delivered it to Andrew and he brought it to Peter. From what I heard, it hit the wall.  Thankfully, I wasn’t there to take a bow, or not…

So, for you, my dear friends, you don’t want to make this mistake. Keep a great book around with flavorful, substantial foods that a vegetarian or vegan might enjoy. (Anything in this book will also satisfy a vegetarian, without it also hitting the wall).

Favorites for me are below, and I’ve also paired them with recently tasted wines. This will give you an idea of what will work for food and wine pairings for these dishes, if someone is so inclined.

And, by the way, I did meet Peter Frampton later in the 80s, and took this picture; but, I didn’t mention the sour kraut, for all of the obvious reasons. (Sorry, Peter.)

Tomorrow, I’m going to publish my favorite food and wine pairings from this book and recently tasted wine, corresponding to one dish from each chapter. I first thought of the wine, then picked a dish. Get ready for some really tasty treats. 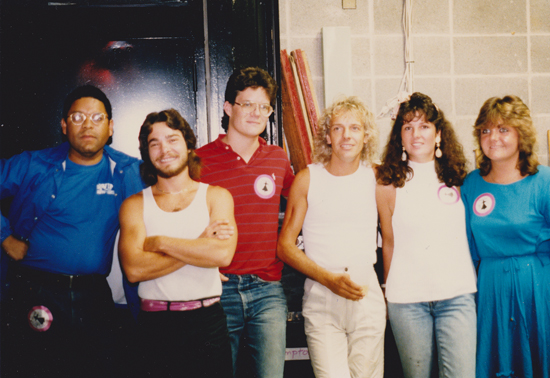