What Labor Day Means to Me 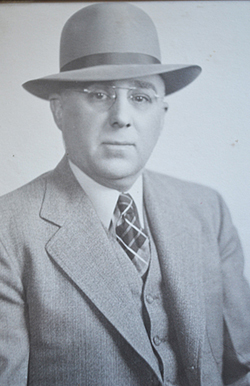 What labor Day Means to Me… is not what you might expect.

It’s not a day to go boating for the last time of the season; or, heading off to the beach one more time, before I settle into apple picking.

No BBQs for me today. Nay… It’s pretty sobering for me.

It’s  time to remember my grandfather Peter J. Bernier. He was my first hero in life. He’s the one who told me, as I walked from high school to his office, like I did everyday after school to say hello to him, that President John F. Kennedy had been shot and we didn’t know yet if he would survive. My walk home, for the next mile was long and lonely. Pipi was a man of  honor and circumstance. His young academic life was ripped away from him, when his family put him into servitude at the Bates Mill, in Lewiston, Maine, at the age of eight years old.

My grandfather was one of those “Boys” in the ad below. He left school after the third grade, my grandmother told me, walking from Lane Road in Greene, Maine to the Bates Mill! That’s a 6.3 mile walk.

Imagine… I mapped it out with a Google walking map. It takes two hours to go in one direction, presumably by an adult, not an eight year old child.

Then Pipi worked hard for nine hours. How did he do that? Did they keep him in that brick housing, across the street from the factory, during the week? [Note the image above. The housing is in the lower left hand corner of this picture.]

He became a very successful businessman, even though he couldn’t read or write. He was a a car sales man, whom people trusted for generations of their families, in the early years of my life. Then he invested in property and became a landlord and realtor. My grandmother did all of his bookkeeping for him. He was so kind and loving to me. My heart is still breaking after all of these years. His own death came when he was only in his 60s (he was 40 years older than I was), on December 3, 1963… only 11 days after JFK had been killed. A double whammy for me…

I grew up on Lisbon Street, where this mill was a little more than a half mile away from my home. I walked past the Bates Mill on Mill Street every day to and from school (St. Patrick’s, Jordan JH, and then Lewiston High School). The building on the front side of the mill was housing. In my day, it was apartments for families, but as generations grew up, with more members of their families working in these mills, they could collect their income and move to an apartment… putting a bit of distance between them and their close proximity to these walls that kept them in impoverished conditions. (I even remember when the housing was torn down.) Perhaps it was originally built to house the children put into servitude, this I don’t yet know. I can’t imagine, however, an 8-year old taking that walk every single day. 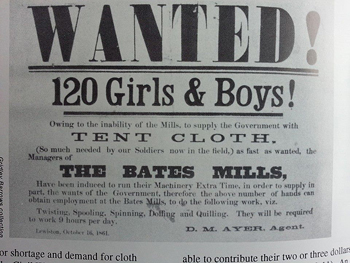 Cindy Hodgdon, one of my Facebook friends, just posted this image of the advertisement, adding the text from the photo, taken from Lewiston Memories, a Bicentennial Pictorial, written by Douglas I. Hodgkin:

1861: “Owing to the inability of the Mills to supply the Government with TENT CLOTH. (So much needed by our Soldiers now in the field,) as fast as wanted, the Managers of THE BATES MILLS, Have been induced to run their Machinery Extra Time in order to supply in part, the wants of the Government, therefore the above number of hands can obtain employment at the Bates Mills, to do the following work, viz. Twisting, Spooling, Spinning, Dolling and Quilling. They will be required to work 9 hours per day.” 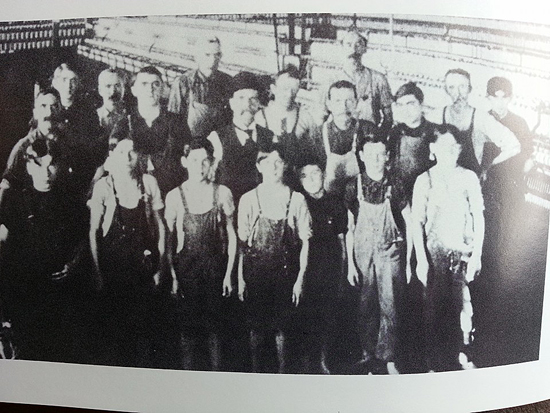 Cindy Hodgdon: In this book it doesn’t state where they slept (most likely boarding somewhere close), but it does state that the youngest were “required to wear short pants to enable overseers to be sure that in the case of scuffles the older were not picking on the younger.”

I’m crying as I write this. I can’t help myself, from the emotionalism that these images represent for me. After my generation is gone, this will all be forgotten by the descendants of those directly impacted by the Industrial Revolution. This kind of sacrifice is now going on in other parts of the world, where labor unions have yet to find a way to enter. Perhaps it will have to come from their own people, who organize against abhorrent working conditions. History will repeat itself, no doubt. And, their future generations will celebrate being released from slave labor working conditions.

Coming from a mill/factory community, I remember the plumes of smoke coming from those tall chimneys every day… And then the 60s brought environmental issues to our attention. Rather than the factories doing something about it, they closed their doors and headed to countries where they could continue to pollute and take advantage of cheap labor… minus labor union dictates, no rules and no regulations… This was the beginning of globalization. I understood it as soon as they closed the mills and factories, putting everyone out of work… generations that knew nothing else and expected to have a job for life. What was going to happen to them all, as big business decisions were being made with no regard for human life in the process? Now, everyone can see what I saw, the day the first factory closed its doors. It’s taken 50 years to see, what my eyes saw with the very first closing.

What Labor Day Means to me is tears… tears for those who made our lives more bearable on this three-day weekend. Hard labor is what our immigrants give to us. Why people are so thoughtless, when it comes to those willing to sacrifice so much, is beyond me.

I’m seeing it again in California, and all over the US, as immigrant hopes and dreams to live in a country, based on our supposed democracy, are being dashed by the very same people whose forefather came here… Now they they’ve got theirs, they’re shamefully and selfishly guarding the same land that their forefathers took away from First Nation People. It breaks my heart that humanity is this way for some of us.

When you raise your glasses this weekend, won’t you join me in thinking about those who made our lives more bearable; our immigrant elders… Without their sacrifices, this would not be a three-day weekend. It would just be business as usual on this Monday, working for the man…