60 different grape varieties, what would you do with them: Acorn Winery has an answer…

A question that I can’t help but ask, “If you grew 60 different grape varieties, what would you do with them?”

The reason for asking this is that I just met with Bill and Betty Nachbaur of Acorn Winery, for a second time. I say second time, because I met with both of them, not just Bill in 2011. See more… 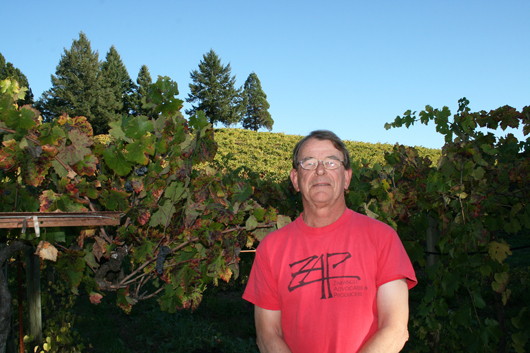 Bill and I were in a wine marketing class together years ago at Santa Rosa Junior College. We spent an entire semester together, and we also ended up in a group presentation as a final exam project. So, we got to know each other better than some of the other grape growers around my Russian River Valley neighborhood. The reason that Jose and I just met with Bill and his wife Betty, along with Francine, their right-hand person (all things helping to run winery marketing and operations related) recently is because it was time… It’s time, because the Acorn was planted 25 years ago, and it’s grown into a really beautiful oak tree in so many ways. With his nose to the grind stone, Bill Nachbaur is still very humble in so many ways. Bill just does what he does, from a passion in his gut that had him leave the comfort of degree in law to pursue a life of grape farming and intuitive winemaking.

FROM THEIR WEBSITE: Bill traded in his law books for books on viticulture, pruning shears, and a tractor when we purchased Alegría Vineyards in 1990. In the early years, he was in the vineyards every day, and Betsy helped out on weekends, but within a few years she too was ready for a change and joined Bill full time.

Bill does know where to get help for what he’s doing… he’s an educated man; but, we can’t call him a gentleman farmer, like we called… let’s just say… Jess Jackson. Jess – also an attorney – didn’t get out into the vineyards and get dirt under his fingernails. Bill does.

As a creative man, Bill took the plants that were on his vineyard site, which was planted over 120 years ago, and began to see them as a daily medley. As he worked with each one, he decided to follow the ancient traditions represented in each of the originally mixed varietal plantings.

Bill’s artists palate was set before him.

They began their grape growing career by selling all of their grapes to other wineries, letting others produce their highly prized Alegría Vineyard-designated wines. Then in 1994, they changed their direction, wanting to make some wine themselves; so, they established Acorn Winery. Their first release, in 1996, was their 1994 Sangiovese.

They gradually began to keep more grapes for themselves, while adding other wines to their portfolio. Now they handcraft seven different wines, while also still selling half of their grapes to other wineries. Several of them are still vineyard-designated:

Their production is only about 3,000 cases each year. All of their wines are made from grapes that they grow themselves at Alegría. Every wine is also a field blend.

From Betsy: Today, after 22 years, we continue to find alegría living in the middle of our vineyards, enjoying the cool Russian River Valley climate, and continuing a long tradition by sustainably growing premium quality grapes and producing acclaimed award-winning wines.

This is what our joyful scientist (Bill Nachbaur) does with his time… every day, each day, nurturing, watching, waiting, tasting, dreaming… Until his Medley is composed…

60 varieties blended into an annual Medley 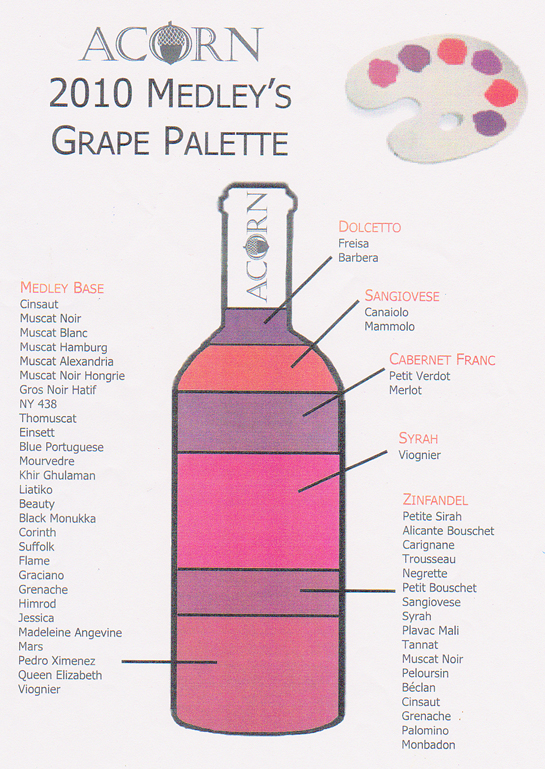