Did you know that the Judgment of Paris had mostly Sonoma County Wine in that “Number One” winner? 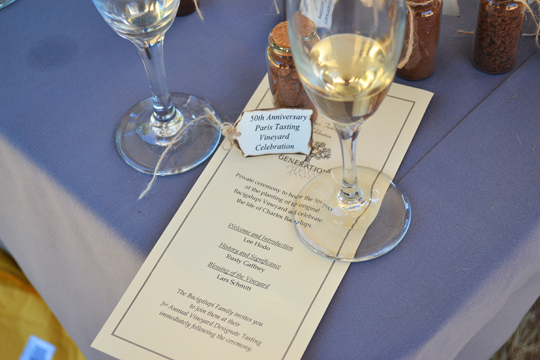 There was traffic on Highway 101 on Saturday morning… Who knew that was going to happen? 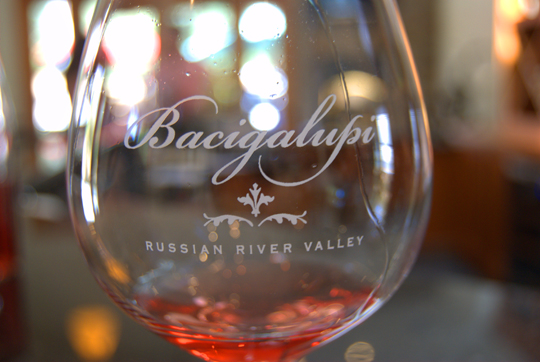 Once we mostly arrived, we were shuttled up the hill into the Bacigalupi vineyards and old farm house. It wasn’t a large group… Maybe 30 of us? But, it was a very special group. We waited a while for Rusty Gaffney, The Prince of Pinot to show up. He was flying up from LAX, but he got caught on Highway 101. No one had imagined that on a busy Saturday in wine country; the road crew would be out, making giant holes in the road, and blocking the right hand lane… But, they did. 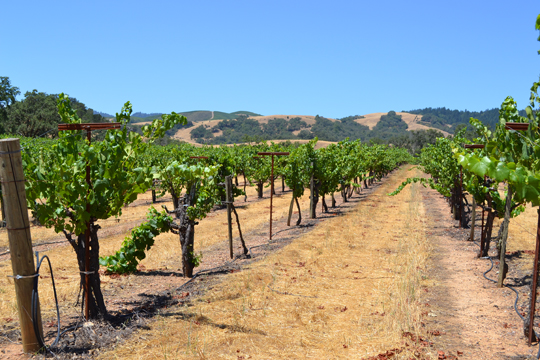 ABOUT RUSTY GAFFNEY from his Website: “I am a retired ophthalmologist who has had a love affair with Pinot Noir for nearly forty years. When I retired in 2001, I decided to devote my energies to writing the PinotFile, an online newsletter that was the first wine publication exclusively devoted to Pinot Noir. Read more…

Rusty had written a speech for the 50th Anniversary Celebration. We all waited for him to arrive, but time was slipping away and we had to move forward… Another event was waiting at the tasting room location, so we couldn’t wait any longer. Lee Hodo (Four Tier Communications) read Rusty’s word, and we all were more than a bit verklempt. So many facts were jammed into that speech. Things that I knew and things that I didn’t know. It seemed to me, since I didn’t stand there taking copious notes… but instead listening… that this speech was fabulous and the world deserves to hear what Rusty Gaffney had thoughtfully composed and to say. So, permission was asked and granted. These are Rusty’s own words and thoughts about the Bacigalupi family. 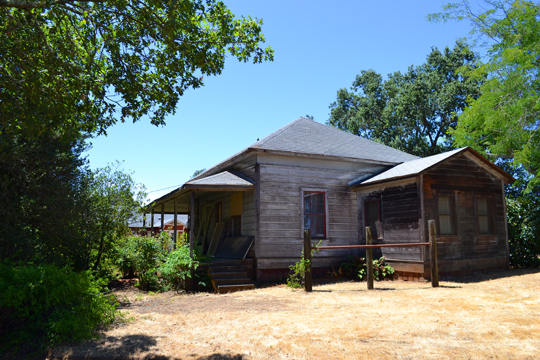 I’m also pleased to say that the Bacigalupi Family has supported PS I Love You since Louis Foppiano, Christine Wells, and I created the Petite Sirah wine grape advocacy group. Always the forward thinkers and supporters of their own industry… The Bacigalupis are remarkable. 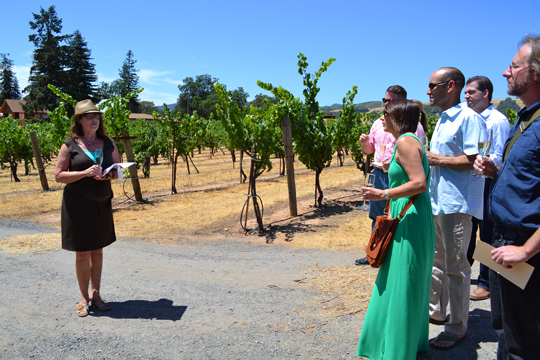 Also, please remember that the following was meant to be Rusty’s notes. I edited a few things (in brackets) for ease of reading. He knew what he wanted to say and did some abbreviating. Enjoy…

It is an honor to speak on behalf of the Bacigalupi Family whose three generations of winegrowing success has played a pivotal role in the history of California wine. I want to confine my comments today on 2 major events: 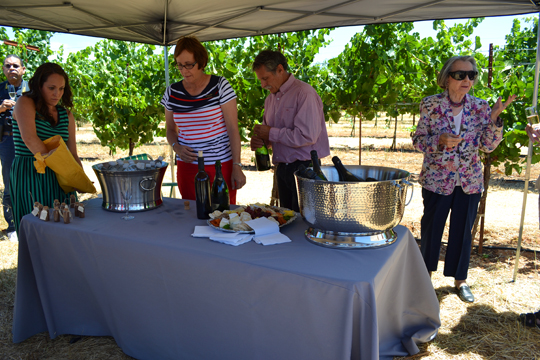 [It was] 50 years ago [that] prunes took precedent over wine grapes in the Russian River Valley, and grapevines were relegated to the poorest ground. The Italian forbearers who had settled the region had planted field blends of Zinfandel, Petite Sirah and Carignane, but there were also extensive plantings of French Colombard, Golden Chaslis and Mission, varieties that are nearly extinct today in the region. Locals had little interest in or knowledge of Pinot Noir and Chardonnay, the two grape varieties that now dominate the Russian River landscape.

John Bacigalupi, the son of Charles and Helen Bacigalupi, who grew up on the family ranch, tells the humorous story of the time his father called Foppiano Winery in Healdsburg to tell him that his crop of Pinot Noir and Chardonnay was ripe and ready to pick. The winery told him they could not be bothered, as they were too busy processing prunes.

When Charles and Helen Bacigalupi put the early plantings of Pinot Noir and Chardonnay in the ground on Westside Road in 1964, most thought it was folly to plant these grapes that nobody wanted.

Charles Bacigalupi, who was born in Santa Rosa, became a successful dentist in Healdsburg, and his spouse, Helen, was trained as a pharmacist. They had always wanted a ranch in the country and in 1956 they acquired the 121-acre Goddard Ranch on a bench on Westside Road in Healdsburg. The ranch had some plantings of Zinfandel, Golden Chaslis, Mission and Muscat as well as prunes and cherries. 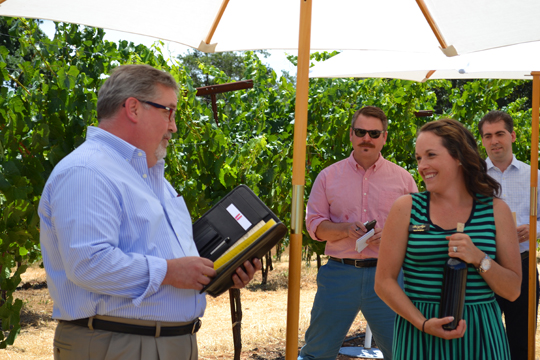 The Bacigalupis had no farming experience but their scientific backgrounds served them well and both had a green thumb. The white grapes on the property brought in little income, so they decide to pull out those vines and replant. Upon the advice of Paul Heck, a patient of Charles’ who was a partner in Korbel Champagne Cellars, and Bob Sisson, the UC Davis farm advisor for Sonoma County, they planted Pinot Noir and Chardonnay instead of the popular Zinfandel. The Bacigalupis had scarce knowledge of Pinot Noir and Chardonnay and only vaguely realized that the two varieties grew in France.

Karl Wente supplied them with Wente selection budwood from his Livermore plantings. [Six] acres of Wente Selection Chardonnay and [six] acres of what was thought to be Pommard clone Pinot Noir was planted on St. George rootstock in 1964. and field budded in 1965.

[SIDEBAR… Most of that film was shot in the town of Sonoma, and at Kunde Family Estates, also in Sonoma, California. What were they thinking when they gave it to NAPA?]

Mike Grgich was the creator of the 1973 Chateau Montelena Chardonnay that won the 1976 Judgment of Paris, a blind tasting organized by British wine merchant Steven Spurrier where the top French wines were squared off against California wines. The shocking victory by two California wines put California wine on the world wine map and changed the global wine market dramatically. 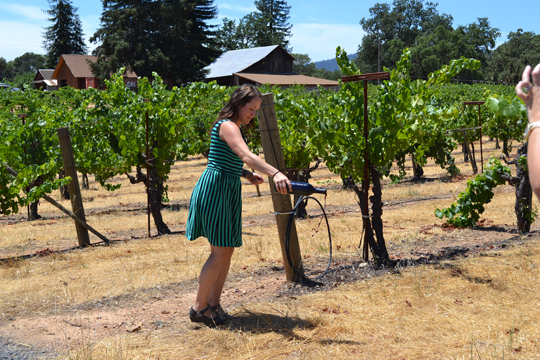 According to Grgich, nine of the best judges in France were chosen, but they couldn’t obtain media coverage because California wines commanded little respect at the time. George Tabor, a journalist based in Paris, came over to the tasting because he had nothing better to do that day.

When the judging ended, the Chateau Montelena Chardonnay received 132 points, more than any French or California Chardonnay. When they revealed the results, some judges tried to correct the scores, but Tabor was said to have prevented that. 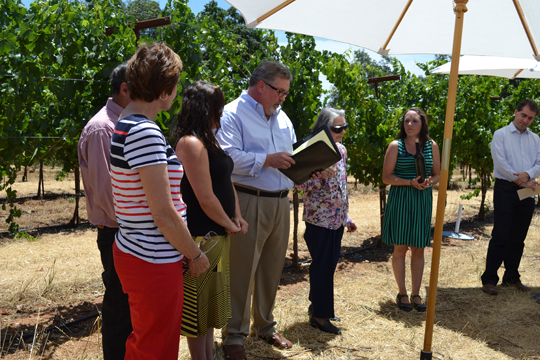 In the afternoon the judging panel tasted the Cabernets and a Stag’s Leap Napa Valley Cabernet came in first place — but received 127 points, so the Chardonnay was the champion of the Paris tasting.

Tabor would later publicize the results and even wrote a book about this seminal event, “Judgment of Paris.” A 2008 popular movie about the event was titled ‘Bottle Shock.’
The 1973 Chateau Montelena Chardonnay that Grgich crafted is included in a current Smithsonian exhibition “101 Objects that Made America” along side Abraham Lincoln’s hat, Alexander Graham Bell’s telephone and Neil Armstrong’s space suit.

The 4-acre Paris Tasting Block of Chardonnay on the Bacigalupi Ranch is still thriving and currently the grapes are sold exclusively to Rudd Winery in Oakville, and bottled under the Edge Hill label. Grgich never bought any more Sonoma County grapes after the 1973 vintage, preferring to produce Chateau Montelena wines from Napa Valley sources exclusively.

Although the results of the Judgment of Paris were widely publicized, the vintners in Napa Valley downplayed the fact that most of the Chardonnay grapes came from Sonoma County. The label on the 1973 bottle underlies the attempt to promote Napa Valley, stating the source as “Napa and Alexander Valley.”

Through the years, the Bacigalupi family added other vineyard sites and now has three Russian River Valley estate vineyards: Goddard Ranch, Bloom Ranch and Frost Ranch. Until 2002, the Bacigalupis sold all their grapes to numerous Napa Valley and Sonoma County wineries. Today, Bacigalupi estate grapes are part of many winery bottlings and the Bacigalupi Vineyard is often designated.

Beginning in 2013, the name of the winery began transitioning from John Tyler Wines to Bacigalupi Wines to honor the legacy of winegrowing of the Bacigalupi family. The first release bearing the Bacigalupi label was from the 2011 vintage and were vinified by the new consulting winemaker, Ashley Hertzberg.

Visit the Bacigalupi Wines website at www.bacigalupivineyards.com for more information and to acquire the wines. 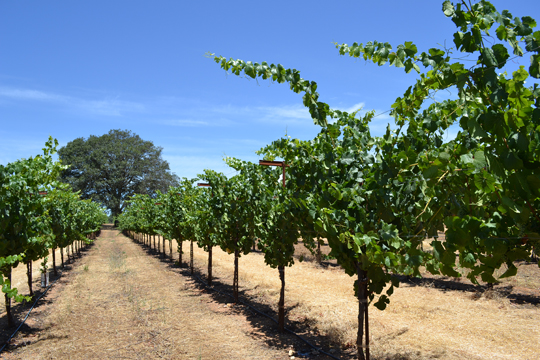