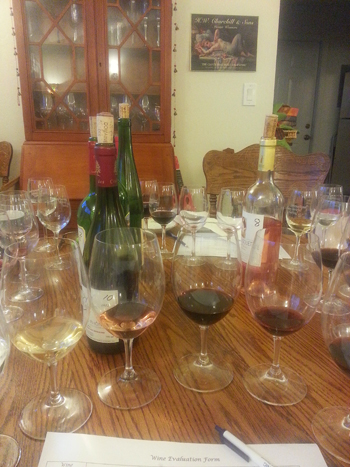 Jose and I, with our friends Sue Straight (Wine Wench) and Mindy Joyce (Sugar Fly Marketing), recently tasted 17 imported, organic wines. It’s always insightful, when the wines are from another countries. And this time, most especially, since they were all organic.

I’ve been an organic proponent since the 1960s. It just made great sense at the time (and continues to), as my friends and I became really thoughtful about a lot of things. An entire generation became aware of peace, love, and happiness; which was spurned on by social injustice and a war that was someone else’s civil battle to fight, not ours… But our friends were still drafted and sacrificed to feed a war machine. This made us furious, and for many of us, it made no sense at all. So, dropping out became a really groovy option to the reality of the times. It also gave us a lot of time to think about how we could each work toward a better world… And, organics led the way.

Today, many of us still think “organic;” since today’s United States options have become really dangerous, regardless of what anyone or any company wants us to think… Where, in Europe, it’s less likely that their food and wine grape supplies have become as compromised as ours. Right away, this makes them very appealing to me.

There’s another revolution that’s begun about our food supplies and wine grapes, and this time it’s being waged via social media awareness. Just as Obama was elected by blindsiding the stodgy “this is how it’s done” mindset, having open access to on-line information, important points are being made. Our news is no longer delivered by US news outlets, which are completely owned by the Big 6. They won’t tell you about GMO foods, nor will they tell us about toxic pesticides, chemical fertilizers, antibiotics, or artificial hormones, but they’ve taken over our food supplies… some of these things are happening to our wine grapes. These news outlets are trying to divert our attention to tragedies (for those who find tragedies hard to look away from); versus telling us hard facts about the dangers of our food supplies, which are being poisoned by big business.

Social media is where we are finding the truths, being delivered by our trusted friends.

My way of thinking has its origins from my Great Depression grandparents, who farmed organically… They delivered food to us of purely great quality. In the time of my youth, most foods weren’t destroyed with the spraying of hazardous, chemical pesticides. The foods that were offered were grown in large numbers, but at least they weren’t poisoned, before we got them. The Bush administration opened the door to a firestorm of poisons. From Earth Justice:

Methyl iodide was approved for use as a pesticide in the waning days of the Bush administration [2007] — over the objection of more than 50 eminent scientists, among them six Nobel Laureates in Chemistry.

And so, to taste organic wines was not only a treat, it was a privilege. Bring on the small company wines, and you’ll bring on the purest of heart, mind, and flavor.

Véronique is the first importer of organic wines into the United States. How this came about is a great story…

Her grandfather was a professor of medicine. In 1972, at the age of 72, he converted the family property to organic farming. The family has owned this property since the French Revolution, as most family properties in France are handed down through the generations.

From an interview with Pesticide Action Network:, when asked “What led you to take an interest in organic wine?”

Véronique …my love for my family, my ancestor’s land, my passionate interest in health/wholeness and the fact that I discovered that my grandfather’s organic wines were the only wines that I could drink without feeling indescribably unwell, headachy, etc. So to backtrack, La Bousquette has been in my family since the French Revolution 1789.

Today, Véronique is also the owner of Eco Wine. Most important to this process… pay attention to the prices. You can’t afford to turn down any of these wines.