How about you, girlfriend? Are you into wine, too? 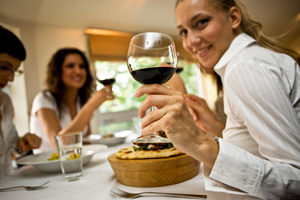 Ah, the use of the word “girlfriend.” How about you, girlfriend? Are you into wine, too? is easy to now ask.

This has the potential to put some guys on edge, I just realized. A gentleman on Facebook recently wanted to know when “girlfriend” had become main stream for women. This person is a perfect gentleman in all ways, so I can see him asking the question… “Like, when did it happen?”

Well, I can’t blame him. For years we went from not wanting to be called “girls” to wanting to be called “women.” And, don’t even try that “ladies” thing on us. That’s the kiss of death, man. Honestly, I’d say — but remember, it’s internally a womano-y-womano thing — it’s since we’ve now found a fun voice.

Think about it… and I even did this in the 60s with certain guys… “How’s it goin, man?”  Well, there you are; men easily calling each other “man” for a very long time…

And, that’s what it is… We’re a step behind catching up in the business world; but, we’re getting there, too.

Hell, we just got the right to vote with the Nineteenth Amendment in 1920… Nearly 100 years later, we can now be professional girl friends.

WIKI: (Amendment XIX –  to the United States Constitution prohibits any United States citizen from being denied the right to vote on the basis of sex. It was ratified on August 18, 1920.)

We then got ourselves into civic clubs in the 1980s, that had been here-to-fore denying women access… Membership discrimination in California social clubs

Like Rotary, for instance, in the early 1980s… I was happy to be one of the first women to sit on committees, and then to be the first woman on my club’s board of directors… This paved the way for other women to join. Today’s women don’t have to prove themselves anymore, like I had to, as being capable of doing what they’re doing. I had one guy push me against the wall so hard I was ready to quit. I went to Dom Tardiff and told him I had had enough. He said, “You can’t quit now. That’s exactly what he wants. He wants to say, ‘See, they can’t take it.'” Yeah, it was that hard.

It’s no longer about feminism, though; it’s now about credentials… And, you’d darn well better believe that we also had to have the credentials to go along with our really hard heads.

So, how about you, girlfriend? Are you into wine, too?