What makes a great one?

It’s important to note that Debbie’s partner is chef and Master Sommelier Chang Liow. Chang has an amazing palate, and his wine list is worth stealing; as they’ve found, at the end of any day at Chinois. I’ve written about their wine list before.

It helps that Debbie Shu was raised in the restaurant business. The Shu sisters grew up in Taiwan, and once they moved to Petaluma, California, their father became the famed chef and restaurateur, who owned and operated the Mandarin Chinese Restaurant on Trancas Street. (Debbie’s father has since passed away, and so this is no longer their family business.) Growing up in this family business produced two (of three) daughters, who now own and operate their own restaurants: Debbie with Chinos Asian Bistro, and her sister Kelly Liow, with Ume Japanese Bistro… both in Windsor, California.  Chang Liow, Kelly’s husband, is a partner in each restaurant. Chang is from the Chinese community in Singapore, adding more diverse flavors to their menus.

When Jose and I first went to Chinois, the restaurant had just opened. People dining there were sparse:

I was really concerned… On one hand, I wanted everyone in town to love the food and support Chinois, as we did, so the restaurant would stay around forever. On the other hand, I didn’t want it to become so popular that we couldn’t get in… 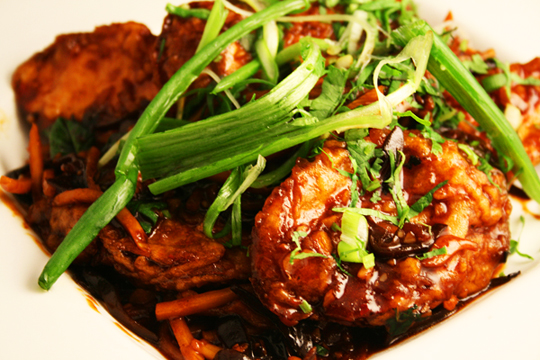 The proof of authenticity is in all of the above… But, I have one more thing to add to that. I’m “the” ultimate finickie food. I’m worse than Sally, in when Harry Met Sally… When I look at any menu, I’m looking for the ONE thing I can eat. There’s usually ONE thing, only… not lots of options. So, I can mostly go into any restaurant and have a meal.  When I went into Chinois for the first time, I actually had to sit there for a long time, in order to make a decision. Her menu is what I had been cooking my kids as I raised them.

My sister Merry had given Jose and me a wok as a wedding gift. Once I got the wok, that’s when I began to run…

Don’t mistake it… Chinois Asian Bistro is NOT a Chinese restaurant. It’s fusion cooking from all over the Pan Asian regions, all coming together, just as I had been doing for years. At last, I could eat as I cooked, without the bother. Someone could finally take care of me, when it came time for me to eat, when I didn’t feel like cooking… You know those days… And, Chinois is my comfort and sustenance go-to.

When I asked Debbie what her philosophy is with this business, she had to think about it… It’s so deeply ingrained as “what I’ve always done,” that it took her a bit of coaching. Then, it came out… “I wanted to create and share the comfort foods that I grew up with… foods that come from all over the Asian world, not just one regional cuisine.”

After graduating from San Francisco State University with a bachelors degree, Debbie decided to go to the California Culinary Academy (CCA), an affiliate of Le Cordon Bleu College of Culinary Arts in San Francisco. She graduated from their two-year, associates’ degree program, receiving intensive studies in all of the culinary arts. Debbie notes that it was very scientific and thorough, and gave her the base and confidence she needed to open her own restaurant, with her brother-in-law Chang Liow. Chang’s background is that he graduated from U.C Berkeley, with a degree in finance. Together, they’ve created a perfect scenario for their successful business. Chang has also added to the menu’s recipes, from his Asian background, besides his Master Sommelier wine recommendations. The end result is the kind of food that takes me back to my comfort zone; as well as pleasing the most discerning palates… As evidenced by their continuing award certificates.