For some, here lies The Promised Land

Let’s get down and dirty with how rare the wines coming from the Green Valley appellation really are:

REVIEW: Green Valley comprises only one percent of Sonoma County… And only 25 percent of Russian River Valley. 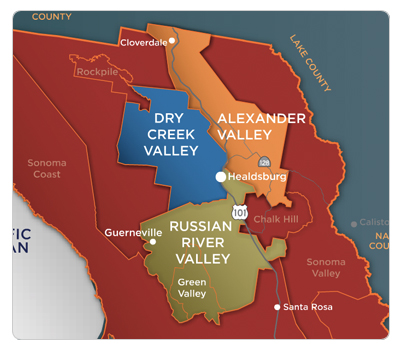 [This map is borrowed from the Wine Road Website. Visit them at wineroad.com for many more details about Northern Sonoma County.]

Green Valley is snugly tucked into the southwestern corner of Russian River Valley, and is The Promised Land for exceptional, cool weather Pinot Noir. Its close proximity to the Pacific Ocean makes it one of the coolest appellations within Sonoma County. The climate in the Green Valley is cooler than other parts of the Russian River Valley, favoring the cultivation of cool climate varieties like Pinot Noir and Chardonnay.

Green Valley roots are rich with history, but who arrived first is rarely discussed or found as an interesting story. Still, it’s very important to note, as its name suggests… Russian River Valley…

Who arrived and cultivated it? The first ancient settlers were the Central Pomo people, who came into the area 8,000 years ago. Then, the modern day (and wine-centric) settlers came from Russia, as it turns out; not the Italians, nor the Spanish, but the Russians… hence the name. For my 20+ years of living here, as obvious as that should  have been to me,… like so many others before me… I pretty much missed the entire point. It wasn’t until I began to research its complete origins, starting with its inhabitants, after the tectonic plates had shifted and settled into what we know today as California’s West Coast, that I realized… it’s about the Pomo Indians, first and foremost; and then the Russians.

You have to dig deep to find any history written about the Russians being the first to plant wine grapes in Sonoma County. Better known are the histories of the Italians, Spanish, and French immigrants; because they came, they saw, and they stayed, during that idealized Gold Rush time… But it was the Russians who made that very first viticultural mark in Russian River Valley, as its name suggests, and then returned to Russia… just missing the gold rush, as it turns out. (Guess who’s sorry now?)

Science Under Sail: Russia’s Great Voyages to America 1728-1867 tells the story of early Russian maritime exploration in the North Pacific. More than two hundred years ago, Russian naturalists, ethnographers, astronomers, cartographers, geographers and artists first described the west coast of America to the rest of the world. To this day, much of our knowledge about the peoples and places of the North Pacific Ocean is based on those Russian reports, artworks and maps. The exhibit showcases a scale model of Bering’s ship and the brilliant, colorful maps made during that expedition’s 7000-mile trek across Siberia, along with portraits of Native Californians and Alaskans, artifacts, and original watercolors of botanical and animal species.

A Russian eastward expansion took on a new dimension, in the seventeenth and eighteenth centuries. As Europeans expanded westward, the Russians expanded eastward.  As English colonists first settled along the Atlantic seaboard, Russian explorers, trappers, and settlers pushed into Siberia, and then reached the Pacific Ocean by 1639. By the mid-seventeenth century self employed, contract entrepreneurs sailed through the Bering Strait, and discovered a sea route from the Arctic to the Pacific. This became of great interest to hunters and fur traders. By the early 1800s, Russian entrepreneurs annually exported an average of 62,000 fur pelts from North America, roughly worth about $133,200. As with all history, that was a large sum of money at the time.

Once the fur traders came, they also needed provisions for not only themselves, but also for settlers in Alaska. Initially, they explored as far as south Fort Ross for their arable land. This was an area where the Native American Pomo tribe summered. It was a great place to become cool from the sweltering inland heat of the summer months. Unfortunately for the Russians, they didn’t know about more favorable, warmer climates inland… And, I’m thinking that the Pomos didn’t share that info, just as my grandfather who wouldn’t allow us to even speak during our wild blueberry picking days in Wales, Maine.

In 1836, the Russians allowed Yegor Leontievich Chernykh, a Moscow trained agronomist, to move a bit south. Chernykh settled in Green Valley, and established a farm along Purrington Creek, between what are today the towns of Occidental and Graton. Chernykh erected barracks and five other structures, growing vegetables, fruit, wheat, and other grains. Chernykh also developed a large vineyard, introducing wine grapes Sonoma County. Interestingly, Yegor Chernykh became known as Don Jorge… since the region already had a Mexican population.

When the Russians pulled out in 1841 – just missing the gold rush – everyone, including Yegor, returned to their motherland, ending the pioneering Russian, viticultural history, as we now know it.

And the rest until today became European history…  Meanwhile, it’s important to note “who’s on first.”