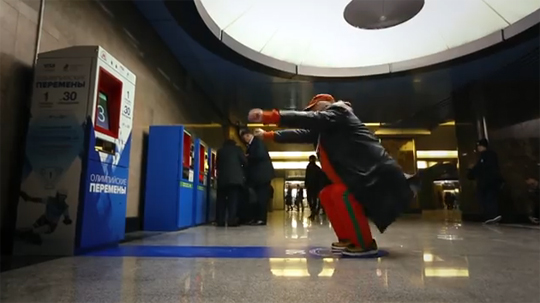 This is one of the best PR moves I have ever seen in my entire life, and I’ve been around the block a few times. As a wine PR person, I’m really inspired  by this one and saving it for PR crisis management.

The beleaguered Russians have been having a bad time with their image, since they’re so homophobic. It’s completely damaging to them, and has brought world attention to the fact that they can’t yet open up their hearts to the diversity of mankind.  It’s no secret that it exists in the world. And, unlike the US, where we’re finally moving on regardless of the trilobites that still exist, many of us have finally admitted that we all know people who are gay. But, we not only know them, we also love them. Love allows for diversity to set in.

As Jose has said so many times to me privately, who would deliberately choose such a tough path? I believe that people choose their paths before they arrive here. That would mean that anyone taking this assignment has the largest heart of all, and has come to teach us tolerance through their own sufferings. (Read some of Michael Newton, Ph.D.’s studies, and you’ll know where I’m coming from on this attitude.)

Meanwhile, the hearts of Russians haven’t had time to catch up with their heads, and so they’re wanting everyone to obey the czar… still.

Jose just showed this video to me, and I realized that some PR maven just thought up the unthinkable… to deflect with genuflects….

Brilliant, but still leaves them behind the times with the issue of the LGBG community. Still on the level of health, I applaud them.

For those who live in Moscow, their morning commute includes a brief fitness session to get a free ride on their trains… They’re promoting the upcoming 2014 Sochi Winter Olympics, and have added these outstanding new machines… They’re allowing passengers who can accomplish 30 squats to get a free train ticket.

Well, that’s taken the focus off their homophobia, for the time being.

Meanwhile, I’d love to see these machines installed in all US subway stations. Imagine the health possibilities and benefits…. With a health emphasis on the FIT.