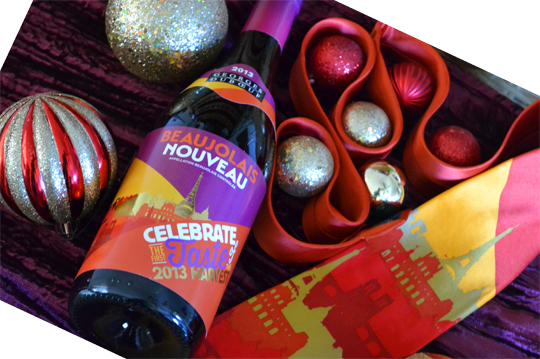 Beaujolais Nouveau Day is celebrated in France on the third Thursday in November with fireworks, music, and festivals.

Hi, Jo, Be among the first to taste the new 2013 Georges Duboeuf Beaujolais Nouveau, the first wine of the harvest! Available nationwide one stroke after midnight on November 21st, Nouveau will be uncorked at parties and celebrations across the U.S. (suggested retail price of $9.99).

And, I wish I could be in Paris, where it’s really happening today! Alas, I cannot; however, I got the next best thing. Franck Duboeuf, son of famed Georges Duboeuf, and I had a wonderful phone conversation. [Jose was also on the line, for any added questions that I might not have considered).

WIKI: Beaujolais nouveau (French pronunciation: ​[bo.ʒɔ.lɛ nu.vo]) is a red wine made from Gamay grapes produced in the Beaujolais region of France. It is the most popular vin de primeur, fermented for just a few weeks before being released for sale on the third Thursday of November. This “Beaujolais Nouveau Day” used to see heavy marketing, with races to get the first bottles to different markets around the globe. The current release practice is to ship the wine ahead of the third Thursday of November, and release it to the local markets at 12:01 am local time.

Yesterday, mon vin le plus célèbre est arrivé… along with a celebratory necktie – or a thin scarf, depending  on how you view it. How did I get so lucky as to have a bottle of the 2014 vintage of Beaujolais Nouveau arrive at my door by FedEx? Thanks, Karma…. Hard work is at the root of all good.

I’m loving it. I’m needing to wear a thin scarf with the Eiffel Tower on it for a while… This might just be one channel to my French forefathers from the Bernier and Ouellette families.

From the Beaujolais Nouveau Day.com Website: Under French law, the wine is released at 12:01 a.m., just weeks after the wine’s grapes have been harvested. Parties are held throughout the country and further afield to celebrate the first wine of the season.

The conversation was great. Franck Duboeuf, son of Georges Duboeuf) recently called me from France. We  talked about his immediate history, growing up with a father who was so ingrained and invested in the wine business.  It’s important to note, for anyone new to the wine world, France’s history is pretty much carved in stone at this point. With as much “that’s so yesterday” as France has with growing wine grapes, to have had his father do something way “outside of the box” is almost unheard of, mostly unthinkable, and very daring… that innovative nature that shapes change. And yet, his father Georges Duboeuf went there in a delightfully positive way… with a big… 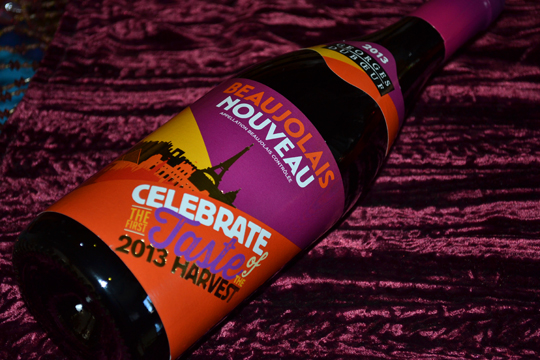 “What if I create a wine release that’s going to be most phenomenal?

“It should be a red wine, soft and young… supple in body with a spirit of joie de vivre. A cheek with a pleasant, rosy glow greets you… You know you’ve arrived with the wine. . It needs to be one that owns its own day, forever and ever more. A celebration of the most festive kind…”

That’s a tall order, and Georges Duboeuf fulfilled the dream.

[Only the best will still do.]

There were 40,000 pickers during five or six weeks.

[What an interesting influx that must be to see in the vineyards. I see it all here, but what I see is radically, culturally different. It feels more romantic to me, because time moves more slowly there… Slowing down time seems to allows for charm to develop. It’s a French thing.]

While Franck’s father was raised on a small farm, where his family owned a few acres of Chardonnay vines, he grew up in an evolved business and growing up in a vineyard versus the small farm of his father’s youth.

[Imagine growing up in a vineyard… It’s s really a grape farm, for those from other neighborhoods, if you’re wanting to “get it.” All of the elements and sensitivities of  nature are there for you. I can’t stop watching the movie “A Good Year.” The film has a very intriguing perspective, having been shot either in the early morning, or just at dusk, for the many interludes presented. It’s a great film, and that’s what I’d imagine for Franck and his sister Fabienne.]

“It was a wonderful childhood, walking, discovering, secrets in the vines. Helping with harvest, because that’s just what everyone does… But,  not my favorite work,” he admitted, almost chucklingly to himself. His life evolved as his father’s vocation evolved into a négociant. No longer vinifying wine, the focus switched into checking samples every day during fermentation… tasting the future. It would be at this point that his father… realizing the potential for how the next vintage will taste, and how it should evolve based on foreknowledge, came up with his epiphany. “What if?”

Also, there was another side to that cleverness… the Laws of France… Make a law, government, and there will always be those who will take it right to the very edge… testing the balance between tame and wild, and then experiencing the dream. Georges Duboeuf took it to the limit, and Beaujolais Nouveau Day was born.

WIKI: Beaujolais had always made a vin de l’année to celebrate the end of the harvest, but until WWII it was only for local consumption. In fact, once the Beaujolais AOC was established in 1937, AOC rules meant that Beaujolais wine could only be officially sold after 15 December in the year of harvest.[2] These rules were relaxed on 13 November 1951,[2] and the Union Interprofessionnelle des Vins du Beaujolais (UIVB) formally set 15 November as the release date for what would henceforth be known as Beaujolais nouveau.

What was this year’s harvest like?  “The weather in 2013 is going to bring forth a very good vintage. It was a late harvest, on September 23. This was two to three weeks later than in the past five years. The ripeness, the balance, sugar, acidity, all of the processes went well. It’s a beautiful, deep color with intense aromas and a large array of red fruit and black fruit. It’s well balanced, it’s fresh, a good quality… We’re very pleased with the vintage. I compare it to 2011. We just have a hint of tannin at the back end which will let it have a bit of maturity.”

The process has winemakers worldwide curious, about the evolved methodology of wanting to perfect the most exquisite of Beaujolais Nouveaux. According to Franck, “Each year a few winemakers travel to Beaujolais, France, to absorb what they can. The region has become extremely well experienced with the uniqueness of the Gamay grape and its processes. Beaujolais,” he continues, “Is a local tradition and the first wine we enjoy after hard work.  The Gamay grape shows so beautifully just  25 days after harvest, which is why my father chose this grape variety.”

“Your wine is your image,” was his final thought.

If a picture is worth a thousand words, let these two items ignite your imagination, and perhaps your palate. I know I’m already drooling.