Winemakers worst handicap and those who detest it 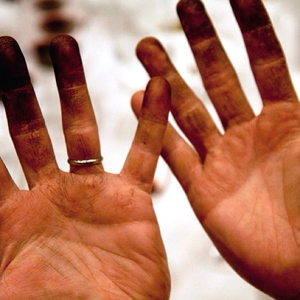 Being a champion of the underdog has always been a calling. It stems from being one myself, and it was Life Lesson # 2.

Life Lesson # 1 comes at the age of two, when we don’t get our own way. We can either get over it and learn that that behavior isn’t really positive, or we can pitch a fit to get unwanted attention. That’s the ole tantrum routine. Without emotionally intelligent parents, we may not move through this difficult challenge. These poor souls then use the false inference dodge to get their own way… We’ve got a classic example in my family, to this day; screaming and yelling with info that has nothing to do with the real issue. Tricky, but she never really gets a satisfactory resolution, even as a senior citizen.

On Facebook, Wilfred Wong of BevMo and wine judge extraordinaire in so many wine competitions, just posted this image of winemaker hands on Facebook. He wrote the following:

Hands of a winemaker. This is the way it is; dirt farmers who bring their wines from vine to bottle go through life with hands like these. May 6, 2011, Temecula, CA[)] #getyourhandsdirty #farmers #viticulturists #winemakers

Our family has a winemaker. Heath Hoffman is my son-in-law, married to our daughter Melanie. When I saw this picture, it brought back a very interesting memory for me. I’m not going to name the white table cloth restaurant in San Francisco, where this memory happened. If the owner were to read the rest of this story, he’d be horrified; and, I’m not here to name names in this instance, just to point out the behavior that I found very intriguing.

After a long, hard harvest, we decided to treat our daughter and Heath to dinner in San Francisco.

Honestly, if this same scenario had happened in Sonoma County, this probably wouldn’t have happened, because it’s so common place.

Back to San Francisco…

Our female wait server approached our table, to ask if we wanted beverages… You know the drill. We all ordered what we wanted. Then she came back for the appetizer order. As she moved around our table in the next process of us ordering food, I picked up that she was avoiding Heath like he had the plague. I quietly pondered what would be the cause, but it didn’t take me very long to figure it out. Heath was dressed appropriately, but his winemaker hands weren’t up to her standards… And, she had quickly passed inappropriate judgment.

“You’d think they’d be more sophisticated in San Francisco, being so close to wine country,” I thought.

Once she brought our appetizers, within  her earshot, I asked him, “So… how was harvest for you this year, Heath?”

A 180 degree spin instantaneously appeared before my very eyes, and Heath was the underdog no more. He became the star.

How funny we all are…