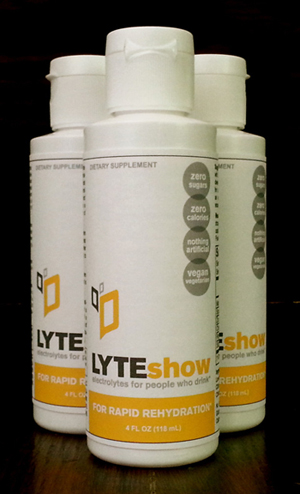 LYTEshow replaces electrolytes after enjoying wine… And you deserve to know about it.

Electrolytes… From Discovering Health: “Electrolyte is a “medical/scientific” term for salts, specifically ions. The term electrolyte means that this ion is electrically-charged and moves to either a negative (cathode) or positive (anode) electrode:”

Continuing…. Electrolytes are important because they are what your cells (especially nerve, heart, muscle) use to maintain voltages across their cell membranes and to carry electrical impulses (nerve impulses, muscle contractions) across themselves and to other cells. Your kidneys work to keep the electrolyte concentrations in your blood constant despite changes in your body. For example, when you exercise heavily, you lose electrolytes in your sweat, particularly sodium and potassium. These electrolytes must be replaced to keep the electrolyte concentrations of your body fluids constant. So, many sports drinks have sodium chloride or potassium chloride added to them. They also have sugar and flavorings to provide your body with extra energy and to make the drink taste better.

If athletes understand that it’s important to replace electrolytes to keep the concentrations of their body fluids constant, then it’s time for wine drinkers to also consider replacing our electrolytes, too. However, I don’t know about you, but I – for one – am not going to be drinking any sports drinks to get my electrolytes back in balance. But, I’m really liking LYTEshow.

Because I’ve always been concerned about my health (I can thank my grandparents for this) I was queried once before about trying drinkwel, a multivitamin (vegetarian) supplement. It’s made for supporting the health of a wine drinker. So… no surprise that I was queried once more. I’m game for anything that supports my health, while I’m enjoying life. LYTEshow is a great support system for my body… perhaps yours, too.

Alcohol is a diuretic and depletes the body of fluids and electrolytes. Added to the directed amount of water, LYTEshow creates an isotonic beverage that rapidly replaces valuable electrolytes and fluids. In fact, LYTEshow’s patent-pending mineral base has been clinically tested and has been shown to be a significantly more efficient form of hydration than water alone. Using wildfire firefighters as a study group, medical researchers found that the firefighters who added our mineral base to water drank far less water to achieve the same hydration as those who drank just plain water.

The fluid part of our body contains a combination of water and dilute solutions of electrolytes. Electrolytes perform a number of critical functions in the body including: 1) powering water absorption; 2) regulating fluid balance within the cells; and 3) assisting with proper brain function, energy conversion and metabolism. An imbalance or inadequacy of these elements can result in impaired cognition, muscle function, and nerve transmission. Adding LYTEshow to water rehydrates the body and replaces critical electrolytes lost from drinking alcohol or sweating so your body can return to its natural balance.

I recommend LYTEshow, because I understand the importance of re-hydration versus dehydration. If I can live this life as a healthy individual, my quality of life is greatly improved. LYTEshow is one of my necessary components. God gave a sister to me whose whole life has been devoted to nutrition. One of my sisters became an RN in the 1970s. After spending years helping people to die in cancer and cardiac pre and post operative care, she decided to that she’d rather help people to live.

She also had to call in a family criminal defense attorney. She had begun to tell patients that the drugs doctors were prescribing (for recovery) had possible side effects. Advertising now addresses this, but back then, it wasn’t ever mentioned. Sadly (and now thankfully) enough law suits have made the drug companies more accountable.

As a medical professional, my sister was very concerned for her patients, including knowing what the prescribed drugs were going to be possibly doing to her patients in the long run… More than the doctors were. My sister would tell patients that nutritional supplements could be safer. A group of doctors went on the war path.  My sister got herself out of the business of helping people to die, and reversed her burn out. She reeducated herself toward helping people to live, with nutritional supplements.

On a personal success note: She completely reversed my chronic acid reflux (for years), when I was willing to get off Prilosec and do what she recommended. I had been drinking too much cranberry juice, not realizing what I was doing to my esophageal sphincter. My sister helped me to repair it. Good nutrition heals us… period.

I’ve got the Website all over this post, if you – too – believe that your body deserves the best nutrition… Go for it…