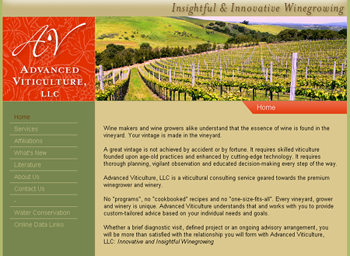 I didn’t know much about the Santa Cruz Mountains, until I interviewed Mark Greenspan.

If you read Wine Business Monthly, you’re familiar with Mark’s writings. If you don’t read WBM, Mark has two decades of viticultural scientific research and field experience. He’s provided viticultural leadership to winery estate vineyards and to winery grape suppliers, while managing one of the largest portfolios of viticultural research projects in the private industry sector. Mark has worked side-by-side with leading viticulturists, vineyard managers, winemakers, and agricultural technologists, while keeping closely in touch with academic research.

Mark’s eclectic background includes a Masters degree in Horticulture/Viticulture and a Doctorate in Agricultural Engineering, both from the University of California, Davis. He is one of very few private practitioners who have been elected as an honorary member of Gamma Sigma Delta, the Agricultural Honor Society.

He’s regarded as one of the world’s leading experts in wine grape irrigation and has written scientific and trade journal articles on the subject. In addition to his command of grapevine irrigation practices, he has extensive experience in vineyard mineral nutrition, crop load management, vineyard uniformity, grape maturation, weather, climate, and viticultural technologies.

I was honored to have some of his valuable time to learn about the Santa Cruz Mountains. My intereview with Mark Greenspan follows:

[Q] Santa Cruz Mountains is not like other wine regions. Why?

[A] It doesn’t have a high density of vineyards and wineries, which can either market separately or market together. And in the Santa Cruz Mountains, they don’t have the density. They’re spread out and are few and far between. There’s power in numbers, and if they break it down, there’s only going to be a handful of members in each area. Some vineyards, for instance, have two or three different soils within just one vineyard on one property. There’s a tremendous amount of variability. Different kinds of soils: sand stone, to clay, to loamy soils. There’s a tremendous amount of variability within one property. I always ask why wineries focus on soils so much. I’m more of a climate oriented AVA and terroir believer. I believe climate has much more affect on differences for a region.

[Q] Santa Cruz Mountains is a rather large AVA. How does this work in the AVA scheme of things?

[A] That’s not a bad thing or a good thing. It’s defined partially by elevations, based on which side of the mountain a vineyard is on. That’s how they drew the boundaries. West side, cooler side, it’s a higher/lower (?) elevation than the other side, the warmer side (I think). They adjusted it so that it’s roughly at that level where you could grow grapes, where it’s not too cold (it’s too cold near the ocean). And as you go up the mountain it gets a little warmer and stays a little warmer at night. And, on the inland, eastern side of the mountain, it’s warmer, and they have elevation defined, because as you get to the valley, it’s a lot warmer, and it takes a lot of the characteristics out of the AVA, which is generally a cooler climate region as compared to other AVA regions in the state.

[A] There are really two distinct climate sides of the mountain: there’s the cooler Pinot Noir side, and there’s the warmer Cabernet side. Obviously there are other varieties that go along with those sides, but there are two distinct climatologies. One is on the eastern side, and has less direct ocean influences, but is more influenced by the San Francisco Bay. This means the air warms more before it gets there and stays warmer. Plus there’s the simple fact that there are two aspects: one is facing east, and one’s facing west.

[Q] Can you explain this really unique region?

[A] The only other region that I can think of that’s similar is the Sonoma Coast, only because it’s a large AVA also and runs along the Pacific Ocean. It really doesn’t have the same elevation, though, but it’s definitely different.

[Q] Tell me about the Santa Cruz Mountains.

[A] The highest point in the Santa Cruz Mountain range is the Loma Prieta Peak at 3,786 feet. The mountains are largely the result of a compressive uplift, caused by a leftward bend of the San Andreas Fault’s geophysical and climatic factors. The appellation encompasses the Santa Cruz Mountain range, from Half Moon Bay in the north, to Mount Madonna in the south. The east and west boundaries are defined by elevation, extending down to 800 feet in the east and 400 feet in the west. This makes it a very unique AVA with this amount of elevation.

The only other AVA I can think of that’s comparable is up in Mendocino in the Yorkville Highlands [between 1,000 and 2,200 feet in elevation], which is defined by elevation also, but doesn’t have as much coastal influences, either.

[Q] What other factors make this region so unique?

[A] I think it’s safe to say that the Santa Cruz Mountain range has two things going for it that define it: one is proximity to the ocean and the second is elevation. It’s really hard to think of another appellation that has those two in such dramatic fashion.

We may not have that appellation anywhere else in the world that has these features.

[Q] There’s talk about regions within the Santa Cruz Mountains. Have you heard about this movement?

[A] No, I haven’t heard about this. Santa Cruz Mountains is probably not nearly as well known as it should be. It needs a good storyteller to get the word out, but not dilute its potential by fragmenting it before the name is instantly synonymous with wine, first. It’s important to keep it as a unified AVA for economic purposes.