King Estate ~ An Oregon Winery worth visiting, either in person or by enjoying their wines 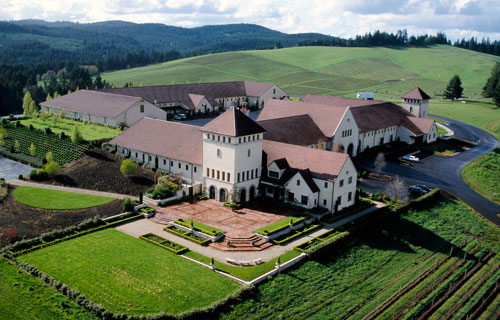 [Images of King Estate are from Nicolette Renee of Simply Colette.]

The advantage of having someone who “knows someone” in any location around the globe always advances the quality of your visit. In this case, it’s my Oak Knoll boys in Oregon… Oak Knoll Winery was the first winery in Willamette Valley’s Washington County; the history is long and intriguing. And, President Greg Lint is always willing to share his wine country when we visit.

Also, setting up the annual Oregon Pinot Gris Symposium for Oak Knoll each June is bringing many resources right to my doorstep, where I’m now getting to know many key players. One of these key vintners is King Estate Winery. King Estate is located southwest of Eugene, Oregon, in the central western part of the state… 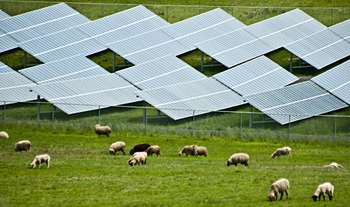 [Image of solar power panels and sheep comes from the BPA.gov Website.]
In an energy sustainable effort, and as an industry leaders, King Estate Winery teamed up with SolarCity, Lane Electric Co-op, and Advanced Energy Systems to Install the largest solar powered system at a winery in the Pacific Northwest. Their commitment to making great wine, as well as their commitment to the environment is greatly appreciated on my end. Any effort at sustainability tells me that King family is one of a higher consciousness.

What I also really appreciate, like anyone else writing about wine, is their winemaking effort. Director of winemaking Jeff Kandarian is really smart, naturally energetic, and a very articulate man. When King Estate came to the first symposium, it was Jeff’s comments to the featured speakers that caught Greg Lint and my eyes and ears. Both of us knew that he was a perfect candidate to be a guest speaker for the next and second symposium… And, he delivered. His topic was: Producing Oregon Pinot Gris of Exceptional Quality Through Impeccable Winemaking Practices and Judicious Blending

Jeff Kandarian joined King Estate in 2008, coming from the southern Oregon region, where he was the winemaker for Del Rio Vineyards and Winery. He was born and raised in the San Joaquin Valley of California, earned a BS in Enology (with a minor in Chemistry) at Cal State Fresno. He’s worked at wineries large and small in Paso Robles, as well as Justin, Meridian, Eberle, and Shandon Valley Partners. Let’s just say, he’s really well rounded.

They’re Oregon’s largest producer of Pinot Gris, with 470 acres under vine, Pinot Gris takes up 300 of those acres… They also produce about half as many cases of Pinot Noir (160 acres), and also grow a bit of Gewurztraminer, Chardonnay, Muscat, and Riesling (totaling 10 more acres). This is clearly a Pinot Gris house… period. King Estate ships 175,000 cases per year, which is a small number compared to a state like California; but by Oregon’s standards, they’re the state’s leading producer.

During a story that I wrote entitled, “Oregon Winemakers define their own Pinot Gris style to Paul Gregutt,” Jeff Kandarian had this to say about what he believes makes outstanding Oregon Pinot Gris:

King Estate is now in its 22nd year of Oregon winemaking, producing Pinot Noir, Pinot Gris and limited amounts of Chardonnay. From their site:

The beautiful estate of 1,033 acres is certified organic and includes 470 acres of organic vineyards, as well as 30 acres of fruits, vegetables, and flowers. The Estate is crowned by the charming, European-style winery, where the winemaking process is also certified organic.

They also have a restaurant and wine bar, which features wine tasting, winery tours, and fine dining. Their menu incorporates estate and locally grown organic ingredients, which – of course – complement their King Estate wines.

All of this makes me want to get into my car and head north, again…