Embarking on my own Greek (Wine) Odyssey

En Oeno Alethea ~ In wine, there is truth…

I’m thinking that the wine will negate any hardships…

This blog posting has been inspired by Eklektikon, a Greek import company, that sent wine to me late last year, so that I could begin to learn more about their wines. Of course, they’re hoping that I’ll share what I’m learning along the way, and I’ve had to clear the decks for what I wanted to do with these wines. One can’t simply learn about an ancient wine region over night; I’ve learned that with each new task I’ve put before myself with wine.

I spent five years in Sonoma County learning about wine in general and this specific region, before I was even ready to really learn about Napa. Napa came with my job at Mondavi. I then segued into two years of learning about the Sierras. My most fascinating time was a couple of years working with Enoforum Wines, a Portuguese company that also brought me to Portugal… And now, Greece is one of my two new destinations (Chile is the other).

This is my Odyssey into the world of Greek wines, one that will allow me to learn more about its culture, with wine playing the major role; although, the architecture of Greece is probably as fascinating to me. I feel it’s proper to start with Dionysus, the Greek god of wine. Mythology has always played a solid role in my own life, having learned early on about Dionysus… Long before I knew much about wine, I was studying the ancient gods and the roles they played in people’s thought processes during those ancient times.

I turned to my own wine library (versus the Internet) for a refresher course. Who better to help but Richard P. Vine. While at Mondavi, I picked up his Wine Appreciation, A Comprehensive User’s Guide to the World’s Wines and Vineyards. Chapter 4, the History of Wine: I knew that he’d hold the answers I was looking for; sure enough.

According to Dr. Vine, “The grapevine has existed since the infancy of plant life on Earth. Fossils found in France and Germany reveal that a vigorous plant, which bears some resemblance to the ramblings European Ampelopsis, existed some 500 million years ago. This was the prolific ancestor of the vine that now bears wine.” (p. 135-139)

The cradle of viticulture is being debated as to whether or not it happened in Mesopotamia or perhaps even in Georgia.

In Richard Vine’s Wine Appreciation book, written in 1988, he chronicles the journey from either starting in Egypt or Mesopotamia, expanding into Egypt with the Phoenicians, then bringing both grape vines and wine into Greece as trade items. They traversed the eastern portion of the Mediterranean Sea from Egypt to Greece… And, Dionysus was obviously there to greet them, in the minds of the great poets of the time.

Dionysus, the wine god and son of the Greek paternal deity, Zeus, was an extremely important expression of Hellenic culture. First portrayed as a beardless youth… Dionysus evolved into a strong young man with a full beard… as well as various other forms. He is also frequently depicted holding a pruning knife; a clear indication of the importance of the Greeks placed on disciplining the vine-a viticultural practice known perhaps even in prehistoric times. the image of Dionysus as a fat, inebriated delinquent appeared mostly in pagan Rome, where he was renamed Bacchus. (p. 137) 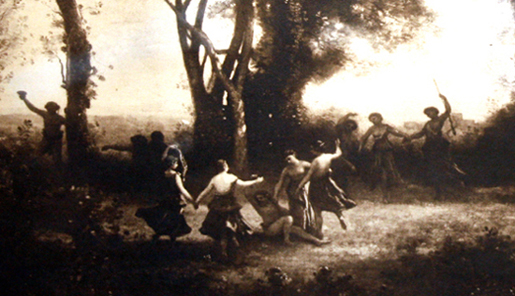 Before I moved to California, I saw this sepia in my mother’s living room. It had just been framed, and was sitting in front of a chair on the floor. When I saw it, I said to my mother, “Wow, I really like that.” All she said was, “Do you?” to which I simply answered, “yeah.” That Christmas, it was my gift, and one of the most favorite things that my mother ever gave to me. At the time, I had no idea what it was.

I’ve since learned that this is called “Morning – Dance of the Nymphs,” painted by Jean-Baptiste-Camille Corot. I happened to find a copy of it in a book I own, written by Thomas Bulfinch called, Myths of Greece and Rome. How fitting! 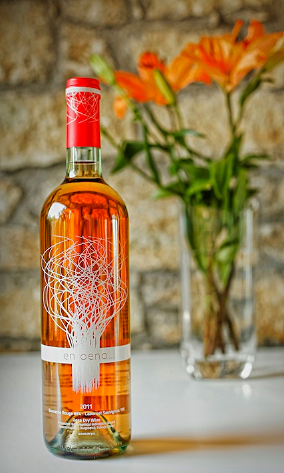 “En Oeno. . .” references Ancient Greek proverb “En Oeno Alethea,” which means “In wine, there is truth.” Since ancient times, Greek wine consumption has led to the revelation of secret verities locked mysteriously inside one’s self.

This wine is probably one of the most unusual I’ve ever tasted. I was definitely experiencing a different combination, and found it to be very intriguing:

This wine had a really lively, aromatic nose, and made me feel like I was walking though my summer flower garden. The bright acidity on my palate was refreshingly clean; and the lovely, juicy peach finish made me feel like I had just eaten a Georgian peach pie. (This is a dry wine, so don’t let my pie reference throw you off.)

This wine would be exceptional as an aperitif or served with fish or chicken dishes:

And so… this first step of my Odyssey proved to be true to form, with the  “… long series of wanderings or adventures, especially when filled with notable experiences, hardships, etc.” after trying to find my work’s artist…