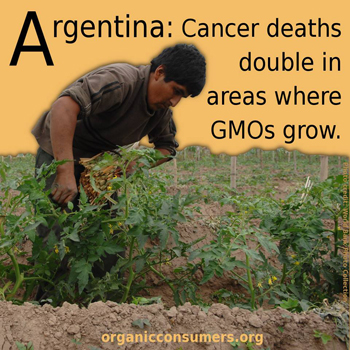 “Livestock in the UK and around the world have been fed GMO for over two decades, since the USDA authorized the commercial sale of GMO soy and corn to feed not only animals, but human beings in 1996. Much of the meat raised on these GMO crop are sent overseas, to countries like the UK, elsewhere in Europe, and even to cattle-abundant nations like Australia. This most recent study proves that a more sober examination of the long term effects of GMO on our environment and health should be demanded of corporations like Monsanto, even as other evidence mounts that GMO crops are unhealthy, especially considering that nations trying to remove GMO from their food supply are still being devastated by its ill-effects.”

Cancer Deaths Double in Argentina’s GMO Agribusiness Areas: A report by the Ministry of Health in Córdoba, Argentina reveals that deaths from cancerous tumours are double the national average in areas where genetically engineered crops are grown and agro-chemicals are used.

This comprehensive report documented five years of information on cancer cases in the province.

(Reuters) – Rats fed a lifetime diet of Monsanto’s genetically modified corn or exposed to its top-selling weedkiller Roundup suffered tumours and multiple organ damage, according to a French study published on Wednesday.

Although the lead researcher’s past record as a critic of the industry may make other experts wary of drawing hasty conclusions, the finding will stoke controversy about the safety of GM crops.

[UPDATE: from Larry Mawby’s comment: “The variety chancellor has existed for a number of years, and has been in use to you might wish to change your note to self to avoid ‘improved chancellor’ wine, rather than chancellor wine. Not that you are likely to run into either….”]

Since this is a wine blog, let’s start with whether or not wine is already genetically modified.

From the Heartland Institute, by H. Sterling Burnett, a senior fellow for the National Center for Policy Analysis (NCPA).

One of the most effective, widely used herbicides in the United States—known as 2, 4-D—has a serious drawback: It devastates grapes. That makes it very difficult to raise grapes in the Midwest, because 2, 4-D is widely used on popular staple food crops including corn and wheat, and it can harm grapes up to two miles away from its point of application.

Scientists, however, report a minor genetic modification of Midwestern grapes can make them resistant to 2, 4-D.

The genetically modified grape, created by researchers at the University of Illinois at Urbana-Champaign, is called Improved Chancellor. In the aftermath of an accidental spill of the pesticide, the United States Department of Agriculture (USDA) found a soil bacterium with a gene that allows it to break down 2, 4-D. Building on this finding, in 2002 Robert Skirvin, a plant biologist at the University of Illinois, secured permission to use the gene and transfer it into the Chancellor grape.

Click on the link above for the full story for pros and cons. An intriguing final statement really caught me eye.

Even such staple crops as potatoes, critical to solving hunger worldwide, are not immune to the “irrational fears and harmful political maneuverings of environmentalists,” Avery said. He predicted Improved Chancellor grapes might face similar objections as researchers attempt to move them from the laboratory and greenhouse to farmers’ fields.

NOTE TO SELF… don’t buy wine made from the Chancellor grape, once it’s produced.

In the 1970s, it was an environmentalist that stated the dumping of water from manufacturers into rivers (like what Bates Mill in Lewiston, Maine… my own home town) had to stop, as it was putting hazardous chemicals into the Androscoggin River… It was not irrational fears, nor was it harmful maneuverings of environmentalists that called that one correctly. If you don’t believe this, simply look to China’s environment today, where the factories in Lewiston, Maine, rather than doing something to modify their hazardous behavior, simply took their plants to China, and have been globe trotting ever since.

From Palate Press, by Erika Szymanski

Dr. Dennis Gray, a professor of developmental biology at the University of Florida and father of the glowing grapevine, speculates that industry and consumer acceptance may be the most difficult part of bringing genetically modified wine grapes to market. Dr. Gray and his research group have successfully modified—“transformed”—both wine and table grape varieties with genes that make them more resistant to problem fungi and pests. Expressing a specific gene from chardonnay in a Thompson Seedless variety, for example, dramatically improves its resistance to fungal diseases like powdery mildew or sour-bunch rot. The group has had success with a variety of Vitis species, including popular vinifera. The work is motivated in part by the goal of profitably growing grapes in Florida, an endeavor historically plagued by unmanageable Pierce’s Disease, but Dr. Gray sees benefits for growers of both wine and table grapes everywhere….

Will the fact that only grape genes are being used make a difference to opponents of genetic modification? Maybe, but it is not likely to pacify everyone. Both the Australian wine industry and the California-based Wine Institute have issued public statements against the use of any genetically modified organisms, which would include Dr. Gray’s cisgenetic vines.

NOTE TO SELF… don’t buy any wine grown and produced from Florida.

From MetroActive, by Tara Treasurefield

WOULD YOU LIKE the wine you drink to glow in the dark? Then go to Florida, where genetic engineers have inserted a fluorescent jellyfish gene into grape plants. The gene lights up the plants and allows researchers to see the results of their experiments. The real purpose of the research is to develop a cure for Pierce’s disease, a vine-withering disease spread by the glassy-winged sharpshooter and other insects and by diseased rootstock. Researchers plan to remove the jellyfish marker gene from the grape plants before they’re marketed. But if some enterprising soul thinks that consumers will buy fluorescent wine, before long it could be available in stores near you.

So, if I drink that wine, and the DNA has been changed to include a jellyfish gene, does that mean that I, too, will glow in the dark? This is all just too much.

Science brought us both being able to see an atom, and then Einstein’s equation E=mc2. This equation helped to create the atomic bomb. Einstein encouraged President Franklin Roosevelt to build an atomic bomb, thinking that the Germans might get there first. From Einstein | American Museum of Natural History: “He came to regret taking even this step. In an interview with Newsweek magazine, he said that ‘had I known that the Germans would not succeed in developing an atomic bomb, I would have done nothing.'”

The list is very extensive, thankfully, and brands are happy to state their non-GMO commitment to us.

This is just the “a’s,” so I suggest you go to this page on the Product search on the Non-GMO Product Website. And, also remember… a health food store continues to be our best friend for healthy living, and avoiding some scientist’s great new idea for inventing how we can grow bigger, better, faster, more disease resistant, when we all know, “It’s not nice to fool Mother Nature.”

As ingredients change in products all the time, the best thing is to check the ingredients list of the products you buy often. Keep a look out for:

UPDATE: Infertility with cattle, along with spontaneous abortions.