Rolling in a rich history: Greece is a museum inside a bottle of wine

I recently received an Email from Anh Phan, the communications manager at Eklektikon LLC, an importer of eclectic Greek wines in the US.

Anh wrote: “I wanted to inform you about our company’s unique approach to wine. Eklektikon is more than just exquisite wine; it is about the embodiment of the best of Greek art, culture and history, appealing to oenophiles on a deep emotional and cultural level. With the shift in interest towards Greek wines, Eklektikon is becoming a unique source of Greek culture in the United States by sharing our expertise and passion for wine. In order to better explain our concept, we have put together a feature article titled ‘A Museum Inside a Wine Bottle.'”

The story talks about the past, the present, and the company’s philosophies about this a 6,500-year-old Greek culture. I was immediately interested, because I’ve had the joy of learning about the Portuguese culture as it not only relates to wine, but also how one must first know the people to really understand their wines. To Understand Portuguese Wines, One Must First Understand the People.

My story’s title implies that in learning about the people one will also learn that culture. Today, if I were to rewrite that title, I’d include the word “culture” in it, which broadens the concept much further… And that’s what I was allowed to do… Jump into it: eat, sleep, and drink it, and absorb all that I now cherish about Portugal, thanks to my friends at Enoforum Wines.

I don’t know much about Greece. However, I’ve become a huge history buff as I think about the world in this stage of my life; so, I saw this story delivered to me as a mini opportunity to become more familiar. I’ve loved the Greek wines I’ve been privileged to taste. I understood this incoming Email as a sign to take a brief segue away from my daily clients’ needs, and dig deeper into our past… collective humanity’s past, which belongs to all of us on planet earth.

“The country’s strengths include an incredibly long, uninterrupted winemaking history, of a length that no other country can claim. In addition, Greece boasts over 300 indigenous, unique varietals of unparalleled quality. … Considering that most new world regions rely on one unique grape of distinction, … Greece would seem to be rolling in riches. With a pool of uniqueness as great as the Greeks have to draw on, they will forever have an edge.”

What follows is their history. I’ve been told I can share, so I am. Together, we can learn more about Greek wines. Perhaps you’ll seek them out as I have a few times; so you, too, can taste the museum in that bottle.

From A Museum Inside a Wine Bottle 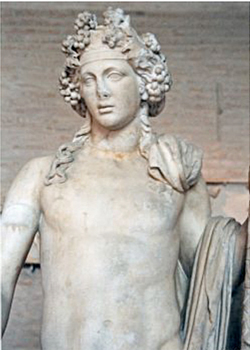 Traveling back in time can shed some light on to how this wonderful journey began. The Gods and Goddesses in the warm blue skies of Ancient Greece inspired many feats, which forever molded mankind. However, it was Dionysus, the one whose legacy sailed the world and time to delight our hearts and inspire our souls: wine, the poetry written by the land and read by the senses. God of many joys, Dionysus became the God of vineyards and wine, gifting Greece the finest selection of grapes, an assortment of more than 300 unique native varieties. With it, this Nation founded the world’s richest wine culture when it composed the first of its wine poetry works, 6,500 years ago.

In the beginning of this journey, ancient Greeks studied the earth, the vine, and the climate, unraveling the mysteries of a perfect mastering of the winemaking art. The fruits of this devotion were vital techniques which, as the ancient Greek writer Theophrastus revealed, were used to: perfectly harmonize each vine in a unique regional soil; plant new vineyards with vine cuts; train young vine shoots, designing bush shapes which protected grapes from wind, promoted contact with the morning dew, and facilitated harvest; and, finally, to limit the agricultural yield, concentrating the flavors and quality of grapes.

Soon, each region’s wine blossomed into a special treasure with a place in the heart of ancient Greek cities; the Agora – an ancient market where thoughts on philosophy, politics, business and many other thematics echoed through the wine merchants’ stands. Here, the amphorae, ancient wine vessels, stood revealing the origin and individuality of their content through elements such as their shape, color and engraved impressions. This system materialized the first form of labeling ever known, communicating with buyers, facilitating their choices, as well as guaranteeing, even then, the identity and quality of the wines.

The wonderful floral aromas of ancient Greek wines were always savored during passionate philosophic discussions, luxurious banquets, and magnificent festivals organized by philosophers, aristocrats, artists and everyday people inspired by Dionysus. Each year, this God was honored for the wealth he had brought to the Nation with several festivals where music, dance and drama performances were offered to him. The “Anthestiria” or “festival of flowers” was one of these events, it was celebrated in February when the jars of wine were ready to be opened and to exhale their marvelous perfumes.

Contours of vineyards, grapes, wine drinking scenarios, and images of Dionysus embellished artifacts made of clay, marble and metal, and could even be appreciated in ancient drachma coins as illustrations of the Nation’s pride in the native viniculture. While the ancient Greek culture spread out, the love for wine was cultivated throughout Europe, with cuts of Greek vines establishing the foundation of wine cultures in the areas of modern Italy and France. The history of Greek wine continued to be written with art, excellence and triumph until the 13th century, a time when many Greek territories were occupied by foreign nations which ruled the country for centuries.

Greece finally gained its independence again in the 19th century. However, the wars and historical events that followed continued to deprive this Nation from the ancient devotion to viniculture. Many vineyards were abandoned, and indigenous grape varieties, such as the fabulous Malagouzia, went nearly extinct.

At some point, I’ll continue with Greece’s present state of wine affairs. For now, this is an interesting and enlightening read…