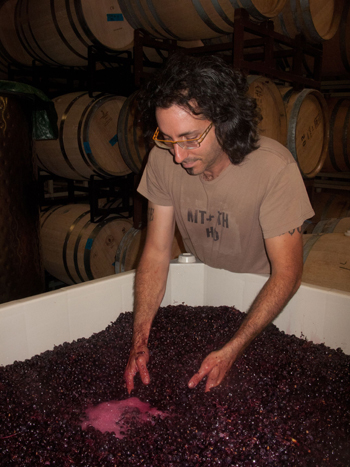 I asked my PSILY members for their Petite Sirah Rosés, so I could do a tasting of Petite Rosés for the Holidays.

Martha Barra (Barra of Mendocino) sent an Email to me to tell me that they didn’t have a Rosé, but the blog posting was a good idea…

Yeah, I thought so, too.

Then, Eric Cohen hand delivered his Shoe Shine Rosé to me.

Later that evening, I opened his bottle and looked at the wine… Still without a label, I consulted the letter he left with the bottle. It was obviously unfiltered and unfined, but still had a beautiful Burgundy-ish color. When I did the nose, I was intrigued, as I am with all of Eric’s wines. When I tasted it, I was blown away… So round, silky… just a voluptuous mouth experience. “How can something so delicious exist?” I thought to myself.

2008 Shoe Shine Rosé of Petite Sirah: Translucent in a pink, slightly brown color… The nose was of strawberries… It tasted like a well crafted Pinot Noir in so many ways… plumy, a bit of spice (from the Petite), and a delicately rich delivery, like the aromas of an old-fashioned rose. The finish lingers… longingly wishing there was more in the bottle.

This young winemaker is such a wonder. I’ve watched him since he first decided he wanted to make Petite Sirah. He’s been through many challenges, with both life and his love of making wine. And, I so want him to stick with it, because he’s so good at it. Since he decided to pursue winemaking, he’s faithfully come to every Petite Sirah Symposium. Even with the first one he attended, I have to admit, I didn’t make it easy for him. My connection at Foppiano was a purist… Her thinking… “If they’re not established, should that person attend?” I advocated for Eric, and he came along… aspiring and bright eyed. The next year, even though he didn’t get an email about the event, he called me again, once again attending. It went that way for a few years. Then, he finally got to make his wine. He sheepishly brought a bottle to the Symposium, telling me, “I’m concerned to share it with others, because they’re all winemakers.”
I told him that’s exactly why he wanted to share his wine… “Get their feedback.”

Now, it’s years later, and Eric’s in a groove. He’s a one-man band, trying to break into the restaurant on-premise business, and finding it next to impossible. I so want him succeed. I want him to do well, because he just deserves it. He’s a man of passion and principles. Eric Cohen is so ready to… as Tim Gunn says…  “make it work…” this Shoeshine Wine. I know I want it as badly as he does, and I need to remind him what Evan Goldstein told attendees at the Symposium to do with their marketing…

Here’s his letter to me… I’m sharing it with his permission, to demonstrate how and why he’s so unique…

Thought I’d leave you with a bottle of 2008 Rose [Shoe Shine Wine]. I call it “Nada Thing” because I added Not a drop of anything to it besides bleeding off some Petite juice at the destemmer when I brought the grapes back from the Edna Valley (Wolff Vineyards).

The drive back for me was really long, from Edna Valley to Napa, and because of the condition of the skins, there was lots of juice sloshing around in the bins >> thus began the Rose. I’ve always wanted to see how wines would age if there was no SO2, etc. — and amazingly, I think it shows No Sign of oxidation etc., after 4 years.

I only have enough to use for meaningful tasting events, etc. to interest folks; but I plan on doing it every year from 2012…

Hope this finds you well.

So, there you have it, a perfectly gorgeous wine, an extraordinary moment to taste, a rare person being able to enjoy it… and I had to beat off Jose with words for this one, when he wanted the last glass of it with lunch… Sorry, Jose. I need to taste it again, so I can write about it… (Oh, yeah, I’m that bad…)

You wine writers out there, if you’re interested in tasting this wine, I suggest you make Eric Cohen your new best friend…