When Cork Dork Is Too Simple a Name, or a.k.a. Charm School Dropouts

I love W. Blake Gray, of the Gray Market Report. When he read this story last year, he commented, “Hilarious, Jo. I don’t know how many if any of these things I’ve been guilty of, but I know in the future I’ll be wary of causing Pourus Interruptus.”

I’ve had time to think about this one… Pourus Interruptus would be another name for either Pusher Uppers or Puller Outters, described in great detail below..

And, I can’t believe that I’ve forgotten this one from the start, Mr. God-helps-those-who-help-themselves. Who died and made you bartender? Would you go into a bar, pick up a bottle of anything and just pour for yourselves? If you answered, “Yes” you’ve got more cojones than a four-cojonesed tom cat. A wine tasting is a bar situation; even though it doesn’t feel like it, because of its casual nature. Get your best charm school manners on, guys and dolls.

I have to confess, I have never seen a woman do this. It’s always been men, and it’s always been men in the wine business. Because they pour wine all day for their clients(s), they’ve adopted a sense of entitlement. Well, think again, buddy, you’re not working for me, and I wouldn’t just pour your wine without asking at any events.

This was first published in Wine Business Monthly. Under the name of Road Warrior Survival Guide. It’s one of my rare rants, and was born from being on the road a bit too much (I think) at the time. While my schedule has slowed down, the following behaviors haven’t, and I see still see them at wine tastings… Enjoy! 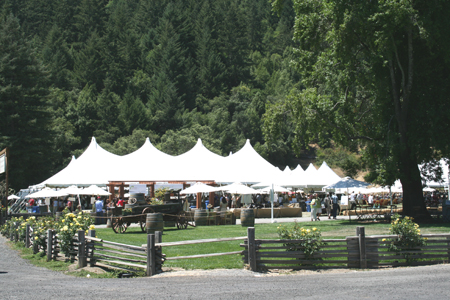 Takes It All Too Seriously – There is one man I’ll never forget… he made my day when he called me “Young Lady.” It’s been so long since I’ve been called “Young Lady;” usually it’s “Ma’am.” I had just poured a Chardonnay that he asked for, and I went into the adjectives; you know, apple, citrus, butter. He stopped me dead in my tracks, “Young lady,” (I was thinking, “How sweet!”), and he then continued, “Do not presume to tell me what I’m going to find on my palate.” Yawn!

Blotters – Who told them that they could rinse out their glasses and turn them upside down on my tablecloth? Oh, those dirty rings!

Dish Washers – Where do these guys get off thinking that my ice tub is their kitchen sink? Each and every person adds more spit than the last. And when you tell them that they’re about the tenth person to wash their glass, they just shrug. Yeooooow! 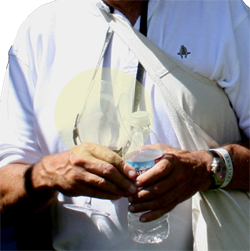 Cornie (aka Chuckle with the Chain) – (note the yellow circle, denoting the hanging glass) Not enough hands or just too clutsy? I can’t decide, but it’s always a giggle to see how some people compulsively put their glass into a glass holder that’s worn like a necklace, and has the potential – with one simple bump – to segue into the next phase… wine-on-shirt badge. (This one proves that we’re all really funny, honestly.) And, I have to thank Chanda Eddens for the name “Cornie.” It’s much better then my “Chuckle with the Chain.” 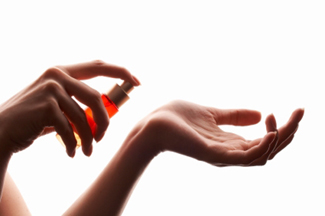 “Don’t Over Do It!” – My return for this jibe is, “You either!” The same guy who can’t get enough wine from a pour invariably spills red wine all over his shirt before the event ends. (Dribble, dribble little louse, I saw you dribble on your new silk blouse!)

“Ya Look Like The Concierge” – “Do you know where XYZ Winery is?” I usually say, “Yeah, in the Sierra Foothills.”

“Parker” (inspired by a conversation with Jose and Amy Biege) – These are people who come to a table to get their taste of wine, put their food plate down on your pristine table cloth (that you’ve brought back from Italy), and proceed to have a conversation with their friends. There should be a rule, “Get your wine, get your information, then step away from the table,” to let others – who’ve also paid to attend the event – get to the wine and the people pouring. People who are pouring wine are there to promote their products. When you monopolize their tables, they get pretty antsy, even though they’re smiling at you.

“Traders/Traitors” (inspired by Robert Larsen of Rodney Strong, which I too, know all too well) – These guys have figured out how to play the game… They’re people who go to a table with an glass empty, and asks, “Can you just fill it up. I just love your wine. It’s the best one here.” Moments later, you see them at a table across the way, getting a full pour, again. Hum… How did they manage that one over there, too?

“Magician’s Apprentice” ~ “So, what do you have under the table?” – If I wanted you to know, I would have already pulled it out. Smile… (Eric S. Crane helped with this one.)

(Cristin offered this one, the last time that I published this story.) You forgot the “’POP’ drinkers.” The one’s who only want the late harvest/ice wine. They wince and they whine at everything under seven percent RS. – Someone must have dragged them to the tasting, in my humble opinion.

“Mrs. I Think I Know So Much, but I’m Proving I Know So little” – I can’t believe I’ve not shared this one before, because it came really early in my wine business experience. this overdressed woman stepped up to the bar, and looking at me by dropping her head so she could see over her glasses, said to me, “I’ll have your Cab Sauv.” Oooo, so sophisticated, and me just a barmaid.

It’s-almost-the-end-of-the-event, “Here – let me drop off my garbage on your linen.” Well, I would, but I really need to keep a tidy presence right up to the end.