Spring and the Blessing of the Vines Tradition 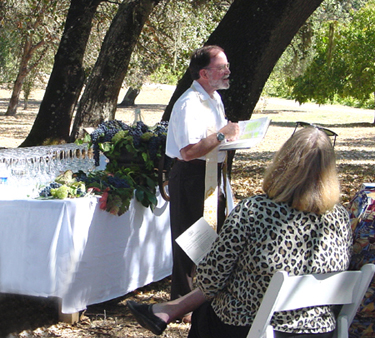 A good question asked by one of my writer friends was, “When did the blessing of the vines tradition start?” I tried to do quick research, because, honestly, I just knew that it exists; but, I had no clue when the first person decided to say a few words, asking the gods to deliver a great crop for that season. Cave people? Phoenicians? Romans? Native Americans had daily blessing ceremonies? It’s just something that most people do… ask the gods for blessings… from fertility to delivery.

My quick research turned up nothing definitive. Everything from winery events talking about having their next blessing to information stored on Wikipedia, all just stated that it’s a tradition. References to the Bible were made, but where in the bible?

I knew where I needed to go.

Here’s what prompted this question, and where I went.

Blessing of the Vines – Tradition…

So… everyone out here just does it, but the real person who can give you great detail is the Reverend Dr. John Staten of Field Stone Winery.

I just spent about a half hour to get the researched version of this tradition, and am now giving up, because I know John Staten can tell us all that we need to know. He’s not only an ordained minister (PhD), but he is also the proprietor of Field Stone Winery.

He’s a dear friend, and I’m Cc:ing him as an introduction for you.

He’s also a long time member of PS I Love You.

John, please see Kathleen’s question below. It’s a great one, and I – too – would love your official answer, as a man of the cloth.

~ John’s answer, which then takes you on a further quest for more info, if you’re wanting to research this subject for your own edification:

Resources re. the Winegrape Harvest “Blessing”

The meaning of “blessing” in its biblical roots (be sure to check out the biblical texts): From The New Westminster Dictionary of the Bible:

The three leading meanings which the verb “bless” has in Scripture are:

The idea of God’s (Hebrew: Yahweh’s) role in the fertility, growth, and harvest of all the fruits and vegetables from the earth is rooted in the book of Genesis: The first key text is Gen. 1-2. (Note that in this first imaginative creation narrative, God, in the earth’s “as the Garden of Eden,” has not provided for humans anymore to eat than vegetables and fruit from the “Garden” (making vegetarians and wine lovers happy!). God is confirmed as the sole creator of the world we live in. (Here is the difference between the “monotheistic” [one God] religions [Judaism, Christianity, and Islam] and the ancient “polytheistic” Canaanite cults before them in the Near East). In the Hebrew Bible the second key Creation text is the account of the great flood and the blessed covenant made with “our ancestor” Noah and his descendents) Noah Gen. 5:28-9:17. God’s “covenant” with Noah and all his descendents (i.e., all who populate the earth) is a great “blessing” (see Gen. 9: 1ff.) Note that, known as “the first tiller of the soil,” was the first to “plant a vineyard”. 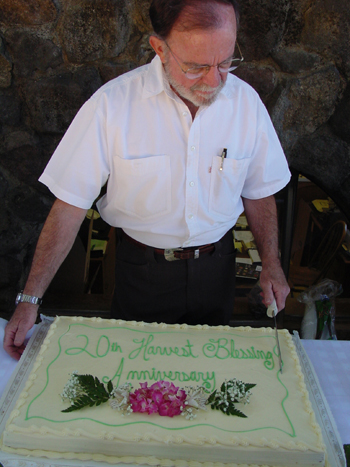 The service I’m faxing to you is in the Protestant and Roman Catholic-Eastern Orthodox tradition. Most of these harvest celebrations have been woven into the worship life of these traditions for centuries.

If you can, check out these books for more information about the role of wine (hence, harvest blessings) in the history of religion.

1. Robert C. Fuller, Religion and Wine; A Cultural History of Wine Drinking in the United States, Knoxville: The University of Tennessee Press, 1996

Reverend John Staten, a former educator, has given anyone who wishes to write an extensive research project, a really great beginning. May your harvest be blessed!