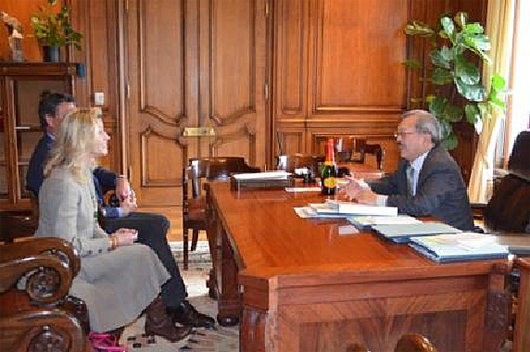 Iron Horse Vineyards shipped 880 cases of its Year of the Dragon Chinese Cuveé to Beijing, on January 10, 2012. It was specifically created to celebrate this year’s Chinese New Year, the Year of the Dragon, which began on January 23 and continues until February 9, 2012. On February 11, San Francisco celebrates with their annual parade. (One of these years, I’ve got to get to San Francisco to be part of it!)

The Year of the Dragon is considered the luckiest of all the Chinese zodiac cycles. I’d say for the Sterling family, this is definitely true, as this Sparkling kick-off signals the beginning of a lovely, annual event for them… with annual releases of their Chinese Cuveé.

What does wine have to do with the Chinese Year of the Dragon? About 1000 cases if you are Iron Horse Vineyards and you make bubbly. Joy says her family’s winery created the Iron Horse Chinese Cuveé to celebrate this luckiest of years in the Chinese astrological calendar. She presented San Francisco Mayor Ed Lee with a bottle at City Hall on Tuesday. “As luck would have it, the Mayor, San Francisco’s first Chinese American mayor, was born in the Year of the Dragon,” says Joy.

The sparkling Cuveé’s label is red and yellow, the colors of the Chinese national flag; and the neck of the bottle has the character for “dragon” on it. Retailing for $98 per bottle, this wine is mainly intended for entrepreneurs and celebrities in China.  Last year, Chinese importer Jaguar Wine Inc., which focuses on high quality wines from the US and France, approached Iron Horse. The dream is now a reality.

From Peg Melnik of the Santa Rosa Press Democrat:

“Jaguar was interested because the Clintons served Iron Horse at the State Dinner for President Jiang Zemin at the White House in 1997,” said Joy Sterling, CEO of the winery. “My family and I are very proud that we have created a top quality American Wine that is now an export success story and that we continue to develop our exclusive partnership with Jaguar in China.

Plans, according to Sterling, are to create a limited edition Chinese Cuvee each year. ”We are really looking forward to the Year of the Horse in 2014.”

According to the Wine Institute:

U.S. vintners shipped $35.7 million dollars worth of wine to China during the first eight months of last year. That’s up by 20 percent from a year before that, with California wines making up 90 percent of those U.S. exports.

The world continues to shrink in the most interesting of ways…