I got my Wine Century Certificate last year, after I had tasted 100 different varieties. It’s not as easy as it sounds, to have tried 100 different grapes. I hit the wall at about 60 different cultivars. Then, I attended an importer tasting in San Francisco, and that put me well over the 100 variety mark.

Is that enough to satisfy me… getting it done and getting the certificate to prove it? Nope… I’m now working on tasting at least 200 different varieties.

[The images for this blog posting are borrowed from the Bodega Riojanas Website. I’ve not visited Spain, yet, so I don’t have any of their images. Once I saw how beautiful this bodega (Spanish for “winery”) is, I felt that you, too, would benefit from putting all of the Bodega Riojanas pieces of their puzzle together.]

I was contacted by Alan Kuper, the Regional Manager West, and asked if I’d be willing to taste a wine from Bodegas Riojanas… The bodega is one of the Region’s pioneering large-scale wineries, I’ve come to learn, and the wine that Alan sent to me is a 2008 Puerta Vieja Crianza, Rioja DOCa. (Puerta Vieja is Spanish for “Old Door.”)

I love old doors. They have so much character, made by the characters who have entered and exited over time. What a great name! I’m in…

Greater to me now is the blend of 80 percent Tempranillo, 15 percent Mazuelo, and 5 percent Graciano… The Mazuelo hadn’t yet touched my lips, and it puts one more notch on my Wine Century belt, as I head toward 200. This new wine just became number 144.  Only 56 to go.

Founded in 1890, Bodegas Riojanas treasures more than a century of winemaking tradition in its Cenicero winery. Its corners are steeped in history and talk of the passion for aging wines that has always permeated it. This tradition and passion have been transmitted to the team that runs Bodegas Riojanas today. Its most precious legacy is its commitment to quality and the personality of its wines.

The Artacho family already enjoyed a deep-rooted winemaking tradition when it founded Bodegas Riojanas with Rafael Carreras in 1890. A reminder of that tradition can be found in the stone gateway that was built in 1799 to provide access to the family vineyards, which is now preserved at the entrance to the Cenicero winery and, especially, in the awards given to its wines prior to the foundation, such as the gold medal earned at the Barcelona Universal Exposition in 1888.

About Bodegas Riojanas from my palate’s perspective: 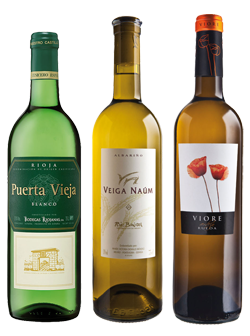 Then came the whites, in a separate shipment. (New varieties for Wine Century are in bold, and the wines delivered big time!)

Does it help that my husband is Spanish? You bet it does.

I learned to love the Spanish culture in not only high school when I took a year of Spanish, but also with two more years of college Spanish. Then, meeting my husband (“Jose Diaz,” it’s like “John Smith” in English) in the mid 70s and having him turn me onto the Puerto Rican culture has me lusting for Spain. These wines are holding me over until the day I land on Spanish soil to tell that story like it’s never been told before… and become completely immersed. I feel it coming closer.