American Viticultural Area (AVA) ~ How Suisun Valley Got Its Name

Working with the Suisun Valley AVA, I’ve wondered more than once how Suisun Valley got its original name. My duties have been to tell everyone what’s going on in the valley today; however, always in the background has been that question. I’ve heard snippets about Native Americans, but nothing that was really sticking with me.

I decided to get to the bottom of it, once and for all. I’m also very fortunate to have some old documents in my working possession, as a writer for Gary Mangels (Mangels Vineyards). It’s from these very old documents, once carefully scanned, that I was able to put the pieces of this puzzle together.

It’s a really interesting story, and I thought that it’s worth sharing, since Suisun Valley is one of our earliest AVA’s in California. In December of 1982, Suisun Valley became our twelevth American Viticultural Area.

Suisun Valley’s recorded human history dates back to the Southern Patwin Indians, who lived between Suisun, Vacaville, and Putah Creek. By the 1800s, the Spanish and European invaders forced these Native Americans into small tribal units: 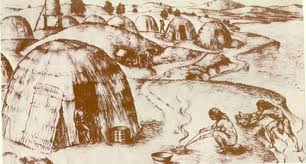 [This image is from U.C. Davis, and shows how the Patwin lived in huts. Some authorities suggest that these Native Americans arrived as much as 11,000 or more years ago.]

In 1823, Suisun Valley was considered by Padre Jose Altimira as the next Spanish Mission of California, to follow the one established in San Rafael. Padre Altimira wanted three missions that would be created as the northernmost edge of their Spanish Empire, as a defense against the encroaching Russian presence. The Spanish padres considered the Russians as a “heathen” menace. Suisun Valley was a location that was considered, but ultimately Altimira decided that this land couldn’t support a large population. He instead founded Mission San Francisco Solano in Sonoma, on July 4, 1823. This became the final mission in California, with Altimira being forced to forget his dream for two more missions.

Suisunes Chief Sem Yeto was baptized by missionaries as “Solano.” At that time, Padre Francis Solano was a missionary to the Peruvian Indians. A story handed down states that in 1850, when Chief Solano died, he was buried in Suisun Valley. Also in 1850, on January 4, the California constitutional committee recommended the formation of 18 counties. The originally named “Benicia County,” was later renamed Solano County, to honor Chief Solano of the Suisunes.

In 1848, Daniel Berry is listed, in the 1877 atlas of Solano County, as being the first American settler in Suisun Valley. He arrived with five other family members, having relocated from Cache Creek. In the fall of 1850, Spanish, Mexican, and American settlers forced the Suisunes out of their valley. The greater part of the tribe migrated into Napa County, by carrying 1,000 bushels of grain on their heads, also according to the 1877 atlas of Solano County.*

A verdant location, Suisun Valley was soon recognized for its superior farming capabilities. Wheat was identified as a crop worth growing. Then, fruit trees were planted by those who migrated into the Valley. Families such as the Pierces, Hatches, and Chadbournes planted apricot, pear, cherry, peach, and nut orchards. These fruits and nuts became prized for their outstanding quality… And so began Suisun Valley’s rich agricultural history.

*Thanks to Barry Eberling of the Fairfield Daily Republic, for his research of Suisun’s history in the 1877 atlas of Solano County.