Summer Reading, wine books are in and I’m lost in their pleasures 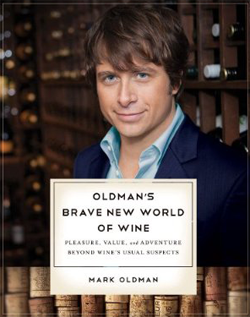 First of all, I have an advance copy of Mark Oldman’s new book, so it won’t be until September that this for sale. You can pre-order it, though, if you just love Mark Oldman’s writing, like I do, so you get it as soon as it’s released.

Mark admits that his mission, “pure and simple, is to fast track you to a world of pleasure, value, and adventure beyond wine’s usual suspects.” His epiphany for this book came at a gathering of wine pros, when he realized that this kind of total enjoyment of wine should be shared by everyone who has an interest in it, not just held for the few of us who are totally immersed in the business of wine.

A truly great idea. I feel the same.

He mentions the emergence of a new gastronomy, in both liquid and solid foods, with more intriguing liquid wine offerings being made available to American consumers over the Internet. The  overnight, direct delivery shipments to homes is bringing the world of wines to everyone’s door. We’re in an amazing time.

[EDITOR’S NOTE: Com’mon people, don’t let that change with Bill HR 5034 being passed. Write to your legislators today, and tell them what a sham this bill truly is.]

Mark wrote to me:

And I think you’ll dig the PS write up….I mention “PS I Love You” in it….the name of the chapter is, “Petite Sirah: Dark and Intense as a Dominatrix’s Boot” !!

Okay, how could I not love this one? 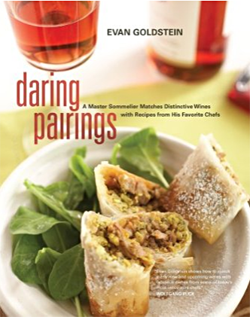 “Finally,” I thought, “people are really getting it.”

…”But then something happened. In 2002, the P.R. company, Diaz Communications, began their effort to resurrect Petite Sirah on behalf of the then 60 growers and producers who still stood by it. Through relentless promotion, Jo Diaz and her husband, Jose, broke through the public’s and the critics’ indifference, and put Petite Sirah back on the map. Today, there are 126 growers and an astounding 723 producers, most of whom make fewer than 500 cases of the variety, and acreage is higher than it’s been at any point since 1980.”

Petite Sirah is now back on the map. People like Evan, with his educated palate, just like Steve and Mark’s, are paying enough attention to see PS as newsworthy. It’s very rewarding.

In Evan’s book of 353 pages, pages 260 through 267 are devoted to PS. I’m giving you the number of the pages, lest you think that PS is an overriding factor in Evan’s book.  It’s not. It just has its appropriate place, and that’s all I could hope for. I also did learn some new info about PS. That’s always a delight.

And, like all other of his darings (consistency throughout), he gives history, synonyms, styles, flavor lexicons, pairings and pairing pointers, along with a chef’s favorite recipe. I knew enough about PS to quickly read it. It are his explanations of other more obscure grapes that I’m going to be totally digesting, like vermentino, aglianico, mencia, txakoli (cha-koh-lee, he gives pronunciations, thankfully), and verdeio (vehr-day-hoh).

I’m really inspired to find these new cultivars. So much to learn, so little time. I’m counting on some lazy summer days, when it will be too hot to be banging away on my computer. Instead, I’ll be reading in our hammock again.

To order your own copy: daring pairings, by Evan Goldstein MS 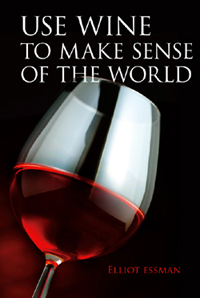 Use Wine to Make Sense of the World, by Elliot Essman

This book came to me as an offshoot from my Wine Century Club meeting with Jim Caudill. He asked if I had read Elliot’s book yet, and I had to admit that I hadn’t. Jim asked Elliot to send a copy to me. Elliot, another great wine writer, has received a prestigious James Beard Foundation Journalism Award nomination for his writing in the “Spirits, Wine or Beer” category.

I know this is going to be one of those inspirational books, where I’ll be able to read it with one hand and have a glass of wine in the other, while curled up in my hammock. (It’s a sitting-type of hammock.) Quickly skimming, I’m seeing lots of poetry and how to make sense of wine in every situation from desire and lust to the five senses, and making sense of it the natural world. This one will be taken in small doses with lots of insights into Elliot’s wine journey. Who knows, it could be one of those that I pick up and never put down until the end of the journey. I’ll get back to you with that.

To order your own copy:  Use Wine to Make Sense of the World, by Elliot Essman

Next, I’ve been waiting for about a year for this one to come out, because earlier Evan Goldstein had confided in me that his book is going to have a chapter on Petite Sirah, and new I’d love it. He’s so right. An eight year campaign is paying off in ways I never foresaw.

“But then something happened. In 2002, the P.R. company, Diaz Communications, began their effort to resurrect Petite Sirah on behalf of the then 60 growers and producers who still stood by it. Through relentless promotion, Jo Diaz and her husband, Jose, broke through the public’s and the critics’ indifference, and put Petite Sirah back on the map. Today, there are 126 growers and an astounding 723 producers, most of whom make fewer than 500 cases of the variety, and acreage is higher than it’s been at any point since 1980.” 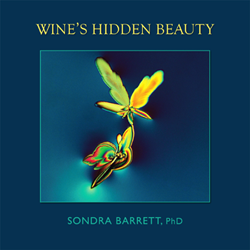 Get ready. This one’s not light reading. It’s “profound,” in a word. I’ve never seen – or read – anything quite like Wine’s Hidden Beauty. This is an amazing collection of Sondra Barrett’s stories over the years, all culminating in this masterpiece. Trained as a biochemist, Sondra’s perhaps the best person on earth ~ and the first ~ for taking something like wine’s sentient chemistry and scientifically defining what makes wine’s physicality segue into its godly spirituality. Oh, I can hear the scientists now, “How can science even think, ‘God, the unproven?'” Well, Sondra’s simply (with a big question mark for the word “simply”) found the molecular structures, and defined them as the essence of all life.

No wonder people, since the beginning of time, have referred to wine as Nectar of the Gods… We are what we eat (and drink), after all.

She’s been featured in international publications, at tasting events, in wineries, and in museums. Her work is part of the Olympus Bioscapes 2009 Museum Tour. Barrett shares her passion for the heart and spirit of wine in her new book Wine’s Hidden Beauty.

On her Website www.SondraBarrett.com, it’s written: “The microscope gives us an illuminating view of the familiar. Discover the tantalizing expressions of wine, food, inner space and mystic molecules.”

I’m nearly finished this one, and have already started writing, Ode to a Wine Incarnate. She’s inspired me.

To order your own copy of Wine’s Hidden Beauty.