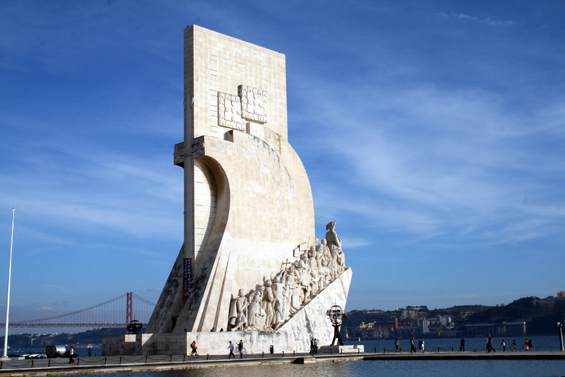 While in Portugal and the Alentejo wine grape growing region last fall, I was a guest of my client Enoforum Wines. At the time, I received a well-rounded education from my colleague Delfim Costa. It was a huge amount of information, though, and I’m honestly still digesting it all.

From the beginning of our relationship, Delfim has taught me that to understand Portuguese wines it’s most important to first understand the people of Portugal. To do this, one has to take a really thorough look at the Portuguese Age of Discovery, as well as study their early beginnings. During their early years (B.C. to Medieval history) when the Phoenician, Romans, Moors, Germans, and other Iberian people all invaded their land, each of these foreigners intermingled with Portuguese culture, creating truly unique diversity within this country.

How does all of this tie back into wine? It does seem like an immense stretch of the imagination. I’ll give you that.

I’ve come to realize that the diverse culture of the Portuguese, their early gatherings from all over the world, their openness to adventure and discovery, their passion for all things which enrich their lives… All of these things tie them back into a simple daily life that demands sustenance, but not with a mediocre lifestyle. Nay… It’s one that demands the freshest of ingredients; first from within, and then from around the globe. They have a heightened sense for the most intriguing of flavors, both in solids and liquids. 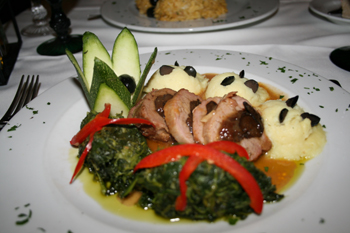 The amphoras left behind by the Romans began their wine journey. The spices from around the world began their flavor journey…. All coming back to their daily sustenance, and now their willingness to share what they have enjoyed for centuries upon centuries with others who are interested.

The Portuguese have returned to the global market with a renewed spirit. Today, we’re all able to sample their history and passion within their wines… And, if you’re lucky enough, also within their foods.

I’ve studied and written about those early days, and now want to write about the Portuguese explorations and discoveries that began in 1279, when King Diniz set out to improve Portugal’s emerging navy. So began their Age of Discovery, which is most widely recognized as the years between 1415 to 1542.

It’s fitting that there’s a Monument of Discoveries in Lisbon on the Tagus River, just 13.8 miles from the Atlantic Ocean. It was inaugurated in 1960, during celebrations of the 500 year anniversary of the death of Henry the Navigator. There’s a sprawling walkway made from a combination of cobblestones and tiles, which leads to the actual monument. It’s an amazing sight to behold, before you even reach the memorial. 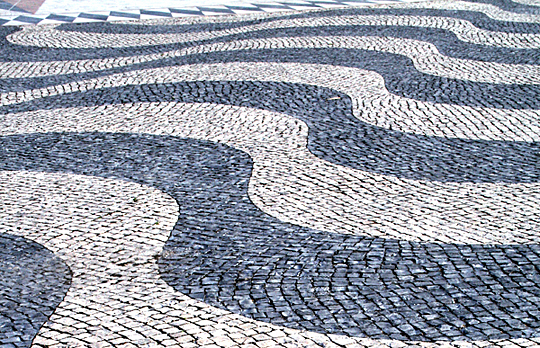 As I began to walk toward the monument, I first saw cobblestones that led toward the Tagus River. It was like I was adrift at sea. It was so realistic that it felt like the stones were dimensional, which they weren’t. It’s a flat surface.

As I continued, what was revealed was a much more significant stroll than I could have earlier imagined. 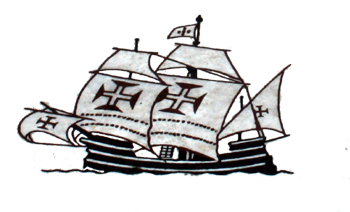 As I continued toward the monument, I couldn’t help but spend my time looking down at the stones beneath my feet, because it was such an unusual sight. I began to realize that they were giving me the impression of water in motion. But then, as I walked even closer toward the river, the stones turned into tiles, and I began to see triangular shapes, which were then revealed to be compass rose points. This all took time to interpret. As I got closer to the center, I began to see caravels. Caravels are a style of ship that Prince Henry the Navigator crafted, with their advantage over older ships being their triangular sails. These canvases could be trimmed to allow the ship to proceed in either cross or head winds. This was a first in shipbuilding; so, Henry basically invented the sails that we see on all of today’s sailboats. 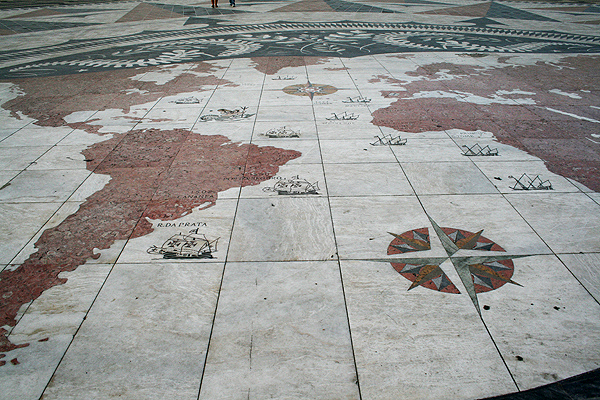 Some caravels had a date and name of an important Portuguese discovery, revealing a world map of their explorations. From above, you’d immediately get the Compass Rose of Lisbon (Rosa dos Ventos do Padrão dos Descobrimentos, or Wind Rose of the Stone Monument of the Discoveries), but walking toward it and in it takes an inordinate amount of time to piece it all together. It’s like walking on a puzzle and being absorbed by each minute image, and then realizing there’s something much more big picture about it. In about an hour, I was able to view history as the explorers must have done in their 127 years of circumnavigation. I didn’t come away with their spices, gold, and riches; but, I did come away with a wealth of images that I could later (right now) begin to piece together… And it is all that they explored in a visual time line. 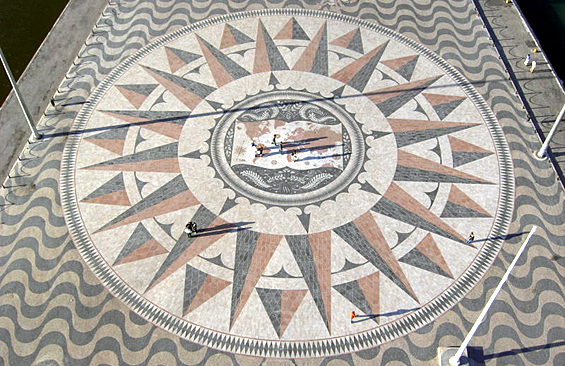 [Above image was taken by Nol Aders.]

Why the Age of Discovery?

Overland trade routes from the east to Europe and the Mediterranean primarily ended in Genoa and Venice. From there, products and spices (a necessity for their foods) would then be distributed… In a three-tied system. Portugal wanted to have direct access to these goods. (Sound familiar?) 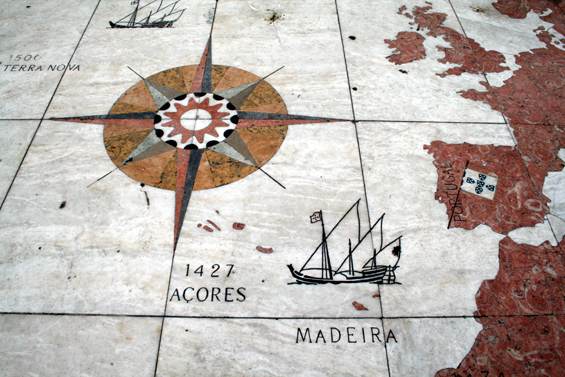 During the Age of Discovery the Portuguese enjoyed the following: