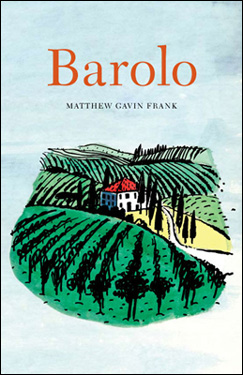 Matthew Frank is a new writer in my world of wine writers. I could say that it’s his youth, because some of the truth is just that. I could also say that it’s because it’s his leap of faith into doing something, writing about it, and then getting it published, long before he slaved over a journalist’s desk. This is also true. I can also tell you that he found me, because of Juicy Tales. This is now helping me immensely, because my searchings are no longer a one-way street. For this, I’m eternally grateful.  I can use all the help I can get these days, as the playing field is becoming more crowed all the time with a prodigious array of talented wine writers.

When I got Matthew’s email, he sent the following:

This is Matthew Gavin Frank, the food-wine-and-travel writer. My memoir, BAROLO, about my illegal work in the Piemontese Italian food and wine industry was recently released.

He wasn’t yet in my radar, because Matthew began his writing career as a food and travel writer. His work has appeared in The Best Food Writing 2006 anthology, The Best Travel Writing 2008 and 2009, Gastronomica, Plate Magazine, Creative Nonfiction, The New Republic, The Nervous Breakdown, and others).

What I didn’t have the heart to tell him at the time he first queried me, but I have no problem telling PR people is this:

I get queried for writing about newly released books a lot, mostly from PR agencies. I can talk to agents very openly and candidly. I always say to them, “Look, my wine blog is a labor of love, and I’m not compensated for the three to five hours I’ll be writing about a book. I get compensated from my day job, though my clients. When I’m spending from three to five hours writing a blog entry, it’s a good amount of money per hour down the drain for me; so, if you can send the book to me, keeping me from running around to buy it, I’m happy to read it and then write about it.”

I generally figure this is a pretty fair deal for someone. It’s my time reading, forming an opinion, then writing and formatting… All for the sake of love, because blogging isn’t a paid profession.

I went on to tell Matthew:

Because it came directly from you, I just let it go, and decided that I’d do the Q&A, then give you publicity for you newly released book, without having to buy it myself.

Here’s where I’m going to pay you the highest compliment I can possibly give to you… After reading your 13 answers, I’m now compelled to buy your book.

You deserve to earn the stipend you’ll get from its sale, because your writing – as evidence by your answers – has allowed me to peek inside of your writing world; not only totally piquing my curiosity, but most importantly, making me want more.

First time for everyone, which is why I never say “never,” and didn’t… just said that I needed time to read your book. Now I know I’ll find the time.

Great job. You’re hysterical… A man after my own heart. 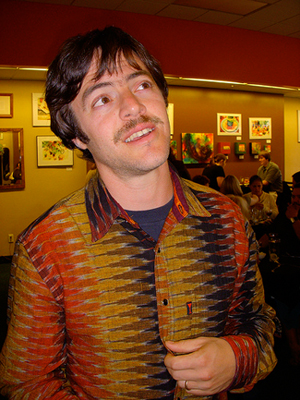 As we continued our Emails, I got a sense that Matthew’s sense of humor might be coming from a Sagittarius perspective. Sagittarians are the jesters of the Zodiac, who travel the globe in search of adventure; and, it takes one to know one on that inside edge… I was right, when I asked him if he’s a Sagittarian.

The time he took to answer my questions, and the humor which was infused throughout, makes me know that I’m going to be laughing about his illegal work in the Piemontese Italian food and wine industry… I’m betting that he might have turned it onto its head for a while… and I want to know all about it.

Enjoy this Q&A. It’s a typical Sagittarian’s life (jack of all trades, master of none) taken to a high art.

[Q]  Many wine writers also have a day job. If wine isn’t your job, what is and for whom?

I am a Visiting Writer-in-Residence at Grand Valley State University in Michigan. I teach food writing, nonfiction, and poetry, occasionally contributing to food and wine magazines like Plate and Gastronomica. Before this, I spent over 15 years in the food-and-wine industry. I ran a tiny breakfast joint in Juneau, Alaska, worked the Barolo wine harvest in Italy’s Piedmont, sautéed hog snapper hung-over in Key West, designed multiple degustation menus for Julia Roberts’s private parties in Taos, New Mexico, served as a sommelier for Chefs Rick Tramonto and Gale Gand in Chicago, and assisted Chef Charlie Trotter with his Green Kitchen cooking demonstration at the Slow Food Nation 2008 event in San Francisco. I’ve also been a janitor, ski lift operator, ice cream truck driver, and pool boy.

[Q] When did you start writing about wine?

I thought a lot about wine before I ever wrote about it. And I drank quite a bit as well. I began writing about wine during my stint as a Nebbiolo grape-picker and cantina floor-mopper for Italian Piemontese vintner Luciano Sandrone, in 2000.

[Q] What prompted you to start writing about wine?

I came to write about wine through a particularly serpentine series of events involving a childhood of microwaved omelets, a teenage culinary rebellion ignited by a horrible version of Creamed Chipped Beef on Texas Toast, a move to Alaska where I started an avant garde catering company (read: lavender tea with frozen salad cubes), an obsession with cookbooks, sixteen years of working in the restaurant industry, a trip to Barolo, Italy, an unexpected meeting with Raffaella Pittatore, who ran a farmhouse bed-and-breakfast there, and who allowed me to live out of my tent in her garden for 6 months, while she found me illegal work picking wine grapes and mopping cantina floors with a series of vintners, including the famed Luciano Sandrone. My memoir, BAROLO, charts this gustatory evolution from microwave-dependent Big Mac eater to a guy who seriously muses over what he eats and drinks. It’s about a food-and-wine-and-life journey—which is exhilarating, informative, frightening, hallucinatory. And tasty. All the good stuff.

[Q] What aspect(s) of wine do you most enjoy covering?

I love learning about the people who make it, who devote their lives to it, and their interrelationships. Oftentimes, they are wonderful, obsessive eccentrics. When traveling in wine regions, I talk to a lot of people. I eavesdrop. I sit in one place for a while and observe—be it a café or bus stop or museum or library or pear orchard. Then, sometimes, I try to muster the courage to talk to them, perhaps insinuate myself into their lives. I frequented certain butcher shops and restaurants and bakeries over and over again until the butcher or chef or baker started asking questions. One thing led to another. In Barolo, I stood out as this goofy, awkward American guy who, to many of the residents it seemed, was in need of some kind of mothering. People took me in. It was very fortunate.

[Q] How has your job changed since you’ve started?

I seem to have evolved from occupational nomad-on-the-fringe, to acceptable and, damn-near respectable nomad. I don’t know how this happened. Perhaps it’s my affiliation with academia now, but I have only one year left on my Visiting Writer contract here at the university. Then, I’m in the wind again. That fringe is always out there, for better or for worse, beckoning.

[Q]  What’s the most memorable wine you’ve ever tasted?

A 1964 Boschis Barolo. I remember opening it, decanting it in this stone kitchen of a farmhouse in Barolo, Italy. I left it there for an hour, and then returned. The entire kitchen was perfumed with the stuff. Violets and tar. The wine was so rich, it was almost like a liqueur.

The Nebbiolo grape-based wines still dazzle me. Yes: they are wonderful on their own, but paired with the sense of familiarity and nostalgia, and my friend Adriana’s hazelnut-apple torte, they are irresistible.

[Q]  Do you believe that there are better quality, lower priced wines today, than in past vintages?

Not necessarily, but there are certainly more of such wines available in more places. There were always fabulous “better quality, lower priced” wines throughout places like Italy and Portugal and Argentina, and Chile, and South Africa. It’s just that more folks around the globe have access to them now.

[Q] What’s your favorite innovation in the wine industry over the past few years?

Hmm. This is tough. Looser exportation laws? Greater global distribution? Anything that can get better wine from more places into my mouth.

I’m a classicist. From oysters and champagne, to chocolate and Barolo Chinato.

[Q]  What are your interests outside of the wine business?

If my former occupations have anything to say about it, I’d guess: omelet-eating, skiing, mops, ice cream, and swimming, though only omelet-eating and ice cream are true. Also: traveling (grabbing me now, outside of Italy, are Oaxaca, Mexico, and South Africa), and experimental cooking. I’ll have to stop here, lest I begin to sound like a personal ad (long walks on the beach, a sense of humor…)

[Q]  Who inspires you (wine business or outside of it, doesn’t matter)?

Chef Charlie Trotter’s crazed dedication is a cross-eyed reminder that excellence is attainable. I am obsessed with food and drink and still no one does food and drink and travel like MFK Fisher—she dives headfirst into the human and the sensual and I feel robbed by my birth-year because I never got to dine with her, never got to kiss her. Her writing makes me long to do, at least, both. I adore, of course, “The Gastronomical Me,” and her lesser known “A Cordiall Water,” which details various oddball medicinal recipes and practices, spanning place and time. The book inspired me not only to place-travel, but to time-travel as well—which can still be done in certain places it seems, like rural Africa (where my wife is from)—places that float outside of time, which, in a way, allows the traveler to similarly float, providing for future awkward conversations with folks who self-identify as “grounded.” I’ve always tried to be grounded, but I think I may have to take a class. My favorite anecdote in “A Cordiall Water” involves Fisher’s conversation with this ancient woman at a bus stop in Dijon. The woman tells her about her granddaughter’s death; how, the entire family gathered with the stymied doctor in a small, hot room around her deathbed; how the old woman went outside and gathered a bunch of frogs in a burlap sack and placed them on the dead girl’s chest. The trapped frogs hopped about in a failed attempt to re-ignite the girl’s heart. The old woman then got serious. She trapped a pigeon and, with a kitchen knife, sliced it open vertically, unfolded its body from its organs, and placed its still-beating bird-heart onto the chest of the dead girl. In an instant, the girl came back to life, sitting up with a deafening inhale. This story made me want to go to Dijon. That Dijon. This story compelled me to listen to people, to eavesdrop and over-observe—at bus stops or otherwise.

[Q]  For what would you like to be remembered?

My chicken liver ice cream, and all of its implications.