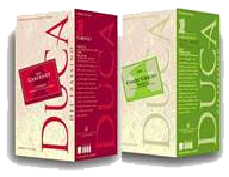 Boxed Wine Experiment: I’m a huge proponent of boxed wine. I regularly have a box of white wine in my refrigerator for easy access. It’s a great space saver, and they allow me to buy a lot of wine at one time. I love having it and not having to store it elsewhere, or worrying about it becoming oxidized if we don’t enjoy it within a few days. Boxed wines are touted as having a six week shelf life, once tapped and put into action.

I was sent an Email and asked if I’d write about this new DUCA DEL FRASSINO brand from Italy. It’s the first ever Italian boxed wine. I suggested that a box be sent to me, and I’d conduct a six week experiment, similar to what Dorothy Gaiter and John Brecher did. The one caveat was going to be that they had six boxes and went back and forth from box one, to box two, to box three, etc., until they had experienced the entire six weeks. I don’t have that kind of refrigerator space, and the experiment has already been done by a couple of complete pros.

So, here’s what I found, six weeks later.

Can it last six weeks? Yes, it can and the Duca del Frassino’s Garganega/Pinot Grigio proved itself worthy.