The Honor of Organic Wines, as Taught to Me by Fabius 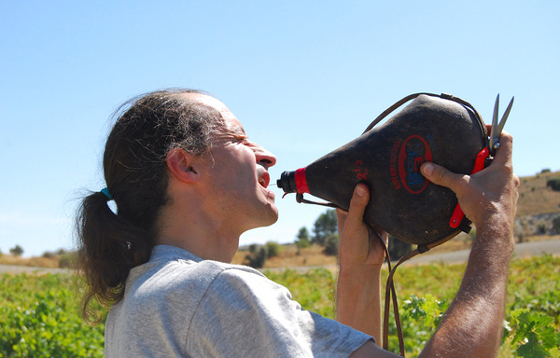 During the 1960s, I crossed over into the antidisestablishmentarianism movement. It was a very exciting time… part of the bra burning process. It wasn’t necessarily easy, because I was in the business of fashion at the time, and my persona took quite a diva dive. I went natural, nursing three daughters.  Never once did a plastic bottle with a rubble nipple ever touch my children’s lips… The mere thought of a bottle filled with “formula” just turned my stomach. “How could I possibly do that to my children?” I thought, and I never did. They went from me to a cup; from my milk to solid foods. In my world I gave them the best of the best, including shunning plastic diapers, so landfills (and the world’s ecology) wouldn’t have to deal with that one. Remember, that was back when they were invented, and the best thing since an electric knife. And, yes, I gave away all of my electric appliances, took the legs off my table so we could sit on the floor to dine, and threw out my TV. I learned and practiced to this day transcendental meditation and yoga. In my world, I was organic… eating whole foods from my local natural food store, and became a vegetarian. I hated tofu, so I became a bit malnourished, but that’s another story.

Time went on, and I (like everyone else from that generation) morphed with the times; however, the principles still lie within my moral and ethical code. The years have made me more tolerant of others who are different than I am. That’s part of the aging process, and one of the beautiful things about life in the mutable zone.

So… Do I love the concept of organic wines? Oh, yeah.

Do I only drink organic wines? It’s not possible.

“Why?” you might ask. Because organic wines don’t support my existence. I don’t have one organic client. I do have a huge range of clients with whom I work, and I’m very open to what they’re doing, because we support each other. I appreciate the organics, but they don’t need me or my services so far. I’ll let you know when (and if) anyone steps forward. I’d love to tell that story for a winery. It’s so pure, and I’ve only strayed off that purist path a bit. In my hippie days, I lived hand to mouth in Maine as organic. I can’t see doing that in California’s wine country, because I would have to become a field hand, and my needs have grown in life… I have to pay for my computers, printers, phones, etc.

So, back to the honor of organic wines.

I was just reminded of my early earth momma days by Fabius of Vinos Ambiz.

For the last two weeks, he’s commented on my story/experiment with boxed wine. He has the same exact aversion reaction to boxed wine that I had to feeding my children with a bottle and formula. And I get it, because he’s currently working the same earth I worked (and still work) in my organic vegetable garden, 40 years later.

The honor of what he’s doing can’t be underscored, and is the exact opposite of my story/experiment, so in his world I’ve sold out. I’m okay with that, because it’s a great debate. In my world, any objection is simply a request for more information. In this case, it would only be answering his “why” would I bother give a large company any space on this blog. The answer to that is the Honor of Writing. In my writing, I’m open to learning what the world has to offer as an opportunity to learn more, and share with anyone interested in what I’m doing as a wine industry publicist.

Paul Dolan of Mendocino Wine Company has had space on my blog, the father of organic wine, because I know him well. He’s one of my PS I Love You members. I wrote about him on an Earth Day. It just made sense. [I just went back to find the file so I could give you the link. It appears that the link became broken, when my blog was shifted from one server to another. I’ll have to see what I can do about that. I liked that story.]

Here’s what I’ve learned about Fabius, because he’s taken his time to read this blog. Commenting on my blog sent me to his to learn a bit about him, too, and I liked what I read.

He’s a passionate man, who lives in Spain. He’s currently pruning his Vinos Ambiz organic vineyard, and he’s living life his way without compromises. He can take leisurely lunches, which I know must be wonderful. He’s taking time – with his blog – to teach others about the biodynamic principles that he’s learned and is using, and complimenting that with images. His ladybug is pointed out in this way:

Here we can see a ladybird (US: ladybug), a bit out of focus (sorry, will do better next time). Ladybirds are our friends! They are super-predators and eat all sorts of nasty aphids and bugs that attack the vines/grapes. This is just a small part of the vastly complex biodiversity that we work to create in the vineyard, as opposed to using industrial agro-chemicals that poison the environment and affect peoples’ health.

He takes his readers through the day-to-day workings of his company, which includes labor intensive bottle washing for recycling, for instance. He writes about his joys and woes, and he has time to talk about wines he’s tasted. (You’ll find that in his category: Twitpic)

What Fabius is doing is chronicling his journey. It makes me wish the Internet had been invented for consumer use back in the days of when my spirit was lifted and set free.