Up, Up and Away ~ Sonadora’s Headed to the Alentejo

When I ran the contest, Why I Want to Go To Portugal to Visit Enoforum Wines with Jo Diaz, Sonadora (aka Wannabe Wino) immediate reacted, beginning to cement her place as the winner. And… she did win.

Then, the universe delivered a blow.  When it was time for her to leave, she had contracted the dreaded H1N1 virus.

That moved everything into overdrive, and the runner up Wine Predator was contacted. As fate would have it for Gwendolyn Alley, who has a second (and more prolific) Website Art Predator, Portugal was to become one of her new passions. Portugal offers not only wine and art, but it also offers amazing adventures and great foods, for which she could completely immerse herself; and she knows how to live, I learned that immediately.

Off Gwendolyn and I went to Europe; for both of us, it was our first time to cross the Atlantic… A fabulous introduction to the Old World.

It was bittersweet for Gwendolyn and me. We both knew that we were leaving Sonadora behind. It was a disappointment for Sonadora that didn’t last long, though, because my dear friend Delfim Costa of Enoforum told us that Sonadora could travel to Portugal when she was ready.

Imagine… winning a contest, losing the opportunity because of illness and having to give up a trip to Portugal, and then being told that the trip is just postponed, not lost.

From what I’m learning, Enoforum Wines is a company with a lot of insight and heart. Sonadora’s flight was preserved, and placed into the re-ticketing mode, waiting for when she could return.

Today, January 9, as I write this, Sonadora is packing her bags. She leaves at 5:00 p.m. today (Eastern Time) to arrive tomorrow morning at 8:00 a.m. Portugal’s time. She also has been allowed to bring Lindsay, a lifelong girlfriend, with her. Enoforum Wines is now giving a third American wine blogger a chance of a lifetime trip to explore this up-and-coming magical region in Portugal known as the Alentejo.

Gwendolyn and I both know what pleasures abound for Sonadora and Lindsay, and you, too, can follow Sonadora and Lindsay this coming week. (Sonadora is sharing her blog for this trip, so we can also see Portugal through Lindsay’s  eyes. I did tell Sonadora that it’s hard to journal during the trip, because unlike a captain of a ship at sea with the quiet of the night to record the day’s journey, there’s going to be very little down time at night to catch up. The Enoforum team of Delfim, Isabel Ramos, and Luis Ribeiro, will keep them very busy, with dinners of delight running late into the evening… There’s so much to see and do, and it is, after all, a once-in-a-life-time happening. So, luxurious sleeping in is not on the agenda, nor should it be. (We’ll all get that when we return on our own with our husbands. Yeah, it’s that good.)

Meanwhile, here’s a preview of what Sonadora and Lindsay will be doing… You can follow this week of travel, if you have any interest in learning about one of the most fascinating places I’ve ever visited in the world. Also, with very few exceptions, this was also Gwendolyn’s and my itinerary. Sonadora and Lindsay will also have Óbidos and Batalha to visit, as Gwendolyn and I missed that. We had the European Wine Bloggers Conference that we attended for four days in Lisbon that Sonadora missed… all things have become fair and equal.

I’m going to find it fun to revisit through Sonadora’s eyes. You can also revisit these places through stories that Gwendolyn and I have written, and will continue to write. Speaking for my own self, I was given a year of stories ahead, because each detail – for me – holds about 1,000 words of a blog entry: 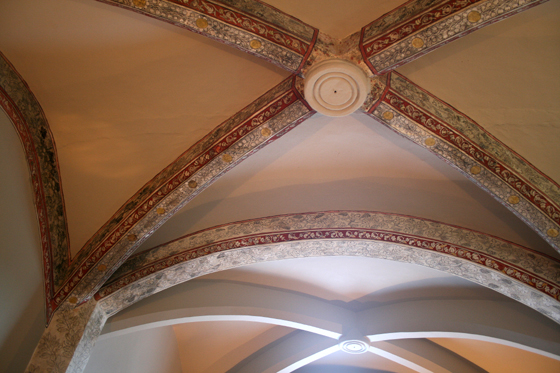 [This image is of a ceiling at the M’Ar De Ar Hotel Aqueducto in Evora. Notice how tiles in this alcove are of a very special design, and created just for this location as an enhancement.] 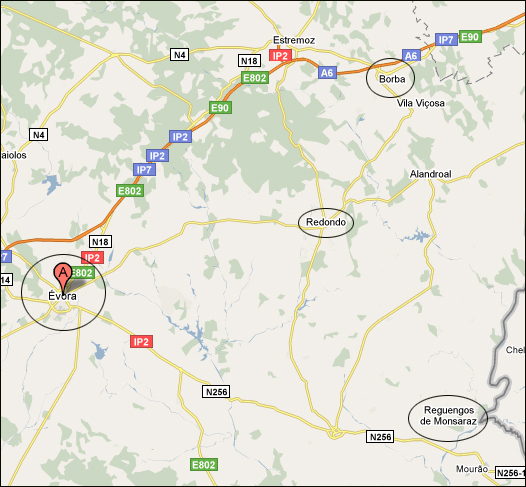 [Snapshot of their Alentejo travels.]

Jan. 11 ~ Departure: Reguengos, visit Carmim’s vineyards and winery, tasting wines of Reguengos de Monsaraz, visit to historical Monsaraz with lunch in the Castle of Monsaraz, then return to Évora. Dinner is again in Évora.

Jan. 12 ~ Departure: Borba. Visit Borba Winery and taste their wines. Lunch “A Cadeia” (Restaurant The Jail) in Estremoz. Next, visit Vila Viçosa and Alandroal, with dinner back in Évora.

Jan. 16 ~ departure for US from Lisbon Airport, and back to reality they go…