Portugal, The Land of Azulejos ~ From Wine, to Floral, to Frescos ~ It’s All Historical

At the end of October this year, I traveled to Portugal as a guest of my wine client, Enoforum Wines. This was done so I could learn about their wines, their people, Portugal (as a wine making country), and the Alentejo (as a wine growing region).

Having traveled there to study all of this, I was given an intense visit (from 9:00 a.m. to 11:30 p.m. every day for 10 days). And yet, I still consider what I learned to be a very basic understand of Portugal, its people, and its culture. I write “basic” because how could I possibly get very deeply into a culture that’s existed for over 2,000 years? Ten days can’t even begin to scratch the surface of their millenniums, but we gave it our best shot. It also helped that I have read Martin Page’s book The First Global Village ~ How Portugal Changed the World a couple of times in 2009. This book delineates so much of Portugal’s history. Still, reading it is one thing, and putting the details into context was/is yet another.

I was given a most amazing and comprehensive tour by my new Enoforum friends. I can’t image anyone else doing this tour in any better way. From Cascais to Sintra, from Lisbon to Evora and the Alentejo, my eyes were constantly dazzled, my palate was on continual high alert for new flavors of delight. If I were to plan a trip to anywhere in the world right now, it would be to go back to Portugal. I now know all the things I want to do next, to get deeper into what was just brushing the surface for the centuries of history to which I was exposed.

This overall understand now helps me to craft better messages… Culture and history also play a major role in the grand scheme of Portugal and the Alentejo’s all encompassing terroir.

As I was traveling around, one thing I noticed were tiles (azulejos). A major aspect of Portuguese architecture, azulejo are found everywhere… from churches and palaces; to homes, shopping malls, train and subway stations. They’re applied to walls, floors, and even ceilings. They’re not only used as  ornamental art forms, but they also have the functional aspect of temperature control in homes. Some chronicle major historical and cultural aspects of Portuguese history, while others are simply ornamental. They range from traditional to contemporary. They’re used both inside and on the outside facings of homes, buildings, and offices. Portuguese tiles decorate, or are combined together to create murals, like this one of harvest. I can only imagine the artistic side of creating this kind of ceramic… the design, the firing, and then lining them all up to create a complete the image.

The azulejo refers to a typical form of Portuguese painted, tin-glazed, and ceramic tile work, chronicling without any interruption, the last five centuries as an art from. Interestingly, they’re also a tradition in former Portuguese colonies in Latin America, as this artistic aspect traveled the high seas with Portuguese explorers.

The art of these azulejos tiles can be broken down by centuries; beginning with the 15th Century, when the Moors, who invaded Portugal, first introduced them. The Moors had earlier learned this art form from the Persians. The word azulejo is derived from the Arabic word: الزليج (al zulayj), meaning “polished stone.” This origin explains the unmistakable Arab influences in many tiles, with their traditional interlocking curvilinear, geometric designs, or floral motifs.

WIKIPEDIA SOURCE: The earliest azulejos in the 15th century were dry-string tiles (cuerda seca) and azulejos alicatados (panels of tile-mosaic) in Moorish tradition, imported from Seville by king Manuel I after a visit to that town in 1503. They were glazed in a single colour and decorated with geometric patterns. They were applied on walls and used for paving floors, such as can be seen in several rooms, and especially the Arab Room of the Sintra National Palace (including the famous cuenca tiles with the armillary sphere, symbol of king Manuel I). The Portuguese adopted the Moorish tradition of horror vacui (‘fear of empty spaces’) and covered the walls completely with azulejos.

Tiles have continued to grace walls, floors, and ceilings since the 15th Century; each century has a different and evolving focus. The tiles themselves, in the grand scheme of things, tell their own history. This would be one of the studies I’d like to do in Portugal… To just spend a week taking images, and fitting the tiles into a time line. I’m sure there’s a book out there already devoted to this, and that may also be a great new book to continue my tethering to a land that I quickly learned to love.

I’m sharing what images I took. I regret that it didn’t occur to me earlier, to begin to gather more of these images. It wasn’t until I was about to leave Portugal that I realized… “Wait a minute! There’s a story in these tiles.” So, I spent my last day in Lisbon trying to capture every single tile I saw. I realized that it took so many days to see what I had been seeing all along. Remember, though, I was on sensory overload from the minute I arrived; so, focusing on details was my main problem. It’s okay, though. I now know what my next trip will bring… Me living inside of as many tiles as I can possibly grasp. It will happen, and I’ll share. 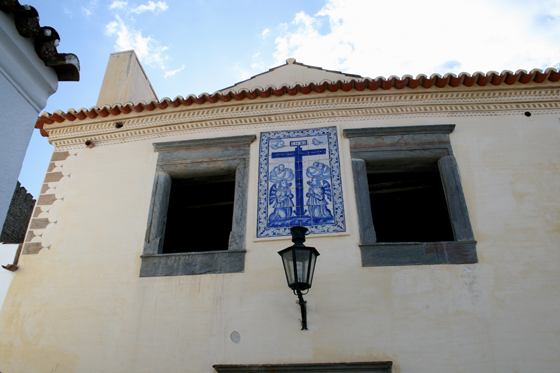 The picture above was taken of a church in Reguengos de Monsaraz, as my hosts and I walked the narrow streets to the Colosseum, and then went to lunch at a family restaurant in this fort village.

This image is of a ceiling at the M’Ar De Ar Hotel Aqueducto in Evora. Notice how tiles in this alcove are of a very special design, and created just for this location as an enhancement. 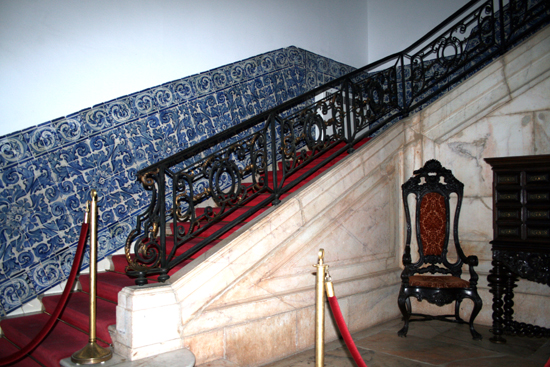 Image above: the entryway of the Pousada Da Rainah Santa Isabel palace in Borba. We slipped in and I shot this before a security person told us the palace is currently closed for renovations. 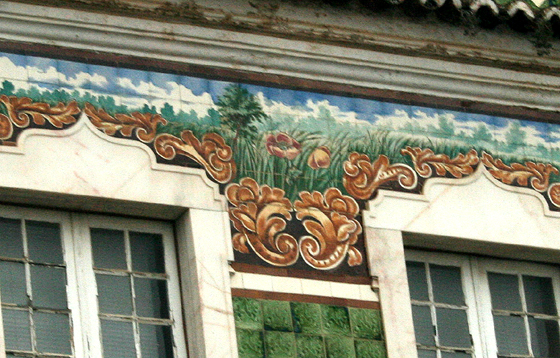 This is an ordinary house mural in Borba, and is just an everyday occurrence for them. I, however, was living in astonishment for this being extraordinary. 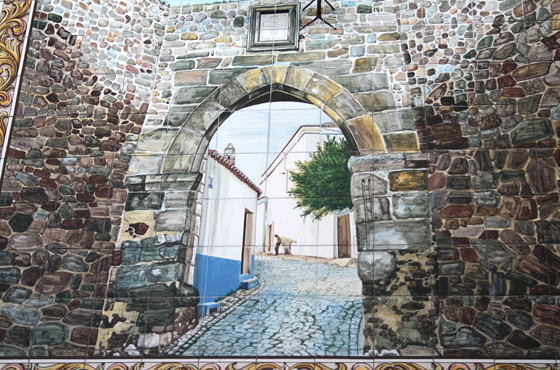 This is one of two wall murals in Adega Coop de Redondo. The first one is a portal that opens into their village, and is also on a label for the winery. 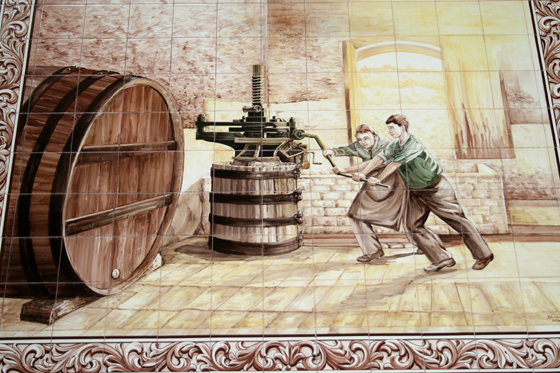 The second mural is a typical scene of wine making of days gone by. 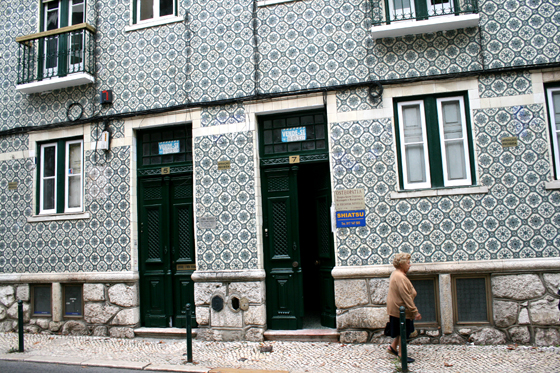 This apartment building – as you can see – is covered in tiles. I took this image while having a few free minutes in Lisbon, and walked around the neighborhood of the hotel. I passed up going to the cork forest, because jet lag had caught up with me and I was just exhausted. 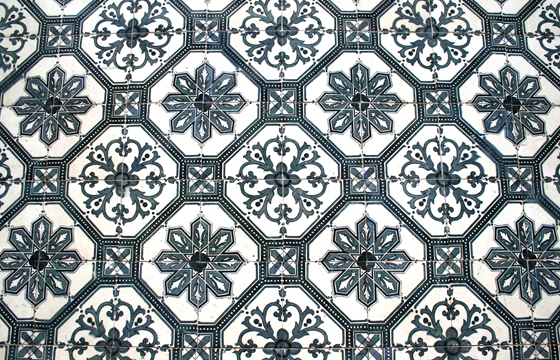 This next image is a closeup of the tiles on the Lisbon apartment above. 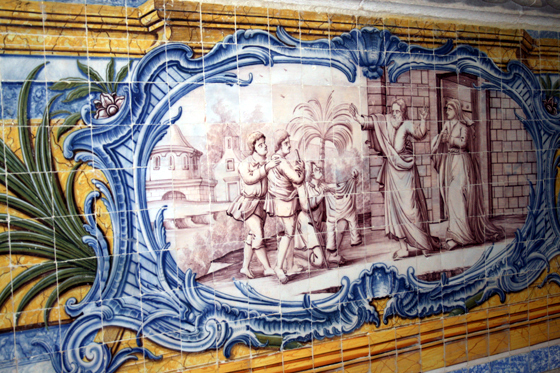 Inside the Mosteiro dos Jerónimos, there is a very large room that has a continuous scene. This is just one image that I captured of one scene. 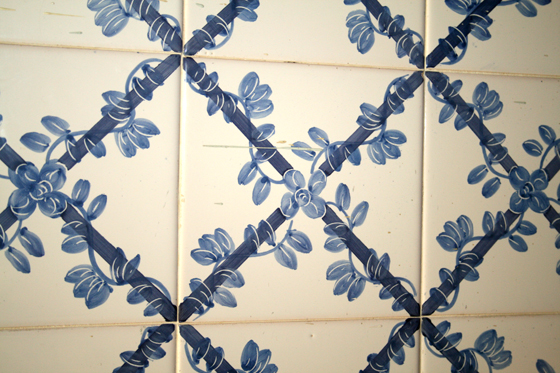 This last one is an image I took inside of a bakery in Lisbon… I could go on, but I won’t for now.

The First Global Village ~ How Portugal Changed the World, by Martin Page