A Little Holiday Cheer on This Merriest of Days

Weekly Holidaze Drawing: Just leave a comment on any wine-blog entry this month, to win gifts this December: 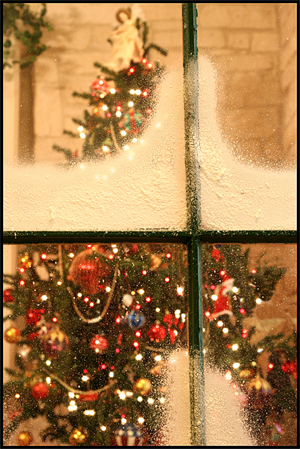 The following story came to me in an Email from my sister. Her name is Merry.

I wondered my whole life about our names, until a few years ago. I was born on December 21, and Merry was born on March 19. I got “Jo” and she got “Merry.” I guess my mother had latent thoughts, as I’m nine years older than Merry.

I stopped wondering about that one, though, the year Merry was living in New York City on “Turdy Turd and Turd.” Say it out loud, and you’ll get it, using that New York accent. Merry could say that and have any cab driver deliver her exactly to her corner apartment. This was back in the 80’s. Today, I’m not so sure she’d easily make it home. The cab drivers aren’t necessarily from Brooklyn anymore, are they? (Maybe I’m wrong about that. It’s been a while since I’ve been in New York, but know it’s changed dramatically.)

Merry was attending the New York Restaurant School, studying with the likes of Giuliano Bugialli, and living with another student chef at the time. Life was very vibrant and exciting.

During one holiday season, just a week before Christmas, she flew me to New York, and gave me a week in the city that I’ll never forget. The city holiday lights and store front windows just took my breath away. We skated at Wollman Rink in Central Park. She took me to the Marriott Marquis’s theater in Times Square to see, “My Gal.” We shopped, ate, drank, and went to Radio City Music Hall to see the Rockette’s Christmas show.

We also went to Port Washington on Long Island, to visit with her friends. One of these friends had the Swiss come to him and say, “We know how to make watches, and you know how to market. Let’s start a watch company, and call it Swatch. What do you think?” (I got a Swatch that Christmas, as did everyone else in my family. Don was a very generous man.)

It was that Christmas that I also got to see my first sailboats decorated with lights, and then a Christmas parade of sailboats with their lights. I learned that some people lived on sailboats year round, docked in a stationary harbor as their neighborhood. I hadn’t had time to think about it before then… I just wasn’t every exposed to a marina, having grown up with summers on Sabattus Lake in Maine. Our boats were tied to our own dock, and we lived in our summer home when the weather was nice.

Merry really put the “Merry” in Merry Christmas… forever more in my world.

Meanwhile, at the time of my birth, we had a Josephine in our family… She was one of my great uncle’s girl friends, and my mother liked the name. It also fit because my parents wanted a boy, and I was to become the neighborhood tom boy. Merry would have never qualified as a tom boy… She was just my little sister who liked to get the rest of us all in trouble, and very girlie cute.

And so, it is with Merry glee that I present a story she forwarded to me, which just made me very merry. Enjoy!

A Christmas Story for people having a bad day:

When four of Santa’s elves got sick, the trainee elves did not produce toys as fast as the regular ones, and Santa began to feel the Pre-Christmas pressure.

Then Mrs Claus told Santa her Mother was coming to visit, which stressed Santa even more.

When he went to harness the reindeer, he found that three of them were about to give birth and two others had jumped the fence and were out, Heaven knows where.

Then when he began to load the sleigh, one of the floorboards cracked, the toy bag fell to the ground and all the toys were scattered.

Frustrated, Santa went in the house for a cup of apple cider and a shot of rum. When he went to the cupboard, he discovered the elves had drank all the cider and hidden the liquor. In his frustration, he accidentally dropped the cider jug, and it broke into hundreds of little glass pieces all over the kitchen floor. He went to get the broom and found the mice had eaten all the straw off the end of the broom.

Just then the doorbell rang, and irritated Santa marched to the door, yanked it open, and there stood a little angel with a great big Christmas tree.

The angel said very cheerfully, ‘Merry Christmas, Santa. Isn’t this a lovely day? I have a beautiful tree for you. Where would you like me to stick it?’

And so began the tradition of the little angel on top of the Christmas tree.

From my house to yours, Merry Christmas!