Something I learned at the European Wine Bloggers Conference is that Lisbon hotels are no better than American hotels when it comes to hosting a group of techies. Connectivity with everyone running around with computers is almost non-existent.

How does this tie into my story about winemaker José Fonseca ~ of  Enoforum Wines? It was at the EWBC that I first met José. I had just spent about 10 minutes trying to find a place where I could plug in my computer – perhaps finding the last available spot in the seminar’s room among the 100 or so other wine bloggers, when my host Delfim Costa found me. He signaled for me to come with him. Panic flooded my mind. “Oh, no,” I thought, “I’ll never find another plug-in space!” Delfim asserted, “I only need you for a moment.” I thought, “Phew!” and went with him, leaving my computer plugged in.

[This image was taken at lunch at the castle in Reguengos de Monsaraz. José is on the left, with my host Delfim Costa being on the right.]

I walked with Delfim into the hotel lobby from the conference room, and standing there was José Fonseca. I was immediately struck by his presence. His posture was impeccable, his presence was regal, and his face shone the wisdom of the ages. This was Enoforum’s winemaker, and one of the most important reasons I had been summoned to Portugal. As I would come to learn over my next 10 days in Portugal, driven by my male colleagues along the way, chivalry is still alive and well in this land of compassionate and highly evolved people… the Portuguese.

As I sensed the importance of José in the future of my learning about the wines from Alentejo, I went back to review José’s biography… There it was, what I had intuitively sensed:

I felt honored to have been introduced to him, because he’s just that kind of man. Delfim told me that José had been one of his university professors, and when it became time to create Enoforum Wines, their lives were reunited. 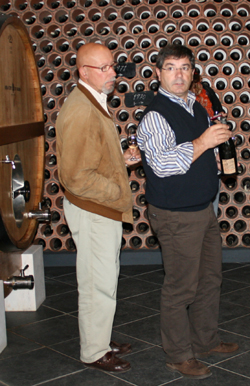 Back to the chivalry thing… This is just an observation from one of the original women who thought women’s rights needed to be advanced, for not only my generation’s  good, but also for the good of our children. [Bear with me, it’s going to come back to José, again, as the men of Portugal have taught me a lot more than just about wine.] So, we burned our bras, let our hair grow, and got to the doors before any guy could get there ahead of us. We just wanted to do everything for ourselves. Women in the US – at that time – wanted full, self sufficiency. We had been Stepford Wives long enough. In so doing, though, we may be responsible for our national common courtesy now becoming a thing of the past. Notice the word “court” being in the word “courtesy.” What has been done in the courteous system of respecting others, has in America become a dwindling mannerism. Courtesy has now become “uncommon,” and now we must bring it all back to a middle ground.

Being in Portugal taught me that it’s an American thing, as my world knows it. (It’s just my own perspectives as an American woman, whose culture includes the 1960s in this country, with my other worldly travels have been to tropical otherlands, so I do have limited, worldly perspective, I admit.)

[This image is the group of us walking toward the top of the fort in Reguengos de Monsaraz, with José always making sure that everything ahead of him was going well and no one got left behind. Taking this image from the rear wasn’t easy.]

So, what I found in Portugal is a land where men (and women) still respect all women, in ways that are completely courteous. We are the mothers of humanity… and they intuitively respect that fact. As I went on all tours of wineries, from one to the next, along with hotels and restaurants (another big part of this learning curve was learning about their foods with their wines) I have no memory of opening any doors for myself. Honestly, I found myself loving the courtesy extended to Gwendolyn – my traveling companion – and me.

Being so far away from the 1960s, I found it so refreshing. It had me slow down long enough to have others treating me kindly, and who can get enough of that in this world? As Delfim would lead Gwendolyn Alley and I into another winery, José was always right there to make sure that the door closed properly behind us. He kept a keen eye on the entire process that we were enjoying. Seats were pulled out, whenever possible, and a respect for our time’s learning curve was given full attention. I was completely struck by the kind of high quality attention, not just the attention, we were given.

As I wrote at the beginning of this week, To Understand Portuguese Wines, One Must First Understand the People.

Winemaker José Fonseca traveled to each winery with ust:

At each winery, we would listen to the company’s stories about how advanced they are and their rigorous standards for accepting local grapes into their cooperatives. Why this is important is that winemaker José Fonseca is responsible for making Enoforum’s wines by working in concert with these other winemakers. It is they who are the source for the wines that Enoforum is now presenting to the world’s markets. These aforementioned brands are the shareholders in Enoforum’s wines, with José being part of the over-all process. To quote the Spanish saying, “Mi casa es su casa;” or, as in this case, “Mi vino es su vino.” It’s all working toward the common good, and getting more great Alentejo wine into the global markets. Right now, under José Fonseca’s guidance, Enoforum wines are in the following countries: Holland, United States (New York, only), Poland, Brazil, Russian Federation, Canada, China, Angola, and Belarus. Delfim is busy opening up new markets all the time, and the wines are experiencing unprecedented growth. It’s only a matter of time before they have more complete distribution in the US, and I’m delighted to be part of that process… as they’re great value wines.

I’ll be keeping you up on every step of the way, because that’s what I do on this blog… Journal my journeys … Who’s bringing them in (as an importer), where to find them locally, and at which events they’ll be poured. You, too, will have the advantage of knowing how great these wines are as value wines. You know how it goes… New kids on the blog have to try harder, and give a lot more than the kids that have built up their creds. This is a very exciting project for me, because I love to see underdogs come along, and eventually find their ability to prosper (e.g., Petite Sirah and Suisun Valley). It’s an exhilarating feeling… Ask any doting parent. It’s the same energy.

Now… the wines that we tasted with José Fonseca, but before I list them, there’s one thing that you must know: These value wines, although they’re priced very moderately – by comparison with California’s Central Valley, for instance – would knock your socks off for the price. The reason for this is that unlike Central Valley wines, these wines have a sense of place. The grapes are grown under the strictest of standards by the adega cooperatives. When they arrive to the wineries, they’re first classified by their tier pricing, depending on their quality. The difference here between California’s Central Valley and Alentejo is like night and day, however. Unlike central valley fruit where fruit is grown on huge farms with no personal care being given to each vine, the lowest tier pricing from the Alentejo is like saying the lowest tier fruit from Napa or Sonoma Counties… That fruit has been carefully farmed and has regional characteristics, being so much better than bulk. There’s no “bulk” mentality in the Alentejo, so their value wines are extreme value wines. That’s what you’ll now be reading about… Alentejo’s extreme value wines, regardless of the prices. According to José Fonseca, “The secret of Alentejo wines lies in the use of the richest, native grape varieties.” I also now know it has a lot to do with the strictest of standards, as well.

This is why in the first six months of 2009, wines sales from the Alentejo equaled all of the wine sales in 2008 alone. Media has brought attention to these wines, and an adoring public is searching them out to find that they are exactly what the media has been saying… “Great wine for the price.”

BTW, in Portugal, a wine that has “Regional” on it is equivalent to “Vin de Pay” from France.  These are their value, table wines… Alentejo’s easy, everyday drinking wines; yet, are great enough to be shared with friends and family. 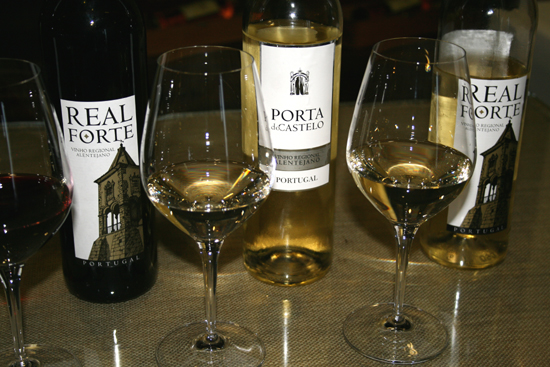 2008 Real Forte Vinho Regional Alentejo, Portugal (white wine): This delicate wine had beautiful lemon, star fruit, and golden delicious apple qualities, with a slight green olive flavor on the  finish. I’d easily just use this one for a house wine, and pair it with chicken or fish dishes. They would just naturally pair well with this wine and any cream sauces that you’d create. $6.00 US

2007 Porta d0 Castelo ~ Vinho Regional ~ Alentejo, Portugal (white wine): A “Castle Door” is a very common sight in Portugal, hence the natural label. White grapefruit, green apple, and Meyer lemons (that aren’t as tart as other lemon varieties) dominated the palate, with a delicate greet tea on the finish. For me, this one would work well with Asian dishes that I love. $5.00

2008 Real Forte Vinho Regional Alentejo, Portugal (red wine): Black fruit… like blackberries… and some blueberry flavors dominated, along with unsweetened dates. This wine had moderate tannins, and would pair nicely with our American cheeseburgers and potato chips, dill pickles included. $6.00 US

2007 Porta d0 Castelo ~ Vinho Regional ~ Alentejo, Portugal (red wine): This delicate red had distinctive plum flavors, reminding me of a Burgundy, more than Bordeaux’s black fruit. Dominant rose petals, like the ones that grow wild along the coast of Maine, were on the finish, as well as a slight cinnamon spice and yellow cherries. $5.00 US

2006 Além ~ Além is a Portuguese word that means “beyond.” It should then come as no surprise that this wine went beyond my expectations, and it did deliver. This one was much more variety driven, and intended for special occasions. The alcohol level on this wine is 14.5 percent. It is a blend of Syrah and Touriga National. Touriga is considered by many to be Portugal’s finest red grape variety, and it’s also low yielding, so wines with this variety will fetch higher prices for the obvious supply-and-demand factors. Flavors of rich black fruit, like cassis and boysenberries, with sandalwood and cassis gracing the finish of this sophisticated wine. Além had a beautifully, Romanesque body to it that lingered on my palate for a goodly amount of time. $18.99 US