Wily Jack Wines ~ Priced to Sell, Each With a Story to Tell

My sister Bonnie and I have an ongoing thing that we’ve been doing for years, besides loving each other like crazy. It’s a “Make My Day” kit. What this is is a creation that began with my thinking about her, and wanting to surprise her with something. I wanted to turn an ordinary day for her into an extraordinary one. I wanted it to be completely out of the blue, and have no relevance to any specific date, time, or holiday … Just a reaching out across the miles, and putting a great smile on her face. Of course, she later reciprocated, and so the “Make My Day” kit was born.

Yesterday, I got a “Make My Day” kit, but it wasn’t from Bon… It was from Wily Jack, a new wine from Diageo Chateau & Estate Wine Company.

As I looked at the package, I couldn’t tell where it was from and so the intrigue began.

Once opened, on the top of the cardboard protecting the three bottles that lay below in the shipper, I spied a branding iron. I picked it up and looked at it, realizing that it’s the silhouette of a cowboy as the image.

I spent some time looking at it, because it’s so cool. There’s always been a cowgirl inside of me, having a cowgirl hat as a kid, and longing for those boots that never came. I now know where to get awesome boots (Santa Fe, New Mexico), but haven’t yet fulfilled that dream. (Maybe another trip into the dessert for some really fancy footwear…)

“Who’s behind this?” I thought to myself. Back to the box… 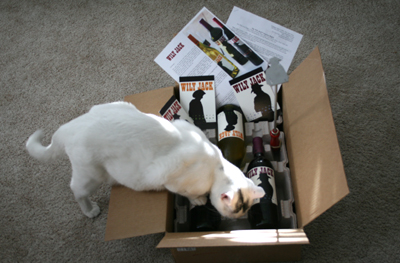 I put the branding iron down (thinking of all the fun steaks in the future), and removed the cardboard. There lay three Wily Jack Wines, recipe cards, a cover letter, and technical data sheets. “Boy,” I thought, “Has this company got its act together.”

I read the story, as I chilled the Chardonnay. Jose and I had a leftover chicken that I had roasted earlier in the week, and Jose had put it onto the stove, as the beginnings of a soup. The aromas were so inviting that the neighborhood stray, whom I never see in the afternoon, had waltzed himself into the house. (I have an open door policy with Big Foot, until I take him to our vet’s for neutering, that is. At that point, he’ll – of course – lose the wanderlust. Meanwhile, Big Foot and I inspected all within the package, with the Chard having being taken off to chill, getting ready for being part of our dinner.)

The materials within the package were well thought out and definitely an attention grabber. It was just something that I had to explore immediately, and leave my workday behind. It was late afternoon, and definitely the right timing.

The legend went straight to my deep inner cowgirl. Each bottle has a story (back label):

CHAPTER 1: 2007 Wily Jack Cabernet Sauvignon (California) ~  The sun’s last hurrah laid long shadows across the barren plain. Wily Jack sat on a weathered outcropping enjoying his new freedom. The city, a distant blur on the horizon, couldn’t reach him here. Tomorrow he would continue west, but tonight he would lie on his back and watch the stars spin tight circles around an unknown point in the infinite sky.

CHAPTER 2: 2008 Wily Jack Chardonnay (California) ~ She studied his face, hoping to find a single clue that would help shape her direction. His penetrating eyes said everything and nothing she needed to know. This was not a time for self-doubt. Her well-honed instincts were rarely wrong, and now they were sure that her full house would win the hand. But her well-honed instincts had never met Wily Jack.

CHAPTER 3: 2007 Wily Jack Zinfandel (California) ~ He let the line drift slowly with the current. The cold morning air froze his fingers to the rod and reel. There was barely enough light for Wily Jack to see the lone steelhead just beyond his reach. There was barely enough light for the lone steelhead to see Wily Jack just beyond his reach. It was a stalemate they both could live with.

As the Chardonnay continued to chill, I decided to finalize the soup. I cut up green onions and celery. I went to the garden and cut fresh parsley (dark green and really firm), and snipped away at my Swiss chard (also really firm), thinking this would be a great complement to the Chardonnay. I returned to soup making, and deboned what was left on the carcass, throwing everything into this simple soup, holding the Swiss chard for just after I turned off the soup (about 10 minutes after I had put in my chicken, veggies, and parsley).

In those ten minutes, I read each recipe card to match a specific wine, prepared by their chef, Chef Joey Altman:

I had time to open the Chardonnay, to taste it before finalizing the soup.

These wines, just for the record are line-priced. That means that each one is $8.00, regardless of which one it is. These are wines that are for simple enjoyment, not for cellaring, but for an immediate purchase for an immediate meal.

The Chardonnay, not too chilled so I could really taste the nuances, proved to be delightful. It’s an easy drinking wine, with immediate flavors that are more tropical than tart (pineapple, banana, and kiwi), and it has a lush palate feel. The nose is reminiscent of apple pie with cinnamon sprinkled on the top… lots of baked juice oozing through the crust, because it was allowed to bake just a bit more… You know those aromas. The finish was crisp, clean, and refreshing.

It paired beautifully with the chicken soup, and my “Make My Day” kit, did just that… It made my day, just when I needed that kind of surprise.

I’ll be having more adventures with the Cab and Zin, just as these wines are intended to be enjoyed.

Wily Jack wines are simply delicious, their story is extremely entertaining, and their value ~ for the quality that they give ~ is extreme. Wily Jack made my day with a little off-the-beaten-path adventure, as they were intended.

I image the Cab and Zin will find their way into more of my own chapters, and then onto this blog. For now, I’m heading into the horizon of this day, dreaming of cowgirl boots, once again.