Been Doon So Long ~ The Wizard Behind the Curtain

One thing I’ve recently learned, if it’s got Randall Grahm’s name on it, you’re in for a treat. You’re also in for a lesson.. Perhaps “lessons” is the better word.

My recent encounter with Randall was previous to his book being released. So previous, in fact, that as I uploaded the ongoing interview that I had had with him (ongoing on for weeks via Email),  my story and his book release were on the exact same day.

During the entire Q&A sessions that we had going back and forth, I didn’t ask the question, (he therefore couldn’t give the answer to me), “Do you have any books that you’ve written?”

And, the answer would have been, “Why, I have one being released any day now!”

It wasn’t until I was getting ready to launch his story that I got wind of his book, from other sources, mind you.

Because of our recent interactions, I received a copy of this autobiography, which is an historical accretion of Randall’s career as a wine maker in the Santa Cruz Mountains. He’s a man who has carved his own eclectic place in California’s viticultural and wine making history. It’s a life about one of those who dared and delivered. Of course, he’s still delivering, so the final chapter of Randall Grahm is yet to be written in this book he’s produced. It gets us from the early beginnings to the present, however, for those of us who have yet been able to put all of his pieces together. To “get” the puzzle, this is an immensely enjoyable must read, that will help you navigate the ride of his lifetime.

I found the book to be very reveling, and a great follow-up to my own interview with him: The Balloon Fairy Meets the Tooth Fairy on September 14, 2009. 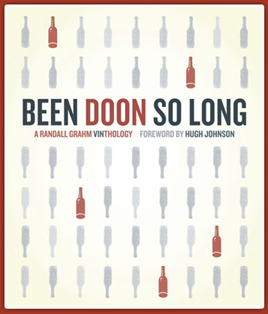 I loved that he believes, “Frank Zappa – patron saint of risk-takers and épateurs of bourgeois sensibility is the angel who continues to watch over both of us” [“us” being Randall and his friend John Locke].  Zappa and I shared the same birthday, and almost identical astrology charts for 12/21. Is it a coincidence that I found this on page 121 (12/21)? It could be a stretch, or not…

So, how did I love the book?

Well I did, first off, because I didn’t have a lot of first-hand knowledge of Randall’s last 50 years, and this book got me (somewhat) swiftly caught up with his life, which was filled with mot remarks and historical accretions. (There are more than a few words in his book that were new to me and inspired some usage, thanks to Randall’s unusually expansive vocabulary. He must have been one of those kids who walked around with a dictionary in his back pocket, or perhaps his mother or dad encouraged a “word of the day” program for him as he was growing up.)

If you’re curious at all about Randall Grahm (and, if you’re not, you should be), this book retraces his life and the writings of that journey, delivering a vinthology for which there is no comparison. There are others who are as eclectic that you should get to know… Carl Doumani and Sean Thackery immediately come to mind… but they’ve not delivered the anthology yet, and Randall has. Randall’s life is revealed in Been Doon So Long as one who wears his heart on his sleeve… and you’re along for the ride, the poetry, the short stories, the drawings and cartoons, the explanation of his labels’ chronology, and his passions put to use… Even his life’s turning point of stepping out of his “Wine Hell” to eventually follow his own heart. It’s a brilliant masterpiece, Zen thing from the master himself.

Randall is a very complex, witty man, and he’s given us all the most intimate of wine making details for his wine professional life. Thank god for the radical spirit that is his own. And, it’s a blessing that he’s part of the American wine industry’s lexicon.

The book even has a glossary, where you’ll learn that “Condom” is a town in the region of Armagnac. Yes, Randall teaches us all many things.