“Best of Show” Awards at the Sonoma Wine Country Weekend

How many ways can you write about something you’ve covered for the last 17 years, without it becoming totally boring… for me, at least, if not also for you. They’re over there, she’s over here, this wine tasted like that (for me, who knows what it would taste like for you?), and they had food… lots of great food (that you can’t have, because you weren’t there). Without a recipe, it’s useless information.

So… I started with an agenda,. I decided I’d look for those idiosyncratic behaviors that I just love to write about. I could  add them to my Road Warrior Survival Guide story. Whenever Road Warrior is on my blog, it turns the day into a reading frenzy. Turns out, I didn’t have to go far for my very first item… A visual, to make the story even more fun.

All of a sudden, I noticed that the place was crawling with people wearing their wine around their necks… Big, bold wine glass necklaces. Grown men and women wearing their wine. For some unknown reason, though, men really outnumber woman with this one. Maybe it’s because women are already wearing their jewelry, and this contraption really clashes. Not sure, but that seems logical…

It amazes me that one minute great big burly men are cheering on their sports heroes in Parthenon-type arenas, and the next day they’re convinced by “free stuff” to wear a wine glass around their necks like it’s tres, tres chic, hands free.

With a world full of stuff headed toward landfills, this item is just about as ridiculous as having two televisions in every room of one’s house. But, there they were, and that’s what was going through my mind, as everyone else was scurrying around to enjoy all the fabulous Sonoma County wines.

After that little interloper experience, off I went with a lighter, more adventurous soul, and decided that I’d rather give “Best Of” awards: 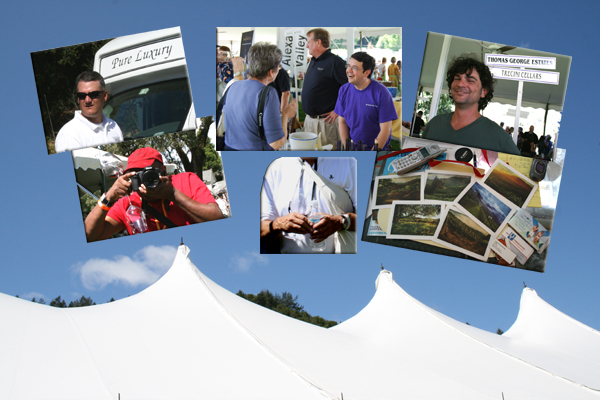