Learning Portuguese Culture and Wines From Afar Through Enoforum

It’s so simple to learn a culture, when you’re right there. That’s how I’ve learned about every wine region I’ve worked with and now enjoy. It’s just so primary and doable. I know to completely understand Portugal and become one with it, a trip is in my future. For now, I’m prepping for it by learning everything that I can through the Internet, books, its people and its wines. I also know that I’ve got to pay serious attention to Catvino, because therein lies a great advocate for the wines of the Iberian Peninsula. So much to do, and I’ve thankfully been given the time. 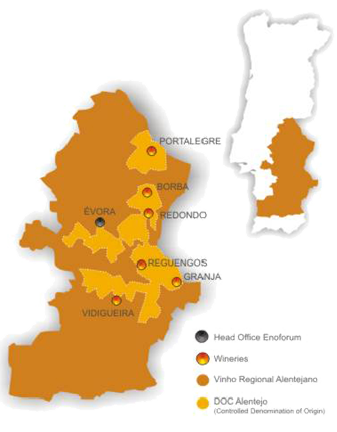 Our new client, Enoforum is based in the pretty town of Évora, which is in the heart of the Alentejo Region. [Unlike the Spanish language that pronounces the letter “j” like an “h,” the Portuguese language pronounces the “j” like the “j” in Jones.]

This is a community that has over 2,000 years of deep historical roots. So much so, in fact, that the United Nations Educational, Scientific and Cultural Organization (UNESCO) has classified Évora as a World Heritage site. Évora sits on the Alentejo undulating plain, with the splendors of its past creating a diverse skyline that reflects its rich history.

From the Phoenicians, Greeks, Romans, and Arabs, many cultures have traveled to and lived in Évora, Portugal. Each one has added to and enriched its culture, creating a people who are well mannered, very cultured and civilized, and who demonstrate great grace. This I’ve learned from people; both my new colleague Delfim Costa of Enoforum and also from the book that Delfim gave to me over the Christmas holiday last year: The First Global Village, How Portugal Changed the World, by Martin Page. 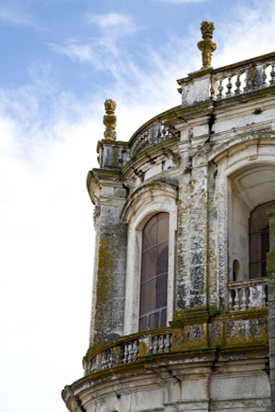 The Romans created the elegant temple, battlements and baths, and the Moorish “Yeborah” influenced the urban network of the Mouraria district. Conquered in the time of King Afonso Henriques, the city captured the imagination of the kings of Portugal. King João II chose it for the wedding of his successor to the daughter of the Catholic Monarchs. One of the most ostentatious celebrations ever seen in the late Middle Ages. King Manuel I established his court in Évora as did King João III.

According to the VisitPortugal.com site, the Alentejo wine route travels through vast vineyards, which stretch as far as the eye can see. Enoforum wines lists 296,523 acres. This a huge portion of the Alentejo region, but then it’s because  “ENOFORUM – Comércio e Exportação de Vinhos, S.A.” is a joint stock company established in July 2004. The six original founders are the six cooperative wineries from Alentejo, in the south of Portugal, that encompass 12.000 hectares (296,523 acres) of vineyards. Yearly production is 60 million litres (5 million cases) of wine. In September 2005, a seventh shareholder joined this group – “PME Investimentos – Sociedade de Investimento, S.A.” 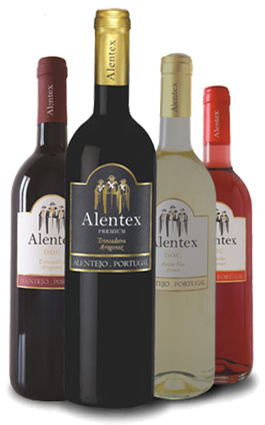 With more than a century of of skilled wine production, these wine companies succeeded in reaching a prominent position in the Portuguese domestic wine market. The grape growers got together and decided to create a wine cooperative, naming it Enoforum. This is a very industrious endeavor, because it meant that this group was ready to prove that their fruit was world class. In order to prove just that, the consortium knew that it must hit the world stage. Their main focus, since the beginning, was to reach out to an international market. To that end, the wines are now placed in Holland, Poland, Brazil, the Russian Federation, Canada, China, Estonia, and Belarus. They’re currently in the market for a US importer, and I’m going to do my best to help with that one. This is going to be part of an enormous learning curve for me. I’m really eager to embark upon this a skill developing process, and will learn firsthand the joys and challenges that will lead to success.

I’ve said more than once, the wine business for me is a continually unfolding lotus. I completely understand the passion of the new, younger wine writers and bloggers who have started their journey. They’re where I was 17 years ago… eyes wide open and so many vistas ahead. This is one path where it leads ~ into the international wine market. Some of them will follow, some will find other paths. This is just one person’s journey, and “let’s see where it goes” is all I’m thinking at this point in time. 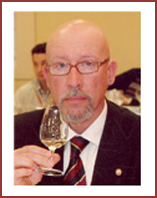 Enoforum’s wine maker is José Fonseca. According to José,

“Alentejo wines are unique and have an exceptional, distinctive quality, that comes from the use and combination of the rich native grape varieties. This is an important inheritance for the production of wines based on the sophisticated and demanding art of blending, which this region masters to perfection. The Alentejo appellation is characterized by hot, dry summers. This combination offers excellent conditions of maturation. The wines are made from deeply colored grapes with high sugar levels, providing good alcohol content, full bodied fruity flavors, and intense color. Young wines are quite soft, and have a great balanced acidity. These are modern wines, that are very pleasant to the palate, and the regional grape varieties give them an exclusive taste and aroma.”

Wine writers have written the following:

Eric Asimov of the New York Times: “Today, Portugal is a source of distinctive wines. More than anything, these wines struck me as honest. They do not try to imitate flavors and styles that are popular elsewhere.”

Jancis Robinson: “This is certainly one of the most promising wine-growing regions in the world.”

The Wine Anorak online Magazine: Wineanorak.com: “Because many of the estates are fairly large and the climate is so reliable, economies of scale mean that Alentejo wines can combine quality with affordability, which is more of a challenge in Portugal’s more northerly regions.”