Appellation America Goes Subscription ~ I Hope People Get it 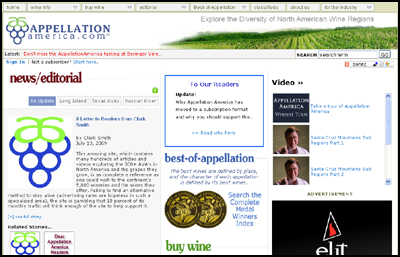 An article that I read entitled The Internet devalues everything it touches, written by Tom Foremski, stuck a serious chord. Tom wrote about the Internet devaluing so many professions that I hadn’t even thought about many of them, but became aware of many more than I had considered. (When we’re personally impacted, we tend to become acutely aware a whole lot quicker.)

I hadn’t thought about many of them, including my own PR profession. Because my field is so specialized to the wine industry, I thought I was relatively safe. With the advances of the digital age, however, I now believe what Tom has written. I just have to continue to grow within my profession, or I, too, like print media will have a very rough go of staying alive and well in PR.

The list below is a quick snapshot of Tom Foremski’s story. I’ve not listed all professions from the story, so I highly recommend that you find time for segueing over for a full read. It’s really stimulating, really well written, and I guarantee you’ll learn something:

– The Internet enables the outsourcing of knowledge workers. High salaried workers in many professions are losing their jobs to workers in foreign countries where the costs of doing business are far lower.

– The value of music has dramatically fallen. I used to pay nearly $20 for a CD with about 10 songs or about $2 per song. Now I use Lala.com and pay just 10 cents per song for lifetime streaming rights.

– Newspaper and magazines are available online for free. I used to subscribe to daily newspapers and many magazines. I don’t anymore yet I get nearly the same access to those products for nearly free – just the cost of my ISP.

– Journalism jobs are fewer and pay less because there is more competition, there are more people willing to do the work for less money.

– Magazines staffed by just one or just a few people can pull in the readership of what used to be a 30 plus person magazine editing and production team.

And there it is… journalism and magazines completely being impacted by today’s IT. This is where Appellation America is placed… A journalistic + magazine (two counts) that cannot sustain itself (as free, who can?), and yet provides such a comprehensive resource for the wine industry. The conundrum is that it cannot afford to stay alive without some form of compensation; and we can’t afford to let it go, because the site is so content rich… and yet we’ve become addicted to expecting information on the Internet to be free for the taking.

If we have a research project, the first place to go these days is to the Internet. Who schedules a trip to the library anymore? Who even remembers how to use the Dewey Decimal System? I’d need a refresher course, which – of course – I’d find on the Internet.

And yet, for Appellation America to stay alive it needs the support of a system for which it’s based, but I’m not sure that that system has an appreciation for the services that AA provides. People will take what they can get that’s free, and just move on. I’m really hoping that the wine industry finds a way to support and sustain this valuable resource.

Well, I’d certainly hope so, on that last question. We all know that nothing is free in this lifetime; so the quicker we adapt to “You’ve got to pay to play,” the more enriched all of our lives will be. But then, we all know that life’s not fair, too.

If Appellation America doesn’t make it, it’s only because it’s ahead of its time. Enjoy “free” on the Internet for as long as you can. Eventually, much of what’s on the Internet – that which is content rich – will demand some fee, because who can afford to be a volunteer forever? It doesn’t pay the rent or fill the refrigerator.

If you’re one of those marketing people who needs third party endorsements in order to grow your brand, consider opening up your purse strings. I pay for a lot of information (subscriptions to magazines and on-line newspapers) in order to know who’s saying what about brands I represent. I don’t care if it’s on line or off line. Pay to Play is what it’s all about, or – perhaps better put – supporting those who support me is just common courtesy and natural reciprocity.