The Silver Lining at Viader is Delia, a True Woman’s Woman

I once wrote of Delia Viader, Her Heart is in the vineyards; her soul is in the bottle!

Nothing has changed along those lines, just the fabric of her story has become more rich and vibrant with additional experiences, since we last met two and a half years ago.

Recently, I got the urge to focus on a woman in the wine business… who knows why, I just did. I always just follow my instincts; because when I do, the reason is always shortly revealed. So, it was to Delia that I went looking for answers. I E-mailed her,

Delia, Time for an update of your story. I’d like to really focus this one in on a very successful woman in the wine business (you)… Challenges that you’ve met, joys that you’ve experienced, and how everything is currently go for you with the seasons, with your brand, and what the future will hold – as if anyone knows that!

For the first time in 19 years, I will not be going to Bordeaux for VINEXPO. I am just coming out of a great event I do with RBC (Royal Bank of Canada) corporate wealth management group, and their fantastic analyst Janet Engels from Harvard. This time it was at the Montage Hotel in Beverly Hills…fantastic people – all women leaders ready to show the world how it’s done.

This was exactly what my intuition had picked up on, and a date was set to meet.

The following is our time spent together, just chatting, with Delia filling in the blanks for my Woman’s Woman focus. 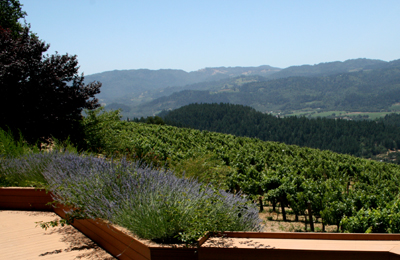 As slight in stature as Delia is, she stands regal in appearance. With her signature, classic pearl necklace adorning her slender neck and her confident smile as a welcoming vision, we again meet. My first visit to Viader was a couple of years ago, and the time spent with Delia Viader never left my mind. I wrote of her, Her Heart is in the Vineyards, Her Soul is in the Bottle. Some people just leave a very lasting impression, and one doesn’t have to spend more than a few minutes with certain people to have this happen. Delia is just one of those people.

I believe she’s a woman’s woman, because she’s a citizen of the world. Raised by a father who was a diplomat, she lived and was educated around the world. This doesn’t allow for someone to become filled with dogma; rather, someone with her life experiences becomes tolerant of others’ differences and sees those lines of differentiation as something to be celebrated. There’s also no guarantee that someone who moves around the world this way will be as gracious as Delia. It’s not a given. But for Delia, it’s her calling, and it’s quite evident as she beings to unfold in the interview process. 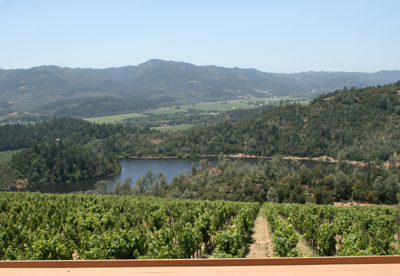 Arriving at Viader, Delia took me to her home, so we could have quiet time together away from her busy office. It was like reuniting with an old friend. The vision from the front of her home overlooks a reservoir below, which spreads forward into Napa Valley. From the reservoir, moving forward is the Silverado Trail, then forward to Route 128, and up the Mayacamas Mountain Range. I asked if she was above the fog line. I suspected she was… And, yes, very much so.

She brought out a frame that’s separated into three smaller frames. The color was dominant blue. In each frame was an image of fog blanketing the valley below, in different carnations of soupy, swirling moisture. The redwood forest of the Mayacamas is enveloping the fog, keeping it well contained. Then, up in the right hand corner, shines the morning moon… It was a blue moon moment, and very beautiful art to enjoy. 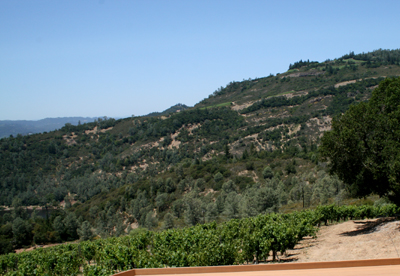 Before arriving at Delia’s, I reviewed the recent story about her in Quarterly Review of Wines, now celebrating their 33rd year of publishing. A most exceptional wine magazine based in Winchester, Massachusetts, it’s well known for covering prominent wine leaders with excellent profiles. Two amazing women are in the Summer 2009 issue that I know: Michaela Rodeno (formerly of St. Supery) and Delia Viader. Delia’s story is entitled “Queen of the Hill,” and is written by Yvonne Michie Horn. The story begins, “It was 1984 and the land was there, 92 acres on the rugged slopes of Napa Valley’s Howell Mountain…” I did the math: 2009 – 1984 = 25 years. This is Delia’s silver anniversary of this land being purchase by her father and then turned over to her. Delia had a vision and presented to her father a provocative enough business plan that would guarantee her future as a successful vintner of the world, based on Howell Mountain.

What’s below is the beginning of a question and answer that we did together.

[Q]  It’s now been 25 years since the land was purchased for what has become Viader, what’s that journey been like?

[A]  I have to break it down by decades. The first 10 years, and the second 10 years. The first were the most exciting. It was a new thing. It’s easier to be new. I noticed a big change in the second decade. Even finding a name for the wine in the first decade took two years. I had wine in the bottle, I had the label designed, but I had no name for the brand. (She chuckles.) At that time, you had to think marketing. It had to be catchy, and expression of terroir.

The second decade became a flurry of business activity. And, during that time came the evolution to the marketplace to reinvent oneself. Everyone wanted wine with their own name. Without a wine with your name on the bottle, you were nobody. It wasn’t just about the romance in communion with the bees, the sun, and the moon. Many people felt that they’d “made it,” and wanted to retire to make great wine. Napa Valley was finally getting recognition abroad. California was now represented in every country, with everyone wanting to know more about California wines… in the UK, Germany, Switzerland with publications. Everyone wanted to know about American made wines.

California wine was a fashion statement in Germany. It was the new doll of marketing. It was very easy to present my wine in Germany and Switzerland, and it became an instant success. I was competing with the world and doing well. I wanted Viader to show equal standing with the rest of the world.

[Q]  “Viader Daring” is a quote from QRW’s story. Can you define what Yvonne Michie Horn had in mind when she referred to you this way? I know it’s hard to get inside someone else’s mind, but you might have some thoughts.

[A]  You have to be daring, not a shy pansy. I don’t have to change my personality in order to be who I am. In your actions that’s how you get your authority. I don’t have to prove anything or be overly assertive. I am fine. I find lies an enormous disappointment. If there’s a certain time or a certain way that something’s gone wrong, just don’t lie to me. I understand that people make mistakes. People need to be accountable; own up to it, and then fix it.

When the war was declared, when politics entered the mind of the European buyers, and they felt they couldn’t put American wine in their cellars, all I could think was, “I didn’t make Freedom Fries” the market changed, for the worse. Back then not only did I have to deal with the economy, but I had to deal with politics, too. There were too many variable that were completely beyond wine making . On top of that, the Swiss got a cheese and chocolate tax, and they just refused to put American wines on their wine lists.

Tomorrow, the rest of the interview continues…