The World of Pinot Noir was an extraordinary event, and continues to linger as a great memory highlight. The location is perpetually hosted at The Cliffs Resort, dramatically situated 100 feet above the Pacific Ocean in Shell Beach, California. The views were gorgeously coastal against rich blue skies with bright white clouds and salty Pacific vistas. Life at the WOPN was truly living on the edge of something very magical.

The event not only offered superlative tasting events, but it also had a comprehensive array of educational seminars. It truly was the World of Pinot being offered for three consecutive days. From some of the Friday seminars: 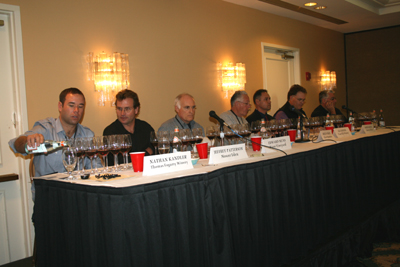 This seminar was a real eye-opener, for a lot of different reasons:

Patrick Comiskey, West Coast Editor of Wine & Spirits Magazine, moderator of this panel, and it was made up of the following people:

Patrick Comiskey’s introduction into the Pinot world was followed by each panel member. It was fascinating to hear each person talk about his own winery and his wines, most especially during the discussions on the history of the Santa Cruz Mountains as an AVA region of very distinct character, and Pinot Noir wine making in this region. 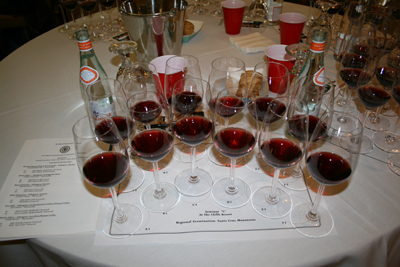 Jeffrey Patterson gave a comprehensive, historical perspective of Pinot Noir in the Santa Cruz Mountains. He discussed Paul Masson, and how in the late 1800’s he brought cuttings from Burgundy (perhaps by putting them in potatoes) to California. This was where he met Charles Lefranc, an immigrant from France who had expanded viticulture that was introduced into the Santa Clara Valley by the Catholic missionaries. In the 1890s, Masson shifted part of his production to the Santa Cruz Mountains above Saratoga, at his mountaintop ranched called “La Cresta,” overlooking the Santa Clara Valley. In 1936, Masson sold his winery to Martin Ray. According to Patterson, in the 1940s, high prices and low production brought in partners. At this point, Patterson then referred to Dr. Bruce in the audience, before he began to talk about his winery, wine making techniques, and tasting his two Pinots, a 2006 and a 2007 Mount Eden Estate.

Winemaker Jerold O’Brien talked about how all winemakers in the Santa Cruz Mountains are mavericks. He mentioned that people who live on the valley floor have a completely different perspective. The Santa Cruz Mountain mavericks have very independent feelings; which means that they sometimes don’t give into what the public wants, and profits really aren’t their primary interest. O’Brien singled out his three original Santa Cruz Mountain Mavericks

Then the floor was open for comments, of which there were many.

When it was all said and done, the panel was an amazing draw, providing a wealth of insight for someone like me, who has had very little exposure to the Santa Cruz Mountains AVA. Regionality – for me – is great perspective, especially when it’s combined with the talents and flavors being crafted by each panel member.