Some of My Favorite Knock-Your-Socks-Off Dry Creek Zins

From the Zin Zone in Sonoma County/Healdsburg, CA;

Bradford Mountain – Imagine standing high atop Bradford Mountain, one of nature’s geographical boundaries for Dry Creek Valley. It separates the basin from the expanse of land stretching westward 20 miles to the Pacific Ocean. You’re visiting Bill and Sally Hambrecht at Wine Creek Ranch, overlooking a 100 year-old Zinfandel field-blend. Sally explains the creek ran red during prohibition when farmers were forced to dump wine. Your passionate Zinfandel heart plummets as you realize that was Zin running down the mountainside. Whatever reached the valley floor was gone, but not forgotten. This is where Zin begins in Dry Creek Valley.

Brief Valley Geography – The valley is about 16 miles long and one mile wide, having the most dense concentration of “old vine” Zin in the world. There are 10,000 acres of land in Dry Creek; 5,500 acres are planted with vines which are parceled out in slightly over 200 vineyard properties. Zinfandel contributes 28 percent of Dry Creek’s acreage. The flavors of this grape are fruit-forward, with plenty of backbone and structure provided from diverse soil; a mixture of gravel, small stones, clay, and loam in varying degrees and in varying locations. Dry Creek experiences warm days, with a climate tempered by the Pacific’s early morning fog.

Brief Valley History & the Gallo Family – In 1870, French immigrants found their way into the valley; closely followed by Italian pioneers, discovering a land recalling their native Piedmont and Tuscany. Names like Chiotti, Gaddini, Cappelli, Pieroni, Lencioni, and Stefani clearly express the choice for early grape varieties. Winery expansion in the valley continued to 1919 with 16 operating wineries. In the 1920’s, the United States experienced Prohibition; miraculously Zinfandel and two wineries survived (Pedroncelli and Frei Brothers). After Prohibition, the valley began to slowly fill with wineries again. During the 70’s, a revival began in Dry Creek led by Bostonian Dave Stare, astute enough to establish “Dry Creek Vineyard.”

Having an already existing relationship with the Frei Brothers, the Gallo family realized the importance of this region, and in 1977 purchased the Frei Ranch. Historically, one of the two wineries in Dry Creek Valley to survive Prohibition, the Frei Ranch was one of the first planted to Zinfandel in 1884. According Gina Gallo from Gallo of Sonoma, “By 1883, the valley had 54 separate vineyards with 883 acres, more than half planted to Zinfandel. In the 1890’s, Italian immigrants came to Dry Creek bringing their taste for rich, full-style dry red wine. Zinfandel was commonly used in this traditional wine, and was widely planted here. My family started doing business with the Frei family in 1934, then when the Frei family retired in 1977, we bought the Frei Vineyards and Winery. That investment’s our family’s commitment to the history and future of Dry Creek Valley.”

Today, Gallo joins names like Forchini, Pedroncelli, Rafanelli, and Teldeschi, echoing that past. Some of the original varieties planted here were Carignane, Sirah, and Zinfandel. Today Dry Creek Valley produces about 78,000 cases of wine; the dominant varietal is Zinfandel.

Dry Creek “Hillside” Zin Grapes – Mountainside grapes are like Maine blueberries… tiny and bursting with flavor. The “God of Flavor” only gives so much zest to a grape. The more that grape fills with water, the more flavor’s diluted. Mountain grapes aren’t irrigated like valley floor grapes; consequently, grapes grown on a mountainside are the most jammy, peppery expressions Zin brings to our palates.

Dry Creek “Valley” Zin Grapes & the Stare Family – Coming down from Bradford Mountain moving onto the valley floor, the soil is extremely complex from one end of the valley to the other, reflecting geological activity of ancient times. It shifts its components from one side of a vineyard to the other. For example, settled on the valley floor in the 1970’s, Dry Creek Vineyard has always been owned and operated by the Dave Stare family. His daughter Kim Stare-Wallace, and her husband Don Wallace have joined Dave Stare in the last ten years.

With sail boats adorning their labels (taking us all back to Boston and the influence that the Charles River had on Dave during his M.I.T. days), Dave’s love for the United States’s eastern culture has totally collided with his love of western culture. All members of this family are passionate about their operation. Walking the vineyards with Don Wallace, one experiences the warmth, commitment, and intrinsic elements that make this family enthusiastic. Don is quick to point out that as the soil shifts in components from one spot to the next, so do the flavors of the grapes, and ultimately the flavors of the wine. The soil at the winery is mostly white ash, suggesting nearby Bradford Mountain’s volcanic activity spewed forth onto this land. According to Don Wallace,

“Our land is pre-Prohibition viticulture. Four Davis clones are planted at three different sites. We went through a nine year process to find ‘absolute terroir.’ The first crop, and third leaf, was a classic Zin. It took eight years to settle into its personality. It was real bright and so exciting! New winemakers are very innovative. Californians tend to rise from the status quo. We’re anarchists who keep exploring all we can. Status quo’s never really good enough. We have more guts than a slaughter house!”

Tasting through Dry Creek Vineyard’ Zins is substantial. All of them talk to you, but the most audible and scrumptious on an autumn day is the 1999 Late Harvest Zinfandel. It looks like ruby slippers, smells like candy apples, and tastes like Grandma’s sweet jam. Dangerous! 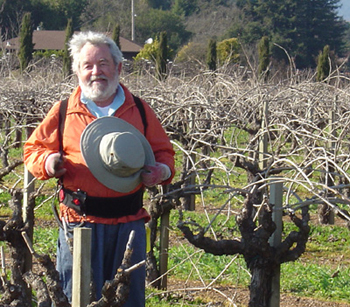 An Impassioned Farmer, Maple Vineyards – In the words of William Shakespeare, “It’s a passion put to use…” the people who tend their vines, much like shepherds who tend their flocks. Just up the valley, on the corner of Lytton Springs Road (where so many famous Zins reign), Maple Vineyards’ Tom and Tina Maple are two of the most passionate Zinfandel growers in the valley. Tom’s mentor was Bill Smith, a Native American, who passed along viticultural traditions to the Maples.

[This image of Tom Maple was borrowed from his Website.] Tom’s impassioned exuberance, explaining that he sees each of his 15,000 vines at least three to four times a year, makes one realize he’s intimately married to these plants. He tends to them in good times and bad, through sickness and health. The Maples have made a life’s commitment to their passion, so connected to their soil. Performing practices that sacrifice crop, only allowing a scant amount of clusters to survive, they bring in their harvest.

It’s an experience that can’t fully be described: Going into Maples’ wine cellar and taste from each of their two barrels of “home-grown” Zin. Wine writer Bob Johnson, in the Northern California Bohemian, once wrote, “In a perfect world, just as all maple syrup should come from Vermont, all Zinfandel should come from the Maple Vineyards.” One wine called “Twisted Oak Block,” which is a story unto itself, comes from eight year old vines, but is so voluptuous that you have to check to make sure you still have enamel on your teeth before you dare smile. The Maples’ Hacienda Block, 68-year old vines, has uniquely different jammy flavors, and yet both wines come from this one remarkable vineyard property.

An Impassioned Winemaker & Bradford Mountain Winery – Winemaker Richard Mansfield was fervent about his wine, explaining his efforts as “Gonzo.” It’s worth quoting Richard’s “Raison d’etre for the winemaker,” as he captures the soul of so many winemakers.

“When the waters abated and the arc came aground, one of the first tasks which Noah set himself to accomplish was the planting of a vineyard. And then it states he was drunk. I too have been drunk. Drunk with joy when the young grape leaves unfurl from their winter sleep. Drunk with exhaustion after months of harvest. Drunk with wild abandon when new ideas for quality emerge from random musings. Yes, but actually drunk on the wine itself… Never. For wine, of all the fermented beverages is one of moderation. Wine is the beverage of a meal, of occasion, of weddings, of births, of christening, of circumcising. Wine is the beverage of civility and of civilization. No other drink we have matches wine as a ritual beverage, as an integral part of western culture. ‘This is my blood…’ spoke Jesus and thus elevated wine to the sacred.

“To misquote Nietzsche, I make wine, therefore I am. It is all I have ever done and desired to be. As a young lad I visited a winery at the tender age of fourteen. Immediate captivation, immediate entrancement. Life’s path chosen. The sacred drum sounded…. Wore the saffron robes of an acolyte until fate and fortune smiled and the vineyard at Bradford Mountain received me as winemaker.”

Wineries outside the “Valley” who purchase the fruit – Owners are smart enough to understand the importance of the fruit grow there… names we all recognize, like Gary Farrell, Kendall-Jackson, Chateau Souverain, Armida, Ravenswood, Trentadue, and Turley Cellars (labels a Bradford Mountain Zin from the Grist Vineyard), to name a few.

Gary Farrell Winery – is the primary purchaser of Maple Vineyard grapes. Tom Maple mentioned the same exact word that was expressed by my friend Denise Sanders, when she was working there… “Meticulous.” Both the Maples and Gary Farrell wines are thorough. This is why the union is so successful. The winery, located in Russian River Valley, is close to the Burgundian style grapes that have made Gary Farrell so famous (Pinot Noir and Chardonnay) is a testament to exactitude. Every aspect is understated elegance, and the environment makes one realize, to work here is to uphold the standards of excellence. Gary Farrell’s Zins are hard to come by.

Kendall Jackson Wine Estates – Jess Jackson has had this game figured out for a while. Now one of the most prominent men in the industry, Jess Jackson produces a “Great Estates 1999 Dry Creek Zinfandel” that will curl your toes. Second-generation viticulturist Hector Bedolla, overseeing K-J’s vineyards, best explains the diverse reasons for flavors in the soil:

“The most fantastic Zins come from a little ridge between the Lytton Springs Road and Highway 101. they’re intensely flavorful. Meanwhile, soils from the valley floor are very different from soils along the gentle hills. Soil in the valley is volcanic in origin. It’s alluvial from mud slides. The red that’s in the mountain soil is from iron oxide, and it’s as good as gold in a farmer’s pocket. The characteristic of Dry Creek soil that’s most fascinating is its’ warmth.”

One is left to wonder if the heat and iron oxide from the soils are what make Zins so intensely flavorful here. This Zin overview doesn’t even scratch the surface of the Zin Zone! So much to write, so little space. Many wonderful books are devoted to Dry Creek Valley. Perhaps this begins your thirst for more knowledge, at best; and your thirst for a glass of Dry Creek Zin, at least!