I live in lovely wine country, where everyone outside of wine country thinks of it as this romantic getaway.

For me, it’s day-to-day, dealing with all of the realities of life, with an occasional field trip that leaves me refreshed, too.

In the 1970’s, I swore off aerosol cans, wondering what impact I’d have, if any.  When I think back over how many years it’s been, and how many cans I haven’t purchased, I’m thrilled that I saw the light when I did. Yes, I displaced workers, all of whom have hopefully found something else more meaningful to do with their lives, and the earth’s better for it all.

I’m currently setting the agenda for the next Petite Sirah Symposium, and thinking “green.” That said, I just got feedback from one grower (who also sells chemicals related to viticulture), who just referred to a preeminent, green viticulturist a “crackpot,” [paraphrasing] telling me to not bring him back, again. This judgment came from his listening and evaluating the green vintner at an earlier symposium. I only had a really quick moment of being torn about not going there again. “Should I avoid the topic of green for those who aren’t believers yet?” I thought. “Nah!” I quickly recovered from my momentary insanity.

I just watched Jean-Michel Cousteau and the Ocean Adventures Team, while they explored the human connection to Beluga and Orca Whales, an Emmy-nominated, HD Multi-media special on PBS called, “Sea Ghosts.” What was revealed was shocking to me, and that’s that the small remaining population of beluga whales (called the Canary Whales, because their sounds sound just like canary birds) may be the canary in the coal mine; except in this case, it’s the canary in the ocean. Regardless of trying to return their numbers to an increased population, young whales are dying of cancer. This cancer is a result of humanly constructed chemicals entering the waterways, which then enter the bodies of all fish… and the youngest beluga whales are dying of cancer. (I’m thankful that I don’t enjoy the flavor of fish.) These whales are dying in the Arctic Circle; however, the chemicals entered the ocean at locations thousands of miles away.

Cousteau demonstrated that what’s happening to our planet, as regards pollution, is very destructive to all nature (including human nature), because we’re all interdependent. He and his team visited frigid Arctic waters to view first-hand how beluga whales – whose Cook Inlet population were added to the list of endangered species in October 2008 – are now being protected in some places by the indigenous tribes who once hunted them nearly to extinction. And, it was the tribes themselves who understand the importance of protecting these whales. They’re sacrificing their own needs over the need to keep these whales as a part of nature’s balance on our planet. (I celebrate these brilliant natives on this Earth Day!)

I’ve created my own neighborhood, environmental study with the thoughtless behavior of children. There is a school across the street from where I live, and I’m in a constant battle with the kids and the candy wrappers that they throw on my lawn. As a result, I decided to show them what one small piece of litter looks like after a period of a few months. This project ran from last August, when they reentered school for the school year, to this past weekend, when I created my demonstrative artwork for them.

I’ve also included on this poster a slot where I’ve put the animated film WALL*E… I created my own WALL*E poster, which I trust the principal will be putting up somewhere on a WALL where the kids can see it. Teachers will all be allowed to share the WALL*E film with their students… And, perhaps just one child will become an environmental green leader.

So, if you think wine country is all sugar and spice and everything nice, think again. There’s as much pollution here as any other place…If not more so, because of all the chemical spraying that goes on to create a vineyard sans green methods, which then runs off into the rivers, and subsequently off to the seas.. These green methods are just as easy to adopt, BTW. I’ve also been gardening and composting since the 1970s.

As my artwork reminds the kids, “Give a Hoot! Don’t Pollute,” and Happy Earth Day…

How are you celebrating? 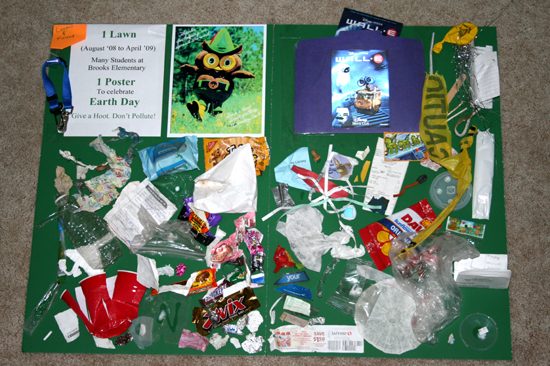