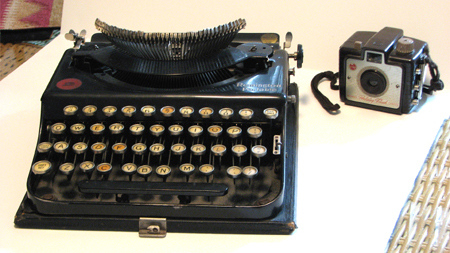 This is my 500th Wine-blog submission… About 50 of the entries have been from others who are talented and I’ve given them space. The other 450 have come from my heart and soul, with no monetary compensation, just a passion to share wine business stories.

As I write this entry, I can’t help but reflect on how the younger demographic of bloggers have held fast to the concept that print media is in market decline, going much the same way of oil lamps, typewriters, and my Brownie camera.

Last month I heard a rumor that Gourmet Magazine was going to be stopping it’s print version and just maintain its on-line presence. I thought of Gerald Asher who writes their wine recommendations.

The San Francisco Chronicle is talking about closing its doors.

I have to admit that I thought this was going to take a lot longer than it seems to be taking. Just reading Catherine Tsai‘s story, the “Rocky Mountain News publishes final edition” delivered by Mobile News Network, I have to admit that the decline of print media is happening a lot faster than I would have ever imagined. Catherine wrote, “Four owners of 33 U.S. daily newspapers have sought Chapter 11 bankruptcy protection in the past 2 1/2 months. A number of other newspapers are up for sale.” This forced me to think of Ben Weinberg, who writes RMN’s wine column.

Declining ad sales for newspapers and magazines is no secret. It may well be that print media is rapidly headed toward not being as relevant as in the past sooner rather than later. Certainly, it will help our “green” efforts.

I don’t read newspapers anymore, but go on line first thing in the morning, that same way my parents sat with a paper every morning for all of their lives.

As a wine publicist, I interface with a lot of wine writers. Having been in the wine business for 17 years, I’ve watched a lot of careers. Many people I know have hit the glass ceiling of success; namely, they peak in success as defined by their papers. That success is a tremendous following – people who’ve purchased the paper in order to read their wine recommendations, but the paper gives them a pick slip, regardless of what they’ve done for the paper. The paper’s next step is to either hire someone just out of college, who’s willing to work for much less, or they find a syndicated feed.

Many wine writers will tell you – behind closed doors – this is his/her scenario.

So, as we face newspapers and magazines going out of business, where will all of these writers go? I can answer that… It’s not a mystery. The Internet.

How’ll they be compensated? Ah… there’s the mystery, yet to be revealed in any substantive way. I dare think, though, it’ll take time to get the same kind of compensation for writing on the Internet than one earned with print media (average is about $1 a word). Right now my word count is exactly 500 words (for my 500th blog entry). So this is worth $500? Yeah… right.