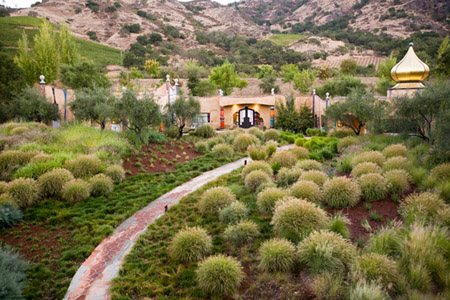 [The above image is one that I have borrowed from the Quixote Winery Website. When I was there, I didn’t have this elevation advantage that allows for you to see Quixote’s completely unique place in space.]

Although proprietor Carl Doumani is a wine producer, he’s the first to admit that he’s not a winemaker. This declaration continues to pop up when I’ve talked to him about his producing wine. He wants me to be very careful that he’s never perceived as the winemaker.  I understand that and am very careful with my semantics about Carl.

I first came across this way of describing Carl, when I asked him if he’d be a discussion leader for the First Petite Sirah Symposium hosted by Foppiano Vineyards. He told me that he’d do it, but he’d have to bring his winemaker, because he’s not a winemaker… Heavy emphasis on the not.

I was just reminded of this again with my blog post of January 28, 2009 (Quixote Winery, Where Carl Doumani Tilts at Windmills… and So Much More). A total fan of Petite Sirah, Loweel of The PSychos’ Path created Carpe Diaz, where he created something of the “Latest Hits of Jo Diaz… all things Petite.” One of his hits was, “A nice article on PS Godfather Carl Doumani, currently of Quixote (which makes both the Quixote and Panza labels).” As soon as Carl knew about this mention, he reminded me, “I am not a winemaker. I did (and do) work with the winemakers to maintain a style that was developed by Lee Stewart in 1972-1973 and 1974. Any improvements in the wine quality were because of their intelligence, not mine.” I felt it was important to reassure Carl that this was in reference to his being the producer of the brand, not the producer of the wine.

I don’t see his reminders as anything negative; rather, I’ve come to learn that he respectfully recognizes talent, and gives it a platform. Carl never, under any circumstance, wants to be considered the person who has created any product he personally hasn’t. He’s just the one to allow art to expressively flow, as in all of his wines and also of his winery. Carl doesn’t purport to be something he’s not; however, he surrounds himself with the talent, and is considered very talented by association, because we’re still all judged by the company we keep. 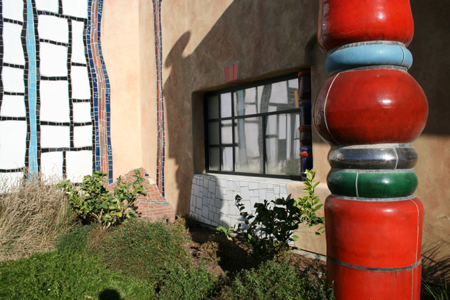 There’s something very magical about people who surround themselves with art and nature; and Carl’s not only done that (through others’ talents) figuratively, it’s also very, very literal… from the outside in.

Carl Doumani is a man who has surrounded himself with art, from his external landscape, to his winery, to the walls within his wine company, to his office that’s tastefully spilling over. His love of art is easily evident… No words have to be spoken, as art always speaks for itself. I guess that’s why when I wanted to know about Quixote Winery’s architecture, Carl just gave me his personal copy of Hundertwasser. I wasn’t comfortable taking it as a gift, because he’s obviously loved this book for a long time; but he insisted, and so it sits here before me as my treasure.

Every square inch of Quixote Winery has a rhyme and a reason, and it can be summed up in one word, aesthetics.

Carl shared that he became fascinated with Friedensreich Hundertwasser’s personality, life, and work [1928 – 2000]. As Carl explains it, “One thing led to another until Smithsonian curator Harry Rand fostered our introduction to the delightfully witty Viennese artist, architect, philosopher and environmentalist who would design our winery.” A close friendship evolved between the two men, as they worked together from 1988 to 1998, in order to plan and construct Quixote Winery.

I can only image the steps that that involved, as I reflect on my own captured images of Quixote the day I visited.

In talking about how the winery was constructed, Carl said that Hundertwasser had a lot of rules, all of which create the festive atmosphere that’s now Quixote:

Like Doumani, Hundertwasser was a rugged individualist. Always on the sidelines, both men’s view of life is that “each man is an island.” Inherent in that is the beauty, serenity, and self assuredness that comes with it; i.e., no straight lines, habitat and humanity live as one, you don’t have to have a point to have one, and being colorful is mandatory. 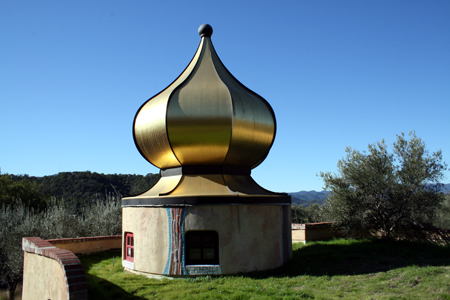 In the Destiny of Souls by Dr. Michael Newton, it’s discussed that the older a soul is, the less need there is for any support group. By that standard, that would make both of these men ancient warriors. Hundertwasser’s life evolved as an artist and architect, but never seemed to stray from his love of nature. The unique utopia that he created within his artful mind, spilled over into the environmentally conscious, architectural creation known as Quixote winery. The garden grasses in the first image above could only be drought resistant, versus those that would demand any irrigation. His lawn on the roof of Quixote allows Carl to walk home with grass beneath his feet, rather than a tarred or cement walkway, which isn’t a product of nature. 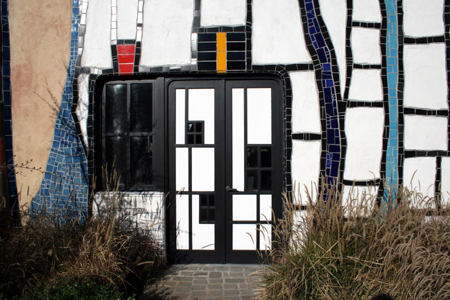 [The above image is a winter picture, so please don’t judge the winter grasses. A summer image would be much more gorgeous, but this was a winter visit.]

His alignment with Gustav Klimt, through colorful mosaic designs, was the first thing that caught my eye, as I thumbed through the book that Carl handed to me in his office… Those mosaics being very evident on Quixote’s exterior.

The rest of what Hundertwasser created is not identifiable with anyone else that I can think of in the art world. Like his art, who he was and what he created was uniquely Hundertwasser. You can witness that magic, mystery, and mosaics when you visit Quixote Winery.